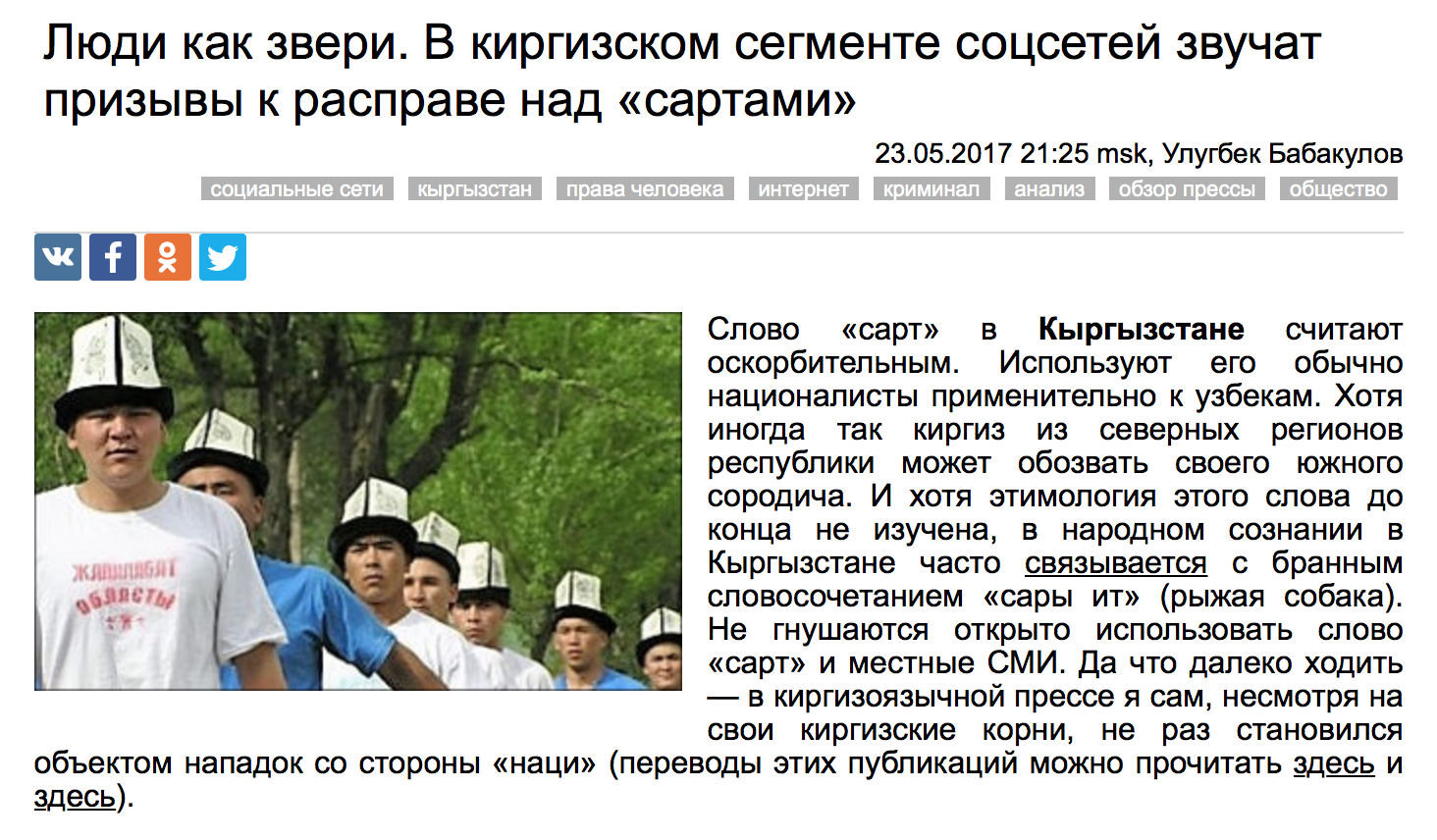 A screenshot of the article by Ulugbek Babakulov that appeared on Moscow-based website ferghana.ru on May 23.

A lawmaker in Kyrgyzstan has devised a new threat for journalists whose writing is not the public’s liking — stripping them of their citizenship.

The response was heard in parliament on June 1 in response to Ulugbek Babakulov’s recent report on signs of an apparent surge of intolerant nationalist sentiments among Kyrgyz internet users.

Babakulov’s article, which was titled “People like animals: How Kyrgyz social media is ringing to the sound of vengeance against Sarts,” appeared on Moscow-based website ferghana.ru on May 23 and immediately provoked howls of indignation. Critics of the piece have accused the journalist of smearing the Kyrgyz people and drawing gross generalizations from isolated cases of xenophobic language online.

The springboard for Babakulov’s piece was a recent violence incident in the southern Jalal-Abad region that the reporter said bore signs of an interethnic conflict, namely between Kyrgyz and Uzbek communities. Police later denied this and said the fight on May 18 was actually over a woman.

People indignant at the piece expressed anger at what they perceived as Babakulov’s misrepresentation of the incident and his bitterly ironic use of the word “sart,” a racial slur for Uzbeks that was widely used around the time of the 2010 riots in Osh and Jalal-Abad.

“As a native of the city of Osh, I am offended,” said Ainura Altynbayeva, a lawmaker. “The word ‘sart’ is considered offensive over there, and we have mothers who are weeping to this day about the deaths of children who died in the [2010] events in Osh. It is indecent to publish such article, especially on the anniversary of events that happened at the start of June.”

Her colleague, Muradyl Mademinov, agreed and said that Babakulov’s article could not go unpunished and that he should be stripped of his Kyrgyz citizenship.

The original piece was given further prominence over the weekend when the country’s public television station ran a nine-minute report lining up a number of commentators to condemn it. In the report, the commentators dubbed Babakulov an “enemy of the nation” and suggested blocking ferghana.ru.

Babakulov insisted his original intent was not to rouse hatred but rather to illustrate a creeping mood of intolerance on Kyrgyz social media.

“It suits the authorities to distract the people from social and economic problems with these nationalist themes. It cannot be ruled out that it is the authorities themselves that are ordering these kinds of post on social media,” he wrote in the piece.

The chief editor of ferghana.ru, Danil Kislov, said that the article merely reflected the real situation.

“The issue of interethnic relations remains a very contentious one in Kyrgyzstan, but it needs to be discussed openly and not stuck in the corner. But the government is going out of its way not to notice the nationalist rhetoric that is swilling around in Kyrgyz media and in Kyrgyz-language social media,” he said.