A battle is looming over whether the president is to gain or lose powers. 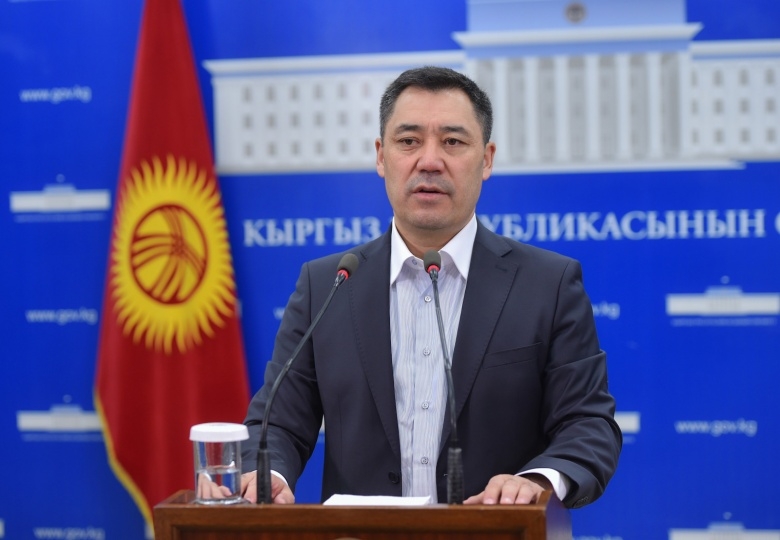 Is Japarov going to want to see his powers diluted? (Photo: Presidential administration)

Parliament in Kyrgyzstan has voted to postpone parliamentary elections and approved a proposal to overhaul the constitution, setting the stage for rival political forces to haggle furiously over how the country is to be run in future.

The bill adopted on October 22 means that do-over parliamentary elections to make up for the now-nixed vote from earlier this month could take place as late as the start of June 2021, instead of by December 20, as was previously required. Of the 120 sitting members of parliament, 83 voted in favor of the bill.

A note attached to the bill on delaying the elections stated that the proposal was motivated by a desire to “stabilize the social, political, epidemiological and economic situation in the country, and also to increase the trust of citizens in the elections.”

Numerous fixes to election laws adopted by parliament mean the elections are bound to produce a far different legislature than the one that would have emerged from the October 4 polls, which gave a crushing majority to a trio of pro-government, status quo parties.

One provision will ensure that parties will only need to overcome a threshold of 3 percent of votes cast to enter parliament, rather than the 7 percent required previously. Another change will reduce the size of the deposit contender parties must pay to the election commission from 5 million som ($62,000) to 1 million som.

Another potentially contentious amendment will scrap the Forma-2 ballot, which was a procedure whereby people could cast their vote at a precinct not in their place of residence. This provision is intended to account for the vast scale of internal migration, but election monitors say it left the system open to vote-buying. Scrapping of Forma-2 will placate critics, but it means many voters living because of work far from their official registered place of residence may end up being disenfranchised.

Much sturm und drang will now play out in the concoction of yet another version of the constitution – all business that will have to be done by January 10, according to the bill adopted by parliament.

The battle lines have already been drawn. On one side is the prime minister and acting president Sadyr Japarov, who is presumed to want more power invested in his own person. He laid out his vision in an interview to Al Jazeera aired earlier this week.

“We switched over to the parliamentary system too early. The mentality and culture of our people was not ready. If it was like in developed countries, we could have gone down this road. This can happen in 25-30 years,” he said. “I think my idea is the right one. And this is not to strengthen presidential power, but to strengthen people power.”

Japarov’s lip service to that notion is the idea of enhancing the role of a traditional format called the kurultai, whereby members of the public gather at occasional assemblies and then agree on proposals and policy critiques that they would then take to the parliament or president of the day.

Critics of such talk contend it is merely a smokescreen for a power grab by a politician who has shown no squeamishness in using strong-arm tactics in getting his way.

Veteran lawmaker Omurbek Tekebayev has thrown down the gauntlet from the opposite camp, which wants to see parliament strengthened, not diluted.

In colorful remarks to the press, Tekebayev said on October 22 that he wants to see “the parliament and the executive strengthened, and for the president to lose authority and turn into something like the English Queen.”

Japarov has said that any fixes to constitution will have to be approved in a referendum.

It is not immediately apparent precisely when either that referendum or, for that matter, a presidential election might take place. It is anticipated the latter could happen somewhere around January 10, but this is conjecture as of yet.

Japarov has negotiated himself by various, largely underhanded, expedients into the role of interim president following the resignation of President Sooronbai Jeenbekov on October 15.

Interim presidents should not by rights be permitted to run as full-time heads of state, so there are mounting suspicions that Japarov may seek to circumvent or even ignore that rule. Japarov indicated in an interview to Russian state television, though, that he accepted that it would need a change in the law before he could run for a seven-year term as president.

“It is still too early to talk about this – a decision on this matter has not been taken yet,” he said in the interview aired on October 19.