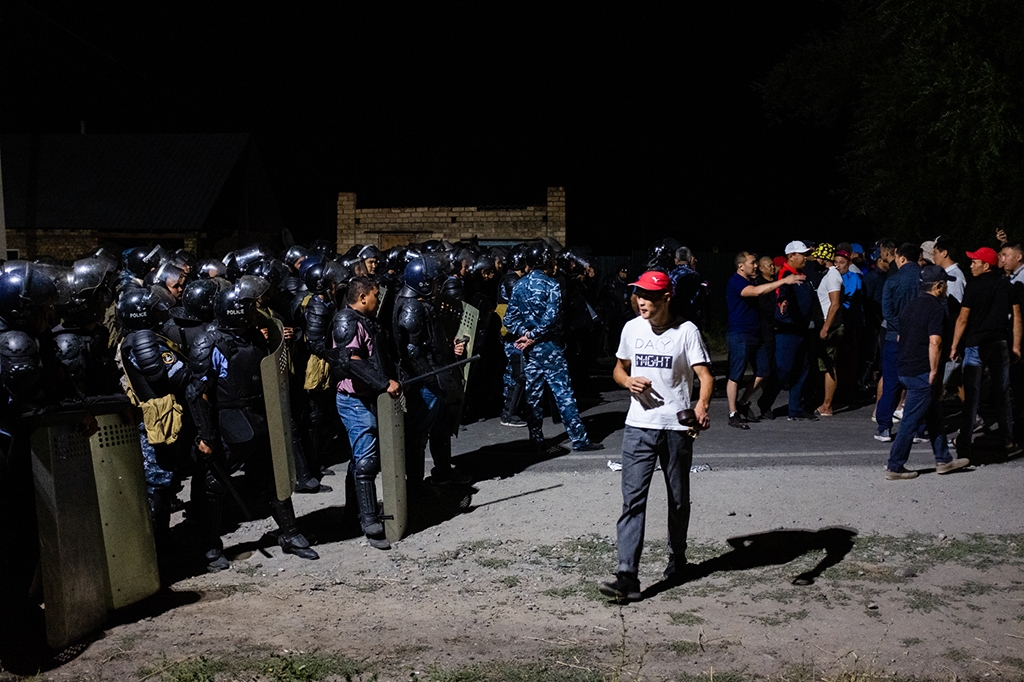 A standoff between police and rioters on August 7. (Photo: Danil Usmanov)

The prospect that Kyrgyzstan’s former president, Almazbek Atambayev, will spend the rest of his days behind bars has become a firm reality after prosecutors revealed on August 13 that he is facing charges on multiple counts, including murder.

All the charges, which include using violence against law enforcement officials, inciting mass unrest, conspiracy to murder, kidnapping and the illegal possession of weapons, stem from the disturbances that occurred when government forces last week sought to detain him at his sprawling country residence in the village of Koi-Tash.

The head of the security services, Orozbek Opumbayev, suggested that charge sheet could grow even longer, arguing that Atambayev was plotting to seize power.

Opumbayev said that Atambayev had paid 1,000 som ($14) apiece to regular citizens, including old people and children, to camp out at his home to act as a human shield in the event of a raid.

Atambayev did not make it difficult for the authorities to throw the whole criminal code at him.

A group of special forces troops was dispatched to Koi-Tash on August 7 to detain Atambayev, who had resisted multiple police summons to submit himself to questioning in relation to the early prison release of a leading gangster in 2013. Supporters of the former president mounted a robust resistance and captured several special forces soldiers in the process. At least one of the soldiers was killed during the clashes.

Atambayev surrendered the next day after the government dispatched several busloads of police officers to his compound. But even in the hours after that happened, unrest bubbled up in the center of the capital, Bishkek.

Several of Atambayev’s loyal lieutenants are in detention pending investigation. Pervomaisky district court in Bishkek ruled on August 10 that his right-hand man and former presidential chief of staff, Farid Niyazov, should remain in pretrial custody until October 8. He faces charges of hostage-taking.

A former head of the State Committee for National Security, or GKNB, Abdil Segizbayev has been summoned for questioning twice, most recently on August 13, by the Interior Ministry. Segizbayev, who said he was at his home in Koi-Tash at the time of the disturbances, told reporters he is willing to assist as a witness.

There have also been developments in the case of Aziz Batukayev, the man whose release from prison instigated this whole standoff. The Interior Ministry announced on August 13 they had detained Batukayev’s lawyer, Ali Kasymov, on suspicion that he may have been in charge of handing over a bribe in return for his client’s release.

When Batukayev, an ethnic Chechen crime boss, was released in 2013, he was only halfway through serving his 16-year prison sentence. The justification for this decision at the time was that Batukayev was suffering from leukemia and needed treatment abroad. It later emerged, however, that this diagnosis was forged.

A total of 18 people, including Atambayev, are under investigation over the Batukayev case.