The April 11 vote for 448 local councils across the country may turn out to be more consequential than usual. 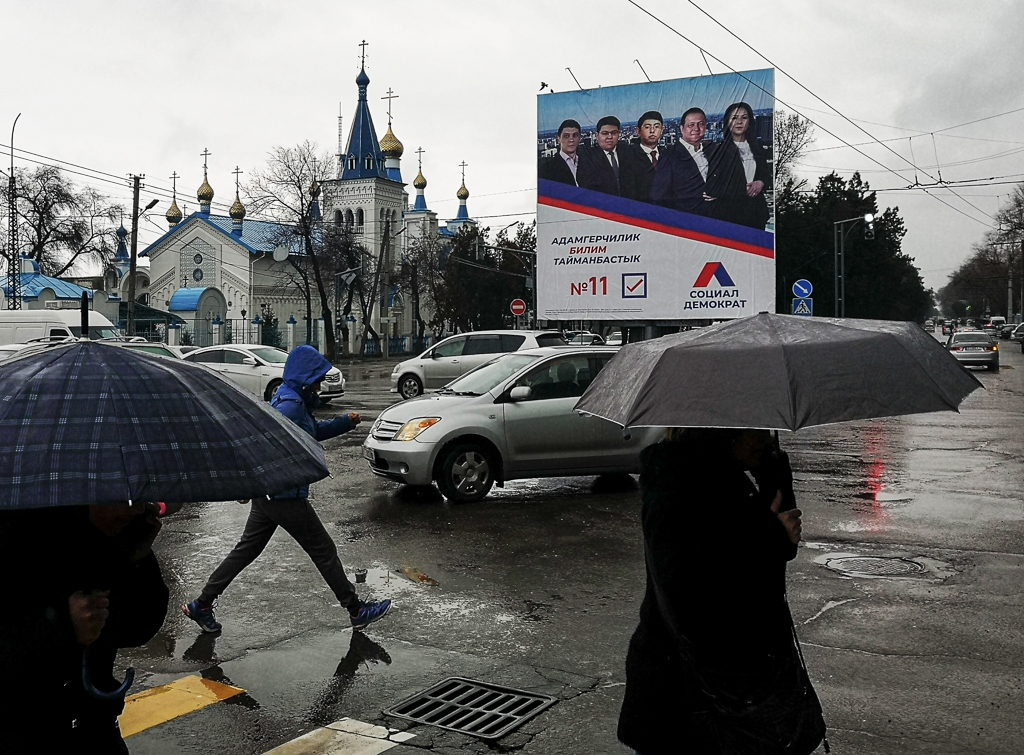 Local elections in Kyrgyzstan are always a time for sweeping promises.

Some make unrealistic but practical offers, like vowing to put an elevator in every apartment block or to provide free homes to teachers and doctors.

Others go down a more eye-catching route. This year, one party is pledging to make a bid to host the Olympics in the capital. Another wants to legalize marijuana.

Beyond this quirkiness, however, the vote to pick deputies to sit on 448 local councils across the country that is taking place on April 11 may actually turn out to be more consequential than usual. A referendum on the same date is expected to confirm a new-look constitution trimming the national parliament from 120 seats to 90. More of the legislature’s powers are accordingly being handed to the president.

“The role of parliament is shrinking sharply, and people with media clout, influence and money need to go somewhere, and so they will go to the city councils,” Bishkek-based political analyst Denis Berdakov told Eurasianet.

“And given that the republic is becoming more presidential and that the key levers are controlled by the president, the formation of local councils has been thrown open to free democratic elections, as paradoxical as that might seem,” he said.

Nowhere is the tussle for seats as crowded as the capital, Bishkek, a teeming and increasingly polluted and built-up home to more than a million people. There, almost 1,900 candidates put forward by 25 parties are running for 45 spots on the council.

The appeal of sitting on a local council is not immediate. There is no salary and deputies do not get the perks of their national counterparts, like expenses, paid housing or a car. The work is low-profile and often involves unglamorous matters like overseeing the maintenance of utilities and roads.

But one upside for the profit-minded, especially in Bishkek, has been that local deputies have the authority to decide on the use of municipal land. Namely, whether it should and can be leased to private developers or if construction is permitted on the spot. It may be no coincidence that by one estimate, one-third of the outgoing Bishkek city council members are involved in the building industry.

Sure enough, in 2019, the Bishkek city council adopted a Detailed Planning Project that envisioned pulling down swathes of Soviet-era buildings, many of them solid Stalin-era edifices, and replacing them with taller apartments. The plan was scrapped only amid much objection from citizens and the intervention of prosecutors.

Ambitious candidates usually hitch their wagon to political parties with a confirmed brand, but such have been the convulsions in Kyrgyzstan over the past year that the options are limited.

Parties linked to former President Sooronbai Jeenbekov, who was forced to step down in October, and another said to be bankrolled by convicted, corrupt former customs boss Rayimbek Matraimov have withered away. For different reasons, so has the Mekenchil party co-founded by current President Sadyr Japarov.

Berdakov said that in the absence of any ruling party coming to fore and a lack of clear favorite, smaller parties on paper have a better chance than usual.

“These elections are relatively free and competitive,” he said. “We do not see systemic use of administrative resources and corruption, and so why not take part?”

Still, talk of a scene dominated by new parties may be a little overstated. As news website Kloop has found, local council election party lists include dozens of familiar names – people who have previously tried to run for parliament with those aforementioned parties linked to Jeenbekov and Matraimov, but who have since turned coat.

And even though Japarov has professed to be opposed to the very idea of a “ruling party,” Ata-Jurt Kyrgyzstan features a suspiciously large number of his close allies among its ranks. One candidate for the party running in the southern Jalal-Abad region is 27-year-old Tai-Muras Tashiyev, a son of the current head of the security services and a longtime Japarov associate, Kamchybek Tashiyev.

Just to drive the message home, Tashiyev senior this week wished his son success in the vote.

“Better he serve the people than just loitering in the streets,” the head of State Committee for National Security reportedly said.

In one encouraging detail for the smaller parties in Bishkek, who also include the liberal Reforma party, the target number of votes needed to get onto the council is relatively small.

As elections expert Atyr Abdrakhmatova explained in an interview with Eurasianet, only around 418,000 residents of Bishkek have the right to vote. She estimates that less than half of that total will actually turn out. Deepening cynicism over the electoral process is in part to blame.

“People have lost faith because the same people keep getting elected and failing to keep their sky-high promises,” Abdrakhmatova said.

If Abdrakhmatova’s forecasts come to pass, it would mean that parties might need no more than 13,000 votes to get a representative on the council.