Kyrgyzstan Looks to Alternative Fuels Ahead of Looming Winter Shortages 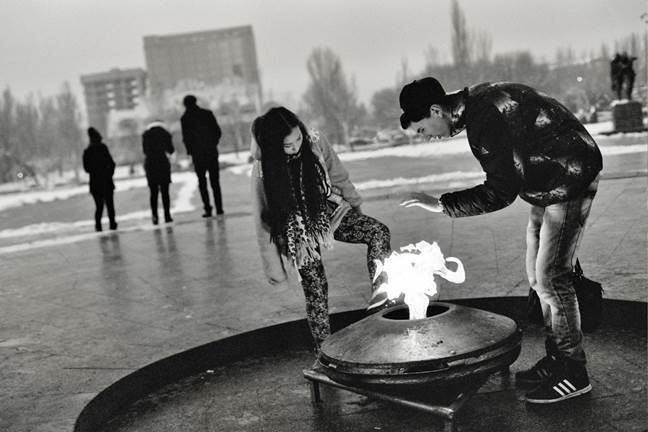 Young people heat themselves by the eternal flame at a WWII monument in Bishkek last February. Each winter in Kyrgyzstan the energy situation seems to worsen; blackouts last longer, and officials seem less able to do anything to improve conditions. This year is expected to be particularly difficult. (Photo: David Trilling)

Each winter in Kyrgyzstan the energy situation seems to worsen; blackouts last longer, and officials seem less able to do anything to improve conditions. This year is expected to be particularly difficult.

The winter heating season has not even begun and already lots of people are bracing for months of hardship. A video, posted October 12 on YouTube, depicting Kyrgyz doctors having to perform open-heart surgery amid a sudden blackout, is helping to heighten anxiety about the coming winter. In another alarming signal, Bishkek’s local energy-distribution company, Severelectro, sent out advisories with recent utility bills, describing the situation as “critical” and begging customers to conserve electricity and use alternatives to heat their homes.

Southern Kyrgyzstan has been without gas since April, when Russia’s Gazprom took over the country’s gas network, and neighboring Uzbekistan said it would not work with the Russians. That has forced residents in the south to use precious and expensive electricity to cook, or resort to burning dung and sometimes even furniture. On top of that, a drought has hampered operations at Kyrgyzstan’s main hydroelectric plant at the aging Toktogul Dam.

After President Almazbek Atambayev criticized the energy minister on October 9, the minister promptly quit. But a personnel reshuffle will not do much to reassure citizens, such as pensioner Valentina Chebotok, who lives in Maevka, a Bishkek suburb. When she began to contemplate the hassles associated with winter, Chebotok started to cry. Last year, when temperatures dropped to -20C (-4F), the 89-year-old pensioner spent three months living in a vegetable storage shed with a small stove she kept going with a mix of coal dust and dung. This year, Chebotok managed to secure a gas heater, but on her pension of $87 per month she will have to use it sparingly.

There has been some good news: Kazakhstan agreed on October 14 to supply over 1 billion kWh of electricity this fall and winter. In September, the Russian energy giant Gazprom announced gas prices for exports to northern Kyrgyzstan – that is, the only areas connected to its network, since Uzbekistan refuses to supply its gas to the southern network – would fall 20 percent.

But in many parts of the country the electrical system is overloaded. Prior to the Gazprom deal, many consumers grew tired of constant gas shortages, and converted their heating systems to run on electricity. That is what Maksim Tsai, a mechanical engineer in Bishkek, did seven years ago. “I was forced to switch to electric heating. And Kyrgyzstan was [at the time] considered a country with abundant electricity,” he told EurasiaNet.org.

Citing a need to conserve electricity, government officials have made often contradictory statements about the type of three-phase electrical adaptors that Tsai and many others now use. Some officials have said they want to ban three-phase adaptors, which can support higher electricity loads; others express an interest in increasing tariffs for three-phase households. Tsai said he now plans to switch back to gas. “The government took the right decision to transfer Kyrgyzgaz to Gazprom. Now I have got assurance that we won’t have problems with gas, though it is still expensive,” he said.

The current confusion offers crooked officials an opportunity to line their pockets. A hotel owner in Bishkek complained in September that Severelectro officials came to his business and attempted to seize his three-phase adaptor. “They came over and made us sign a document saying that we understood why the three-phase adaptor was being confiscated. We asked for a copy of the document, but they said we couldn’t get one because ‘we don’t want the press to get hold of this.’ We were allowed to keep our adaptor after we paid a bribe,” the hotel owner said.

The officials warned the hotel owner to expect blackouts this winter at his central Bishkek location, “‘Maybe five hours a day, maybe more, they said.’”

Another heating alternative is coal. In August, Prime Minister Djoomart Otorbaev called on Kyrgyzstanis to use coal this winter for heating, since it is “a relatively inexpensive fuel.”

Though Kyrgyzstan is endowed with plenty of coal, the industry is plagued by scandals and, reportedly, organized criminal activity – factors that drive up prices and force consumers, including government agencies, to buy imports.

Sultanbek Dzholdoshbaev, a wholesaler at the main coal market outside of Bishkek, said that supplies from the famed and fought-over Kara-Keche deposit have decreased in recent years, pushing up prices. He explained that local gangs took control of Kara-Keche during the chaos following President Kurmanbek Bakiyev’s 2010 overthrow. Moreover, the state-run company that manages Kara-Keche is unable to run such a large-scale operation efficiently, Dzholdoshbaev asserted.

Meanwhile, prices keep rising. According to sellers and buyers at the coal market, the price for a ton of coal has increased 25 to 35 percent this season. That might be in part due to demand. Delivery-truck drivers say demand has been high since August, when the government started warning about the tough winter ahead.

If those living in freestanding homes have options, such as gas and coal, the tens of thousands of Bishkek residents living in multi-story buildings with central heating provided by Severelectro have only electricity as backup.

Larisa Musuralieva, who lives in an apartment block in a southern district of the capital, said that the old radiators in her flat do not provide sufficient warmth: “These radiators heat so badly […] so we use an electric heater. If blackouts happen this winter, it will be very cold at home.”