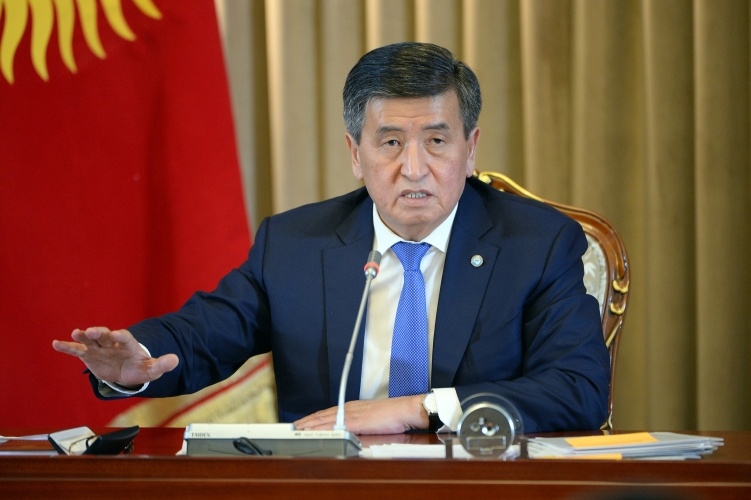 The annual marathon end-of-year press conference with Kyrgyzstan’s president can normally be relied upon to produce useful news tidbits.

Sooronbai Jeenbekov is no showman, however, so the December 19 event proved a low-wattage affair.

The report for Jeenbekov’s first year in office is a mixed bag. He has won praise in some quarters for breaking ties with his mercurial predecessor, Almazbek Atambayev. But beyond that, Jeenbekov is struggling to convince many he is the solution to Kyrgyzstan’s problems rather than part of them.

Politicians jailed on spurious grounds during Atambayev’s rule are still languishing in prison. Suggestions that Jeenbekov’s relatives are amassing power and influence are gaining traction. Impunity and corruption remain hallmarks of the system.

When reporters quizzed him on this, the president offered little more than the verbal equivalent of a shrug.

One name that cropped up repeatedly during the three-hour press event was that of Rayimbek Matraimov, a former high-ranking customs officer. Matraimov, popuarly known as Rayim Million for his family’s ostentatious displays of wealth, is widely viewed as a crooked political cash-cow. Rumors he part-financed Jeenbekov’s successful election campaign last year are rife and have gone some way toward undermining talk of the “battle against corruption.”

Matraimov's brother, Iskender Matraimov, is a lawmaker supportive of the new president.

Jeenbekov promised to study one journalist’s investigation into the Matraimov family’s sources of wealth but said he found the recent rush to see them face justice “illogical.” He also argued the customs chief was the previous leadership’s monster.

“[Matraimov] did not build houses and mansions during my presidency. But we will definitely check everything out,” Jeenbekov said.

Absolution of responsibility and ignorance were key themes of the press event.

Jeenbekov said it was inappropriate for a president to pardon jailed politicians unless they expressly asked for it.

He claimed not to have known that one of his in-laws had taken up a plum job at the state telecommunications company in November. The in-law in question resigned almost immediately when news of the appointment appeared in the press.

Later, he stated he had no plans to lift criminal charges against his erstwhile electoral rival Omurbek Babanov, who left the country under intense pressure from authorities loyal to then-President Atambayev.

“A president doesn’t open and close cases,” Jeenbekov said of Babanov, whose return to the political scene is being lobbied for by supporters.

Jeenbekov neglected to add that the state organs that do so are under his direct control.

Ever since he cemented power, Jeenbekov has been reluctant to talk about the people that helped him get there.

Recent months have seen allegations of electoral campaign finance violations surface with the publication of a claimed bookkeeping leak.

A former advisor of Jeenbekov’s and a key consultant for the campaign, meanwhile, has told media that he fled the country in fear of being jailed for knowing too much.

Jeenbekov distanced himself from the political consultant, Aleksei Vasilievetsky, whom he said had been thrust upon him by Atambayev allies against his will when he was still serving as prime minister.

“I said that I didn’t need advisors. I grew up with farmers. Everything is simple and clear for me,” he said.

Hanging over the press-conference from the start was Jeenbekov’s ongoing feud with Atambayev.

One parliamentarian speaking on December 19 was applauded in the legislature for suggesting the pair make up for the good of the country.

Presidents are limited to a single six-year term under Kyrgyzstan's constitution, but Atambayev used all the tools he had to help secure his underling's electoral victory.

His expectations of subsequent influence were shut down sharply by Jeenbekov's camp and Atambayev lashed out at the new leader in public in March.

Jeenbekov was at pains to avoid mentioning his former ally throughout the presser, but intimated he had no regrets over the split.