Behind a Facebook argument about architecture in Kyrgyzstan is a knottier tale of rival politics and geopolitical allegiances. 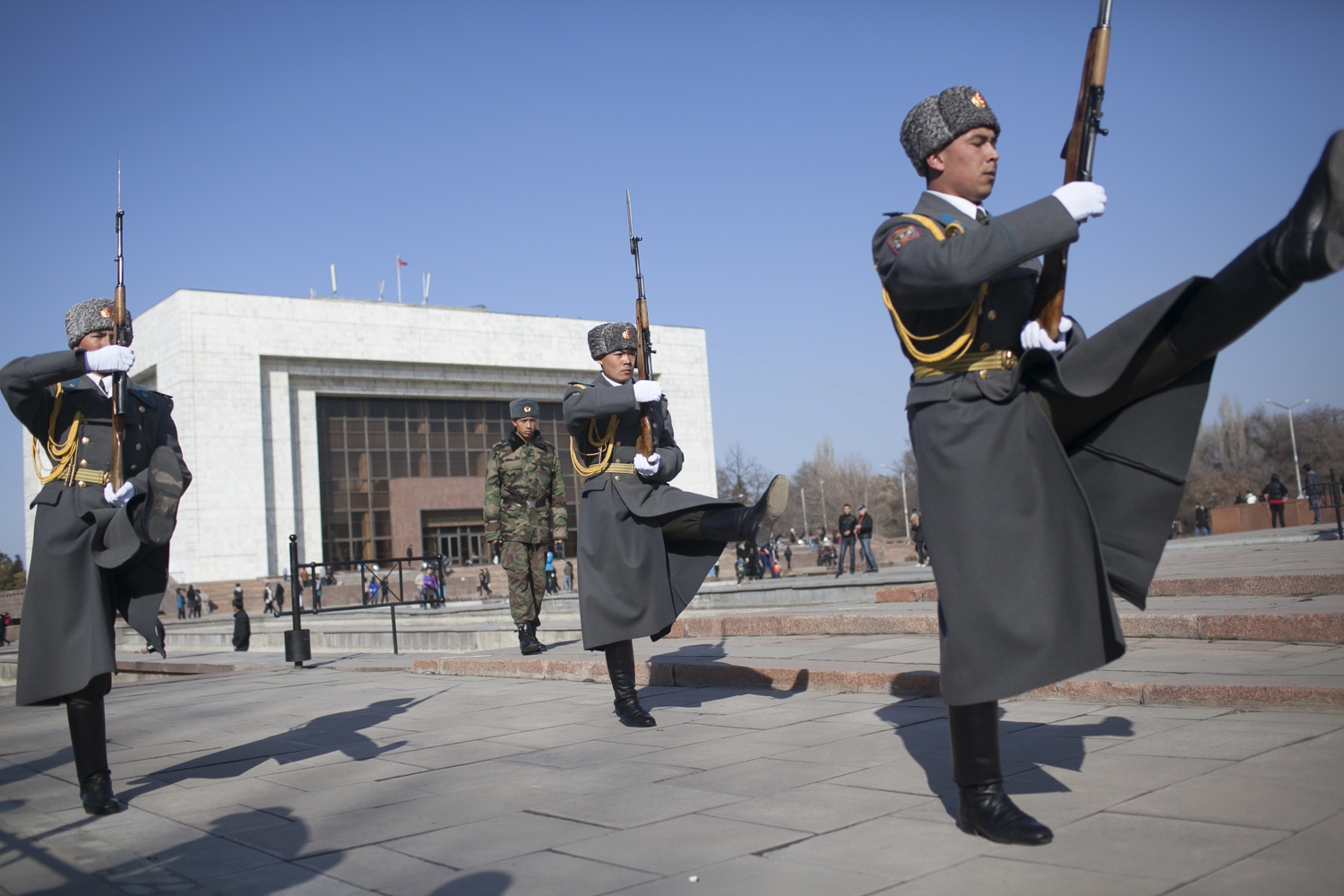 Temir Bolotbek feels strongly about architecture. So much so, that a squabble over Soviet buildings he got into earlier this year could land him in jail for up to seven years.

Like many modern-day arguments, this one played out over the internet. The exchange became so heated that Bolotbek was eventually summoned by prosecutors in Kyrgyzstan on charges of inciting ethnic hatred. The reaction apparently reflects authorities’ unease over the risks of incendiary language online. And behind the story about freedom of expression is a knottier tale of rival politics and geopolitical allegiances.

Bolotbek, a 38-year-old professor at the Kyrgyz State University of Construction, Transportation and Architecture, was at home one evening in January when it all began.

“It was a regular day. I was sitting on the sofa, scrolling through my timeline and then I got involved in this argument,” he said.

His attention was drawn by a Facebook status update about Kyrgyzstan’s capital, Bishkek, posted by well-known journalist Dina Maslova. The post consisted of an unremarkable black-and-white photo from 1984, when the city was still a sleepy, leafy backwater known as Frunze, and a wistful comment: “This crossroad looked so good then — no unsightly advertisements or traffic jams.”

Such wistfulness is like red rag to a bull to those who disdain the nation’s Communist past. A commonly deployed insult for people perceived as mindlessly nurturing fond memories of those times is sovok, a slur that is usually reserved to describe a Soviet-style mindset.

“Stinking, backward, dull sovoks! Architecture? Anybody who calls this bog-standard architecture knows nothing about architecture,” he wrote.

The dispute then broadened as his opponents argued that life in Bishkek was better in Soviet times. So Bolotbek doubled down.

“Why don’t lovers of this sovok stuff get back to your rashka, somewhere in Siberia. There is enough dreary, miserable, slavish shit over there,” he wrote.

This was the comment that landed him in court. A language analyst working for prosecutors has argued that the words constituted an “affront to ethnic dignity” and “exclusionary propaganda.” One term in the comment, which is not easily rendered into English, sticks out. Rashka was a slang term coined by Russian internet users to decry squalid provincialism and degradation in their own country, but the word has been eagerly claimed by Russia-bashers elsewhere, most especially in Ukraine.

Although Bolotbek freely admits his language crossed a line, he says he was amazed it was found to contain exclusionary intent. He said that the reason he got involved in the conversation in the first place was that it touched an issue close to his heart.

“That was simply my reaction,” he said.

The Facebook row is partly about a generational divide. Bolotbek came of age in the 1990s, after the Soviet Union had collapsed.

“It was a time of freedom. We grew up on American films and music. We were strongly affected by the first wave of freedom, democracy and liberalism,” he said.

And then there are the politics. There have been similar social media activity-linked criminal trials before, but Bolotbek’s case has drawn more attention.

At the first two hearings to have taken place so far, at Bishkek’s Pervomaisky district court, many of the professor’s supporters in attendance were members of a Facebook group called “Kyrgyzstan Against the Customs Union.” Opposition to the Russia-led trading bloc, which has been rebranded Eurasian Economic Union, and rejection of all that Moscow represents is a relatively heterodox pursuit. Contempt for anything Soviet typically flows out of a dislike for the authoritarian vision of governance advanced by Russia, and vice versa. Bolotbek was one of the founding members of “Kyrgyzstan Against the Customs Union.”

“We believe that the development of Kyrgyzstan should be closely linked with democratic developments. And this is first and foremost in economic affairs,” Bolotbek said, explaining his rejection of the Russian-dominated trade bloc. “This union is a union of authoritarian regimes.”

Many of those who came to support Bolotbek at the Pervomaisky court had never met him in person.

“He is just being harassed. I came here on a point of principle,” said Ulan Djumaliyev, who met Bolotbek in court for the first time.

There is a camp on Facebook that is gleeful about the professor’s downfall, however. Some have dredged up a 2013 post in which he allegedly likened the Soviet Red Army to terrorists — a parallel deemed heretical and poisonously disrespectful of World War II veterans.

Seeking out that kind of incriminating content constitutes the raison d’être for online groups like “Kompromat on the Fifth Column.” That is a meeting place for those like Alina Nazaralieva, who decry what they perceive as the treacherous pro-Western elements in Kyrgyz society.

“He sits there with that expression on his face like he just pooped his pants. He insulted World War II veterans and wished them an early death,” Nazaralieva wrote on the group’s page recently. “Even if they do not put him away, this will be a stern warning for the [U.S.] State Department-backed lot at ‘Kyrgyzstan against the Customs Union’.”

The tenor and content of that broadside offers another insight into Kyrgyzstan’s political fault-lines. Criticism of Russia is often implicitly identified with reflexive pro-Western positions and many conspiratorially minded types believe people holding such opinions are secretly fostered and funded by Washington.

‘We will have to self-censor’

There is a precedent in Kyrgyzstan for criminal trials being sparked by something as slight as voicing approval for an online message. Those have typically ended either in suspended sentences or a jail term.

In October 2015, the imam of the mosque in the southern town of Kara-Suu was sentenced to five years in jail for purportedly supporting the formation of an Islamic Caliphate. During the trial, a 20-year-old resident of the same town, Abdullo Nurmatov, upvoted a photograph of the imam posted on Russian-owned social media website Odnoklassniki. That same day, security services agents raided Nurmatov’s home for three hours and then placed him at a pretrial detention facility.

Nurmatov describes his two-day stay in the holding cells as a traumatic experience.

“They insulted, demeaned and beat me. I lost consciousness. I don’t remember how much time went by. They soaked me with water and again beat me,” he said. “Only after I gave my password and, under pressure, signed some papers did they let me see my lawyer and father.”

At the end of his trial, Nurmatov was given a suspended sentence.

Unlike Nurmatov, Bolotbek and his lawyer will need to secure a full acquittal to avoid prison time. In 2016, the option of a suspended sentence or an administrative penalty for incitements to religious and ethnic hatred was scrapped from the criminal code. The offense envisions sentences of anything between four and seven years in prison.

While the potential costs of falling foul of the law have become more grave, the rules themselves remain subject to highly subjective interpretations. And as Altynai Isayeva, a lawyer at the Bishkek-based Media Policy Institute, has argued, another major drawback of the legislation under which Bolotbek is being prosecuted is that there is no clear correlation between the penalty envisioned and the gravity of the original alleged incitement.

“It is one thing when they try people who are truly engaged in extremist activities, but another when they are putting people on trial without any grounds. And these people are sent to serve out real sentences alongside genuine extremists in high-security prisons,” Isayeva said.

Isayeva said that she is particularly concerned that the law has not been properly explained to the general public.

“Changes were made to the law, but nobody really knows about them. A certain circle of people know — experts, journalists, civic activists. Simple people do not fully understand that for something that they said online they could end up with real prison sentences,” she said.

For the time being, Bolotbek is enjoying tacit support from his employers. Explaining their decision to refrain from firing the scholar, the rector at the university said that he cannot “shut the mouth of a tenured professor.”

But Bolotbek has already pledged he will avoid Facebook arguments from now on.

“Usually, when people write to one another, especially when they are debating on Facebook, they write things with passion. Now it seems like we will have to engage in self-censorship,” he said.