Taking part in foreign conflicts can be punished by up to eight years in prison. 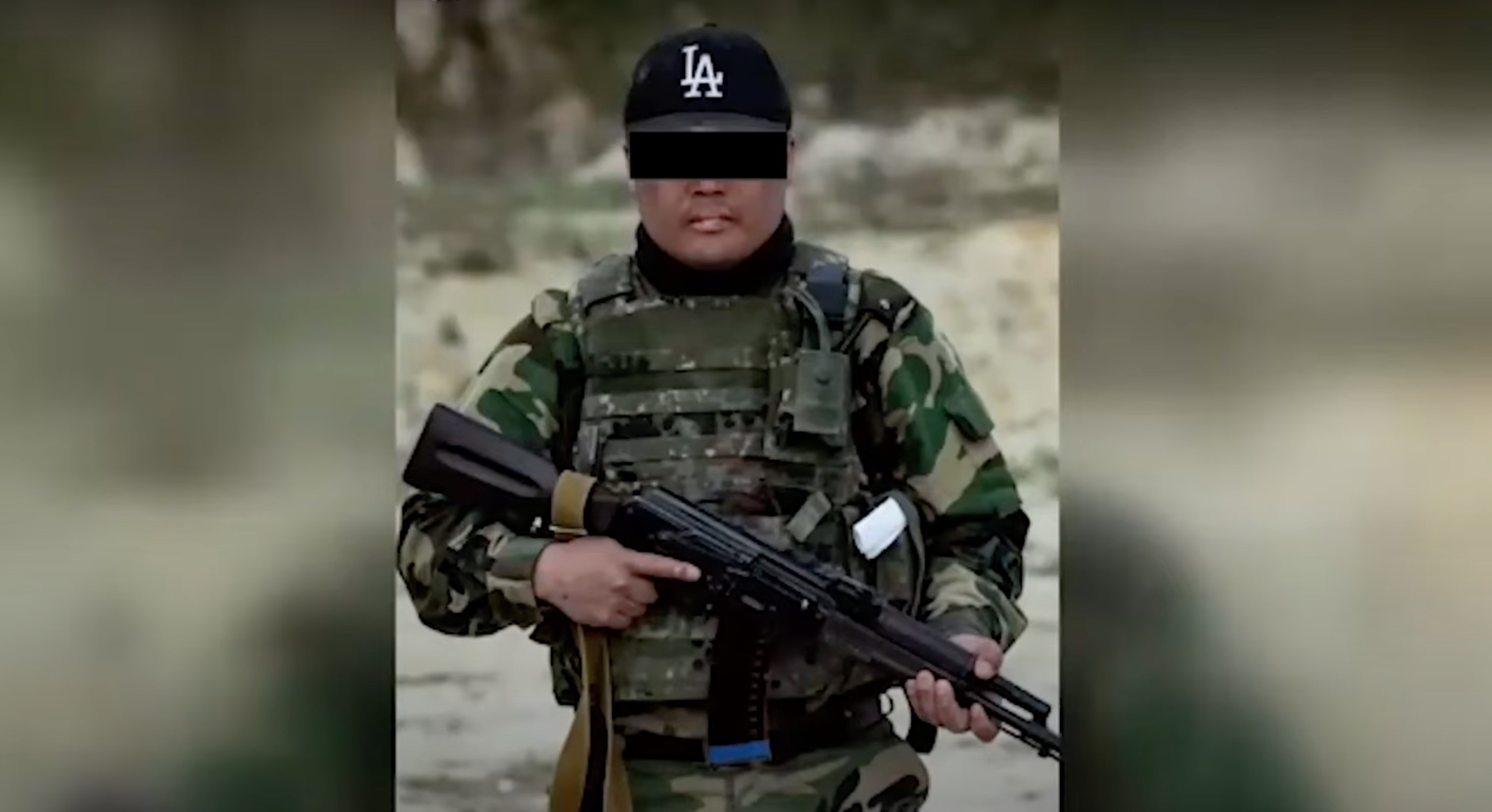 Screenshot from a GKNB-circulated video.

The security services in Kyrgyzstan last week announced that they are filing charges against a Kyrgyz national who they say is engaged in fighting with Ukrainian forces against the invading Russian army.

Along with its May 14 statement, the State Committee for National Security, or GKNB, released video footage of the young man, who has been identified only by his initials, wearing a military uniform and handling weapons.

Threats to prosecute the man have again highlighted the awkward line that Kyrgyzstan is having to tread over the war in Ukraine. While wishing to refrain from being perceived as fully endorsing Russia’s actions, Bishkek also wants to signal to Moscow that it is taking a hard line against what could be perceived as excessively overt gestures of support for Kyiv.

This marks the first criminal case against a Kyrgyz national for involvement in the war in Ukraine. The charge, for participating in hostilities on foreign soil, has typically been used against volunteers in the ranks of radical Islamic groups in places like Syria, Iraq and Afghanistan. It can incur prison sentences of up to eight years.

From the trail of clues available from the suspect’s social media activity, it appears that he had traveled to Ukraine in December, but that he decided to stay on and assist the defense effort after fighting broke out on February 24.

Some confusion about his exact role has been created by remarks made by Kyrgyzstan’s ambassador to Ukraine, Idris Kadyrkulov, after the GKNB announced the charges.

“It appears that he assists orderlies to [the Ukrainian] territorial defense units,” said the ambassador, thereby suggesting that the man was not directly involved in fighting.

Kadyrkulov said his embassy had offered the man assistance in returning to his home country but that the offer was refused.

This is not, in fact, the first known case of a Kyrgyz national playing an accessory role to the Ukrainian armed forces, which has raised questions about why the GKNB only chose to file a case in this instance.

Earlier this month, RFE/RL’s Kyrgyz service interviewed a man identified only by the pseudonym Kubanych uulu Dayirbek, who told the broadcaster he had likewise enlisted as an orderly in the Ukrainian army. Dayirbek had also gone to Ukraine in search of work and decided to stay once war broke out.

“We basically do not take part in clashes. We are engaged in the removal of the wounded from the red zone to safe areas,” Dayirbek said in the interview.

Bishkek has floundered in taking a categorical position on the war ever since hostilities began in February.

In a Kremlin readout of the call, Japarov appeared to pin the blame for the conflict on Ukrainians, whom he accused of failing to abide by the terms of the 2014 Minsk peace agreement. The Russian statement likewise had Japarov expressing “support for the decisive action taken by the Russian side to protect the civilian population of the Donbass.”

Japarov’s own office put out a more neutered account, neither confirming nor denying the Kremlin readout, but noting only that the two leaders “exchanged opinions on international and regional security issues, including the situation unfolding around Ukraine.” Japarov’s spokesman later tried to clarify further by insisting that Bishkek favored negotiations as a way to prevent further death and destruction, but this was not enough to prevent the spat that followed.

On March 1, Ukraine’s President Volodomyr Zelenskiy declared at an emotionally charged briefing that Kyiv was recalling its ambassador to Bishkek “following Kyrgyzstan's statements to justify the aggression against Ukraine.”

A plausible explanation for Kyrgyzstan scrambling to pursue this particular criminal case is so that it might deter any of the several dozen Kyrgyz nationals still known to be in Ukraine from following the example of the man wanted by the GKNB. The secretary of the Security Council, Marat Imankulov, has again warned that Kyrgyz “citizens are forbidden from taking part in armed clashes abroad.”

What is unclear is whether this warning also extends to Kyrgyz nationals enlisting in the ranks of the Russian armed forces. All the Kyrgyz-born people who have reportedly died to date fighting for the Russians had previously obtained Russian citizenship, according to media reports. Should that change, it would be only further implicit confirmation of the depth of Bishkek’s loyalty to Moscow.