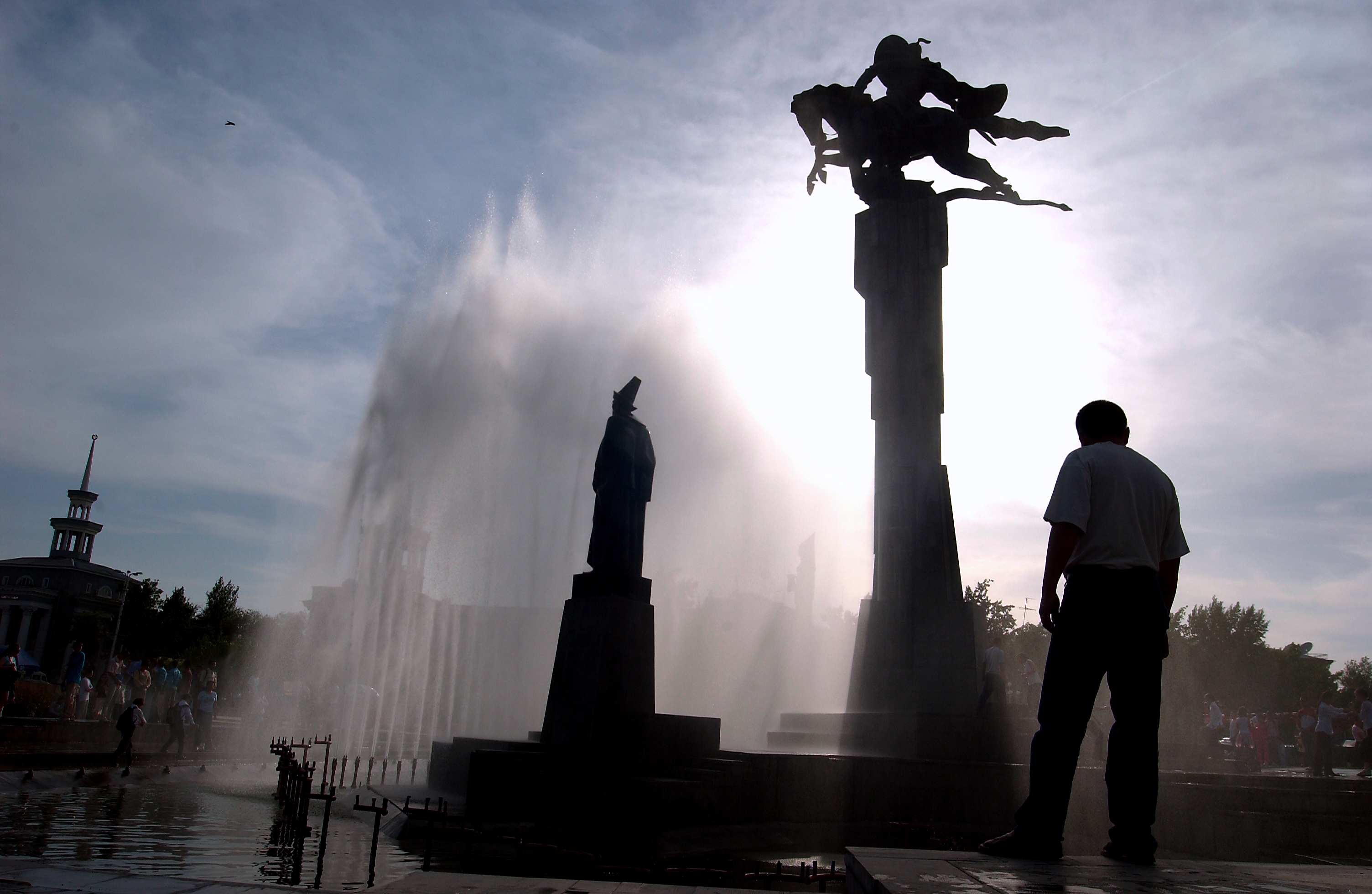 All Manas, all the time in Kyrgyzstan? (Photo: Dean C.K. Cox)

In the weeks since Kyrgyzstan’s authorities tore down a monument to freedom in Bishkek’s central square, vowing to replace it with a statue of the legendary Manas, a campaign to rename the capital after the mythical hero is gaining momentum. But how much Manas can Kyrgyzstan handle?

Historians cast doubt over the existence of Manas, the title character of an oral epic sung by revered elders. But to do so in domestic political circles is tantamount to heresy: Manas is the ultimate national symbol, the cornerstone of a pre-Soviet, pre-Islamic, nomadic Kyrgyz identity.

As a presidential race competes in fanfare with the country’s 20th anniversary of independence on August 31, populist politicians are indulging in another round of what a local blogger calls “Manas mania.” And the phenomenon may have serious implications for the beleaguered state budget and the country’s fragile ethnic harmony.

Bolstered by one of President Roza Otunbayeva’s advisors, the renaming proposal – which neither the government nor the mayor backs, according to local press reports – has gained support among some academics and ordinary Kyrgyz, who see it as an opportunity for a national revival. Elmira Kuchumkulova, an anthropologist at the University of Central Asia in Bishkek, argues that the epic, which fans boast is the longest in history, could be harnessed as a “source of unity” after a year of events that threatened the very existence of the impoverished, divided state.

“The value of the epic lies in the idea of the hero that united all the Kyrgyz tribes,” Kuchumkulova told EurasiaNet.org. “That is the idea that state officials who support this [renaming] idea are using -- Manas as someone who united a nation.”

However, Kuchumkulova, who has translated parts of the epic into English, acknowledges it is “poorly understood.” Passed orally until it was first committed to paper by Russian ethnographers, the tale is vulnerable to revision and manipulation.

The country’s first president, Askar Akayev, emphasized the myriad tribal identities of Manas’ soldiers, his posse of international advisors and his cosmopolitan taste in wives. The epic subsequently earned the attention of UNESCO, which declared 1995 the “Year of Manas.” Statues of the hero appeared across the country, and one of Bishkek’s main thoroughfares was renamed after him, along with the country’s main airport (currently home to a US military base, schools, a university, and cultural centers).

In the nationalist political climate, however, ethnically inclusive aspects of the epic have been ignored and Manas is celebrated as the consummate Kyrgyz hero, not a hero for all who live in Kyrgyzstan. A major advocate of the name change, presidential advisor Topchubek Turganaliev, has a track record of proposing controversial legislation that seeks to grant ethnic Kyrgyz greater rights than minorities. Turganaliev has also referred to Kyrgyz who don’t speak the language as “not full-blooded.”

In addition to noting that Manas bears little significance for the 30 percent of the population that belong to minority groups, many commentators are appalled by the potential financial consequences of renaming the capital - again.

“How many times can we rebrand?” muses Elmira Nogoibaeva, head of Polis-Asia, a think-tank. “We have already done one rebranding, after independence, 20 years ago [when the Soviet capital Frunze was renamed Bishkek]. Rebranding a second time would place a massive burden on the limited resources available to the state.” Nogoibaeva estimates the name change could cost as much as 1 billion som (roughly $22,300,000).

“All of these proclamations are connected to the [presidential] election campaigns. Each candidate is trying to make a bigger and bolder proclamation than the one before him,” Nogoibaeva continued, “instead of trying to solve the country’s problems with concrete programs.”

Manas is “a symbol of the past. We cannot transport him into the future,” she said.

Some observers also cite a separate concern – that any attempt at renaming the capital could turn Kyrgyzstan into a laughing stock.

“Even ignoring the potential cost to the national budget, there are practical implications,” a senior western aid official told EurasiaNet.org. “In diplomatic speak, it is common to substitute a country’s name with the name of its capital. So you talk about ‘Tashkent’s position’ on something or ‘Beijing’s reaction’ to a specific world event.”

If Otunbayeva or the national parliament were to endorse the proposed name change, the diplomat added, “It would be like referring to Britain as King Arthur or Greece as Hercules. Foreign officials and donors would struggle to take the government seriously.”