Government critics have warned of a "slide into authoritarianism." 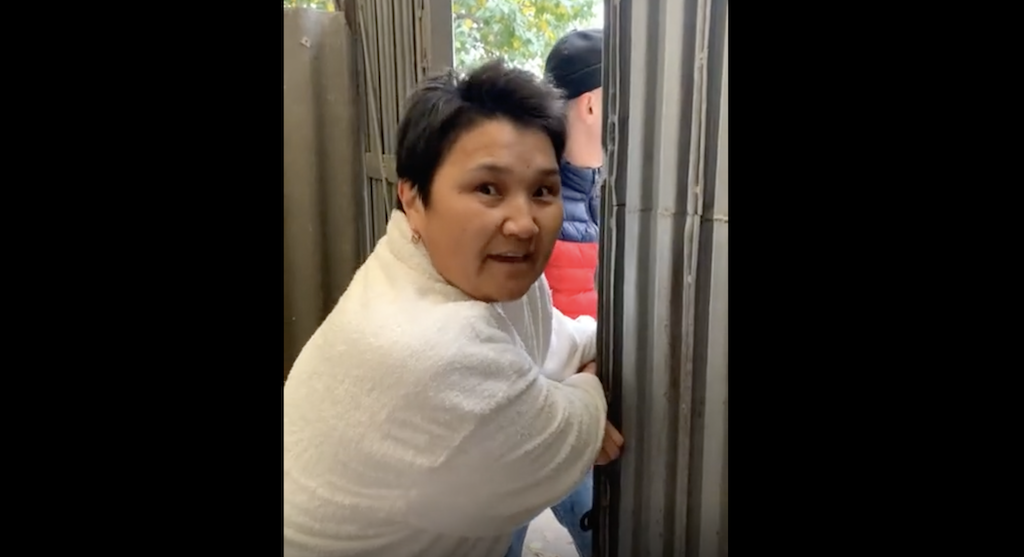 Rita Karasartova attempting to stop police officers from getting into her house on October 23.

At least a dozen activists and politicians in Kyrgyzstan have been detained in what their supporters say is a reprisal for their opposition to a government plan to hand over a reservoir to Uzbekistan as part of a historic border demarcation agreement.

Demonstrators held a picket in the evening on October 23 to demand the release of the arrested people and an end to political persecution.

The day began with police searches of the homes of multiple members of a newly created group dubbed the Committee for the Protection of Kempir-Abad. Many of the people targeted in this way – including opposition politician Ravshan Jeenbekov, former judge Klara Sooronkulova, and rights activist Rita Karasartova – were later placed under arrest for 48 hours.

The Interior Ministry has said that the detained individuals are suspected of plotting to organize mass unrest.

“In the course of special investigative activities, evidence was obtained of the involvement of these individuals in organizing and preparing mass riots, to be followed by the illegal seizure of power,” the ministry said in a statement.

The government has been bullish in fighting back against claims that a planned land swap with Uzbekistan constitutes a giveaway of territory.

“For a start, we are not giving away Kempir-Abad,” President Sadyr Japarov told state-owned news agency Kabar in an interview on October 22. “On the contrary, we are getting it back. Since the 1960s, they [Uzbekistan] have controlled the dam. Now we have decided to create a 50-50 joint venture and we will manage the dam together.”

Japarov took specific aim at the opponents of the border agreement, calling them “provocateurs.”

“Their aim is to create conflict and cause an uprising in the country. We will not permit that,” he said.

The arrests occurred less than 24 hours after that interview’s publication.

Opposition activists are intending, despite the arrests, to hold a rally against the Kempir-Abad deal in Bishkek on October 24. The plan for the demonstration is to parade through the capital and gather at the government headquarters at midday.

Much of the frustration over the border agreement stems from how the ratification process is being handled in parliament. When an international affairs and defense committee in the Jogorku Kenesh, the legislature, convened to approve the deal on October 10, the hearing was held behind closed doors. Lawmakers have only been able to see part of the text of the protocol with Uzbekistan.

The justification offered by the head of the security services for this secretiveness has been to say that the text could be taken out of context and used to incite public commotion.

“It is so somebody doesn’t go and cut out the bits they need from the draft agreement and protocols that we are signing with Uzbekistan and then give the people incorrect information to whip them up against [the deal],” the security services chief, Kamchybek Tashiyev, told lawmakers.

As arch-nationalists whose appeal hinges heavily on their claims to being champions of reasserting Kyrgyzstan’s sovereignty over its lands and assets, Japarov and Tashiyev are evincing clear discomfort at being politically outflanked.

Lawmaker Dastan Bekeshev has condemned the October 23 arrest as a clear sign of the national leadership’s paranoia and a sign that the country’s rulers are “sliding into authoritarianism.”

“Can you imagine that a few active citizens taking a position on the transfer of the Kempir-Abad reservoir could be preparing to seize power? This is fantasy and nonsense,” Bekeshev wrote.