Kyrgyzstan: Meskhetian Turks Cling to Traditions to Cope with Uncertainty 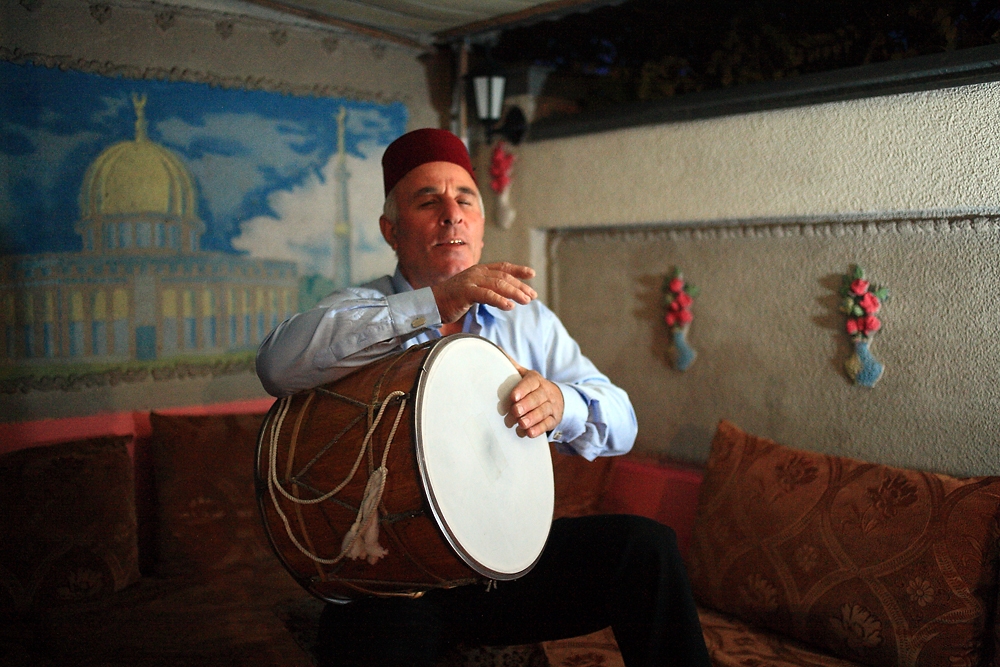 Farman Shakhbazov plays his davul double-headed drum at his house in Bishkek. 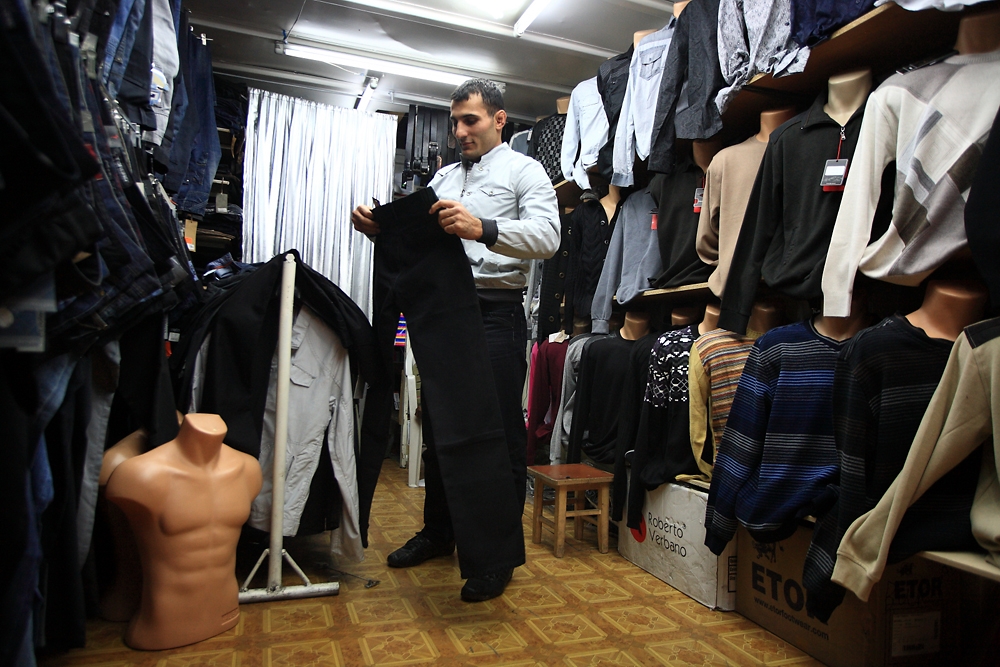 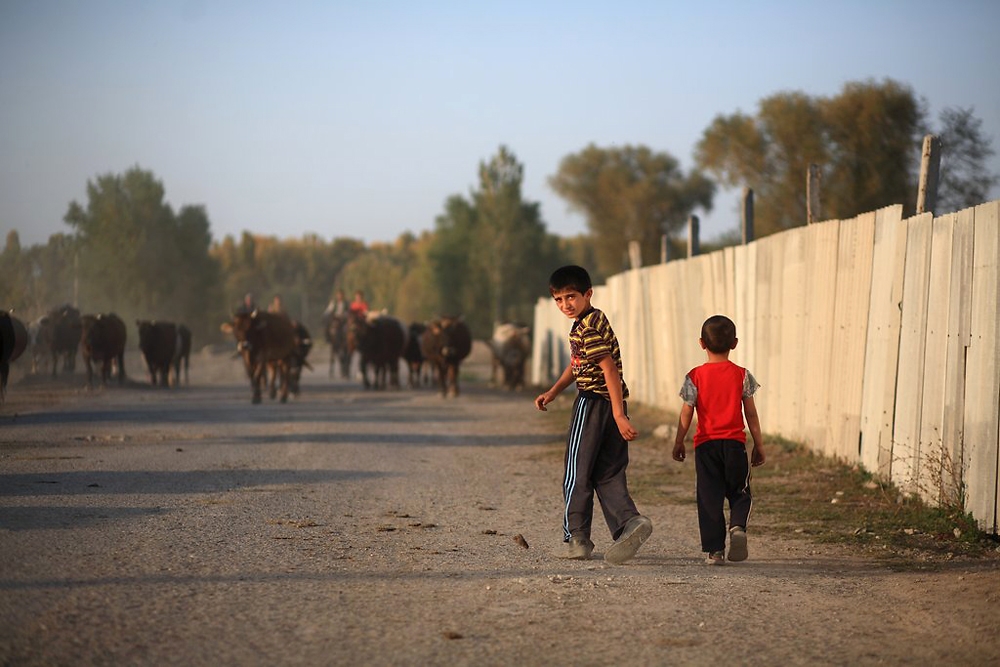 Meskhetian children play in Maevka, a village close to Bishkek that suffered from ethnic clashes in 2010. 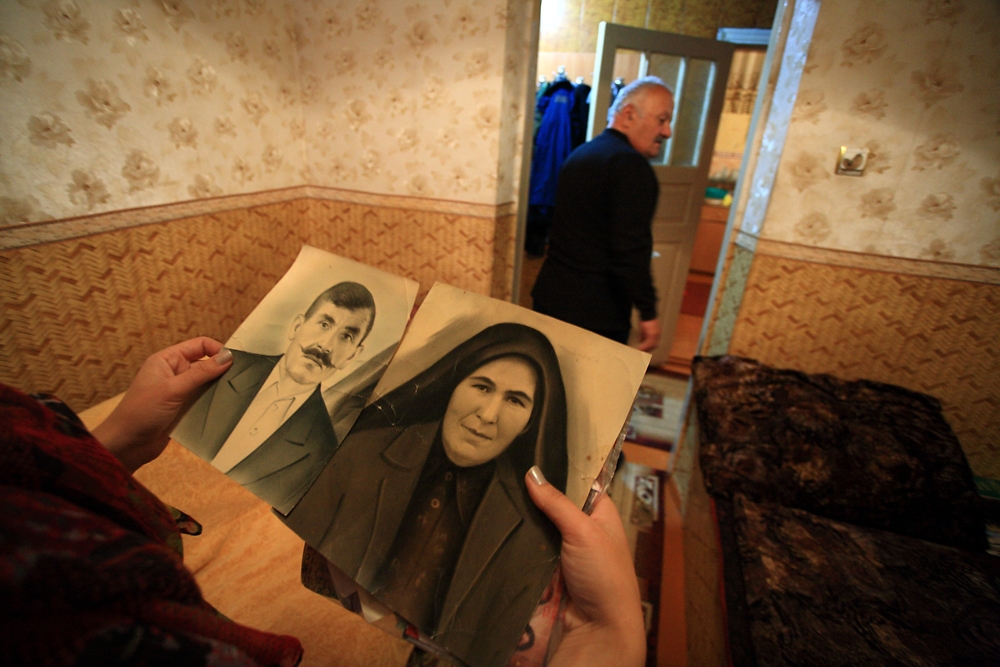 Emil Gamidov looks back at his daughter holding portraits of her grandparents, who were deported from Georgia. 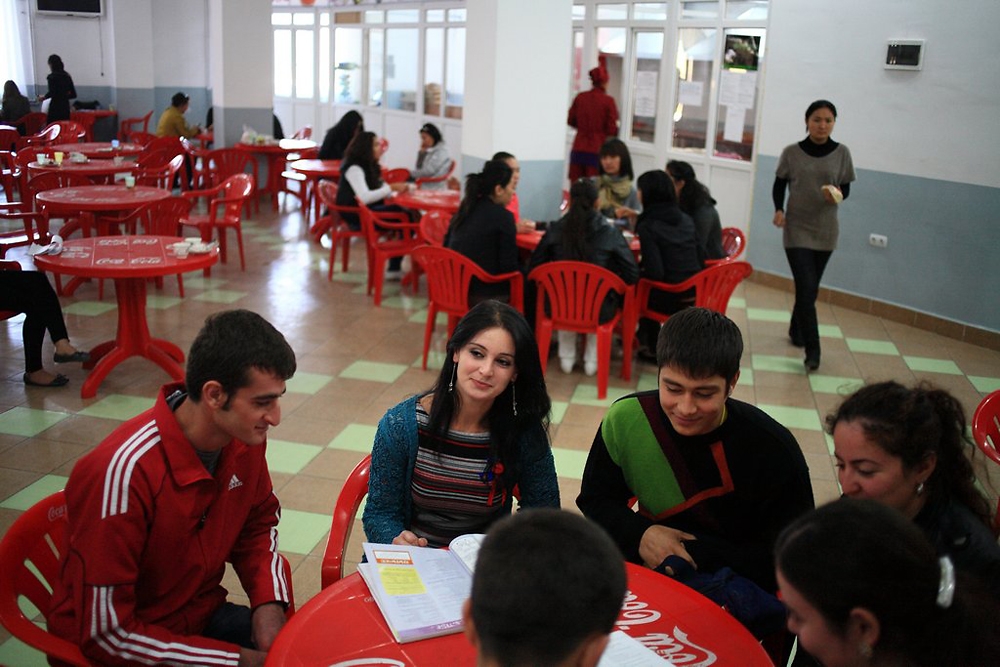 A group of Meskhetian students gather in the cafe of Ataturk Alatoo University in Bishkek. 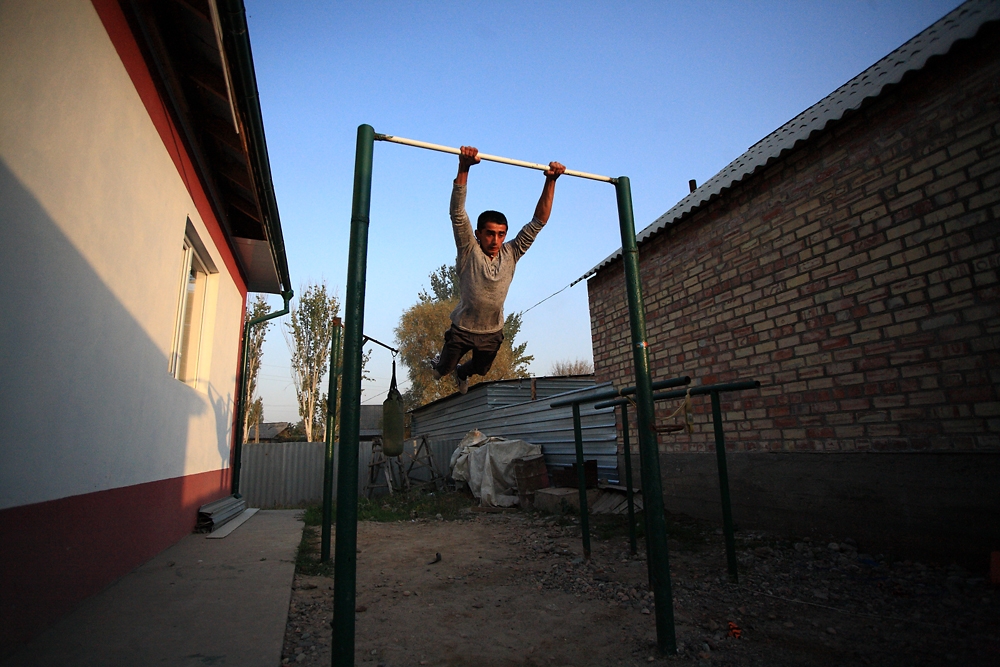 Agali Karipov, a son of Kaptan Karipov who died during the clashes in 2010, exercises in the yard of their house in Maevka. 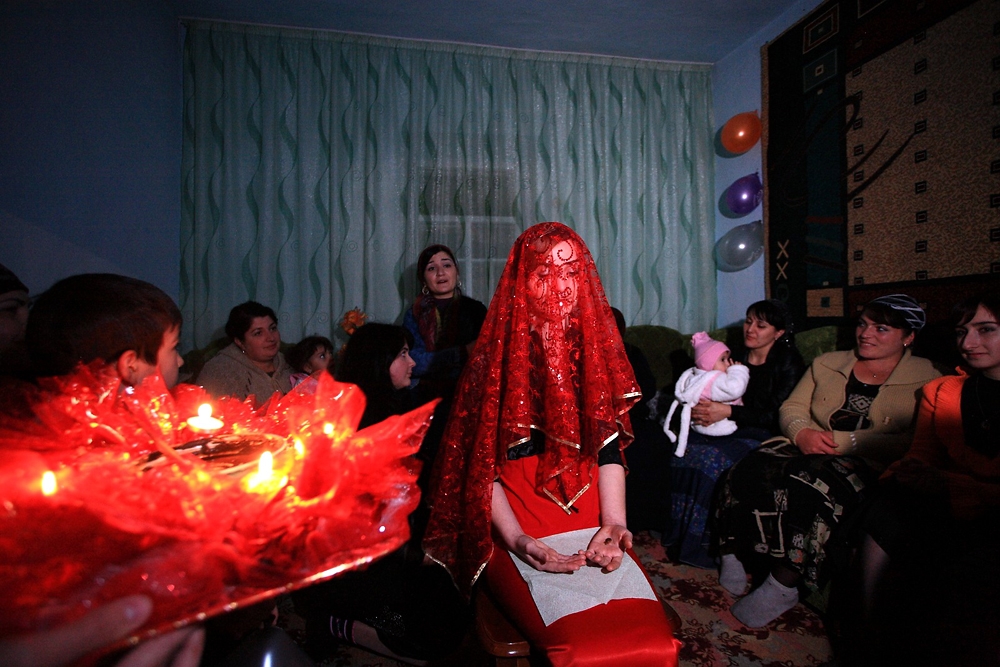 Bride-to-be Sevila Partova, 16, is preparing for the henna painting ceremony. 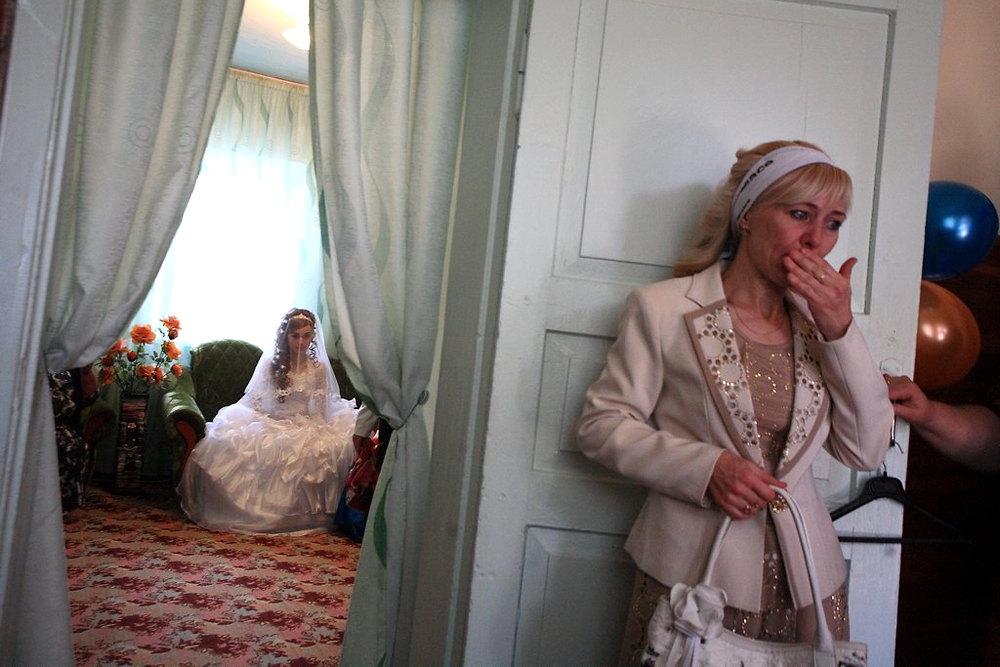 Ramzila Partova has tears in her eyes on the wedding day of her daughter Sevila. 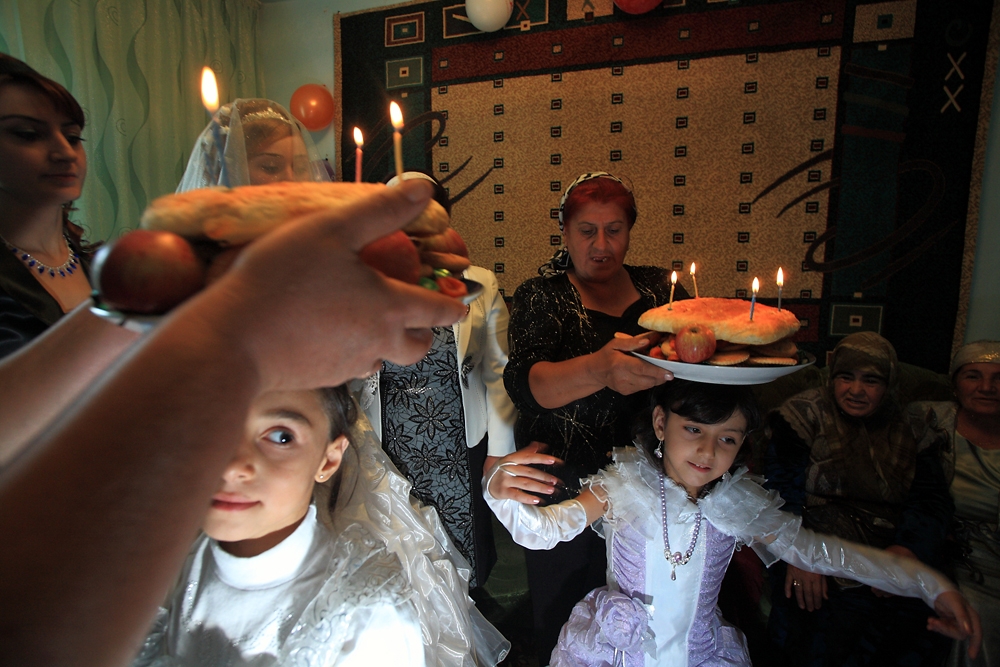 Two girls whirl under plates to make the newlyweds' life "brighter and productive and their home always full." 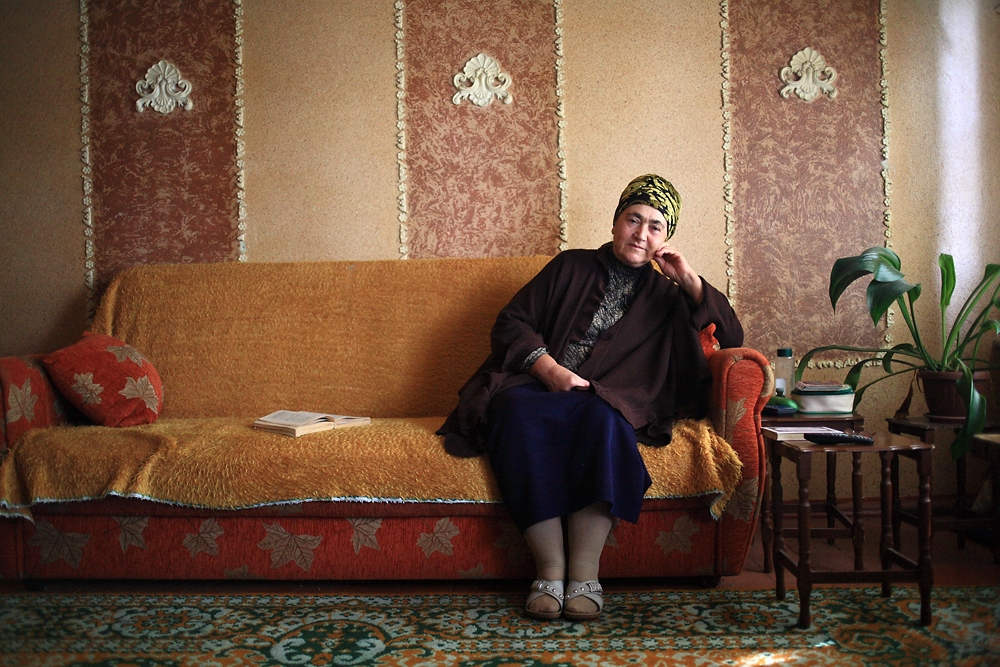 Gullar Kamalova, a poetess, was a few months old during the deportation from Georgia. 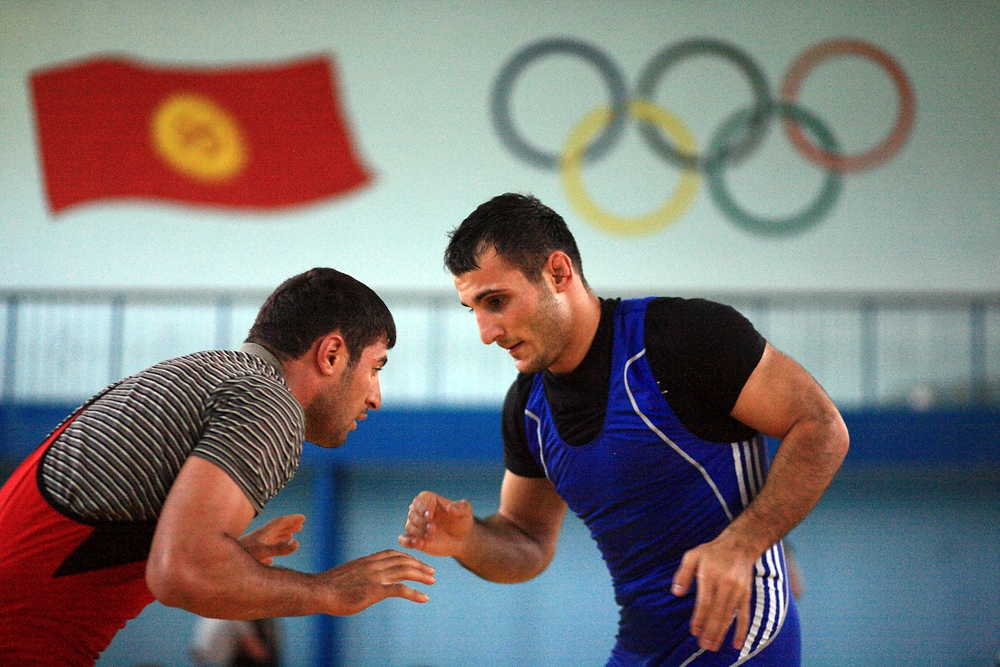 Hasan Hamdiev (right) spars with his team-mate Husniddin Yusupov during his wrestling class in Bishkek. 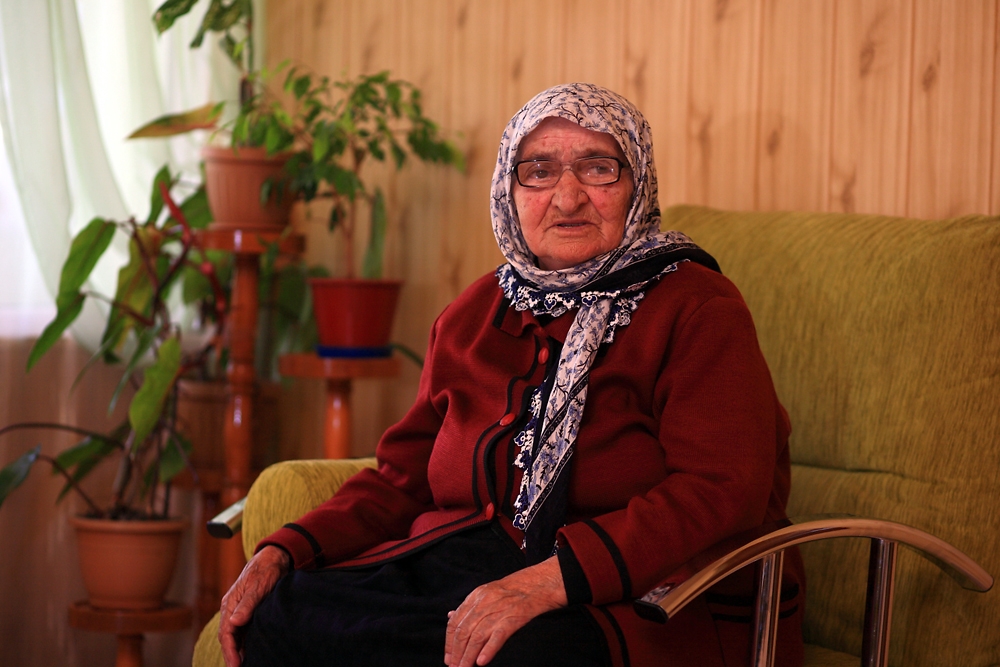 Muhabat Mamedova, 91, was 23 years old and newly married during the deportation. 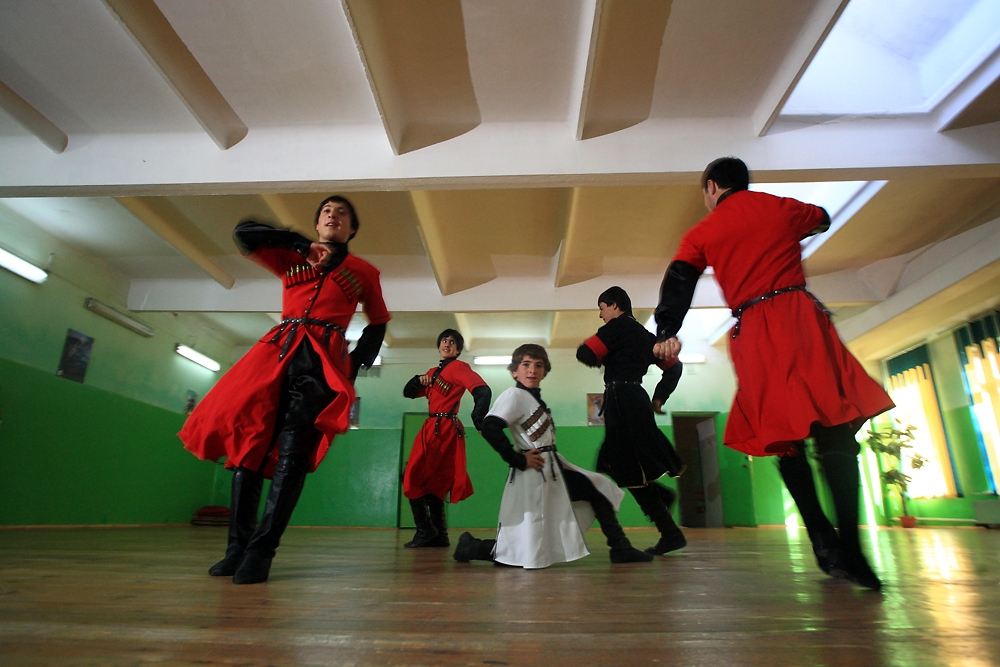 Meskhetian folk dance group Ahiska - the Turkish name for the Meskheti region - rehearse in a Bishkek school.
prev
next

In late fall of 1944, Muhabat Mamedova recalls, she got married and moved to her husband’s village in south-central Georgia. She planned to live her whole life there. Yet, within a few weeks, she had to leave the village, Zharali, forever.

Mamedova was among an estimated 80,000 to 100,000 Meskhetian Turks forcibly deported by Soviet authorities from the Caucasus to Central Asia. Meskhetian Turks weren’t the only nationality to suffer such fate: among other national groups sent into internal exile during the Second World War were Crimean Tatars, Volga Germans and Chechens. NKVD troops explained to Mamedova’s family that they were being evacuated in anticipation of a Nazi German attack.

In reality, Soviet authorities questioned the loyalty of the deported nationalities and moved them far away from the fighting to guard against the possibility that they could act as a Fifth Column. The boxcar that carried Mamedova, who is now 91 and living outside Bishkek, and her family to Central Asia was freezing; food was limited. Many died – their bodies thrown from the wagons onto the snowy steppes. After arriving in Kyrgyzstan, her group was so hungry that they boiled hay to make soup.

Besides the cold and hunger, Mamedova’s family also had to deal with local suspicions. “Somebody spread the word that cannibals were coming,” says Mamedova. “When we arrived, they were afraid of us, and we were afraid of them. But soon they saw that we were just normal people like them.”

Only after Soviet leader Joseph Stalin’s 1953 death were Meskhetians allowed to venture outside their designated areas. In 1954, Mamedova’s father, who had been deported from Georgia to Uzbekistan, found her. “It was so unexpected,” says Mamedova, who was pregnant at the time. “I had lost any hope of seeing him ever again.” The shock from meeting her father after 10 years caused her to miscarry, she says. “The child just stopped moving inside of me,” recalls Mamedova, who didn’t tell anyone and carried the dead fetus in her womb until her father left.

“Father asked why I was crying. I said, ‘Because you’ll leave again.’ It’s really shameful to reveal those private kind of things.”

For the most part, the Meskhetian Turks from Georgia coexisted peacefully with local Kyrgyz, Russians, and other ethnicities in Central Asia. But when the Soviet empire started to unravel in the late 1980s, nationalism began to erode the harmony. In 1989, Meskhetians suffered a pogrom in the Uzbek portion of the Ferghana Valley. Hundreds were killed or injured. Thousands fled to Turkey, Azerbaijan, and Russia. In 2004, a few thousand Meskhetians emigrated from Russia to the United States.

During those Ferghana pogroms, Firuza Partova’s brother was severely beaten. Her family fled to Kant, a town near Bishkek. “[The Uzbeks] were like relatives to us. But after those events, that ended suddenly,” Partova, now 47, recalls. “Even those Uzbeks who were close to us started talking to us grudgingly. We understood that life there would become impossible and decided to leave.”

For Partova, the hardships motivate her to maintain Meskhetian customs like intricate marriage rites. “Our elders have been keeping [these traditions] and we’ll continue to live according to them. They say that without past there’s no future,” she says. A year ago, Partova organized the wedding of her orphaned 16-year-old niece, Sevila. From matchmaking to courtship to the ceremony itself, Meskhetian weddings are a serious business and require detailed knowledge of customs.

“We asked many old people. Even though from childhood we grow up with our traditions, you can’t remember all details," Partova explains. "I would pay attention to them at all weddings that I attended. Because you never know when you’ll need them, right?” In Kyrgyzstan, the Meskhetians felt especially unwelcome in April 2010, when, during the political upheaval that followed the overthrow of Kurmanbek Bakiyev, some were targeted for their land and their relative prosperity.

During pogroms in Maevka, outside Bishkek, dozens of houses were burned and at least five Meskhetians died. One of the dead was Kaptan Karipov. Karipov’s widow, Kizhanim Karipova, recalls how a group of ethnic Kyrgyz gathered near the village, demanding land.

“My son-in-law ran home from the field and told us to leave the house urgently. He said that more than a thousand people were heading down here. I grabbed my sons and ran away,” Karipova says. She also called her husband, but he ignored her pleas to stay away from the village. “They caught my husband [next door]. They did all sorts of things to him. He was mutilated.”

The pogroms, which were followed by an uptick in Kyrgyz nationalism, prompted some Meskhetians to contemplate leaving Kyrgyzstan. With their Turkish language skills, many young Meskhetian men travel to Turkey to work. But 23-year-old Husniddin Yusupov says he prefers to stay in Bishkek, despite a dearth of jobs, rather than leave his community.

Yusupov sells imported Turkish clothes at Bishkek’s largest market, Dordoi. In the evenings he goes to a gym to practice Greco-Roman wrestling. “Those of us who go there [to Turkey] forget our traditions and just become Istanbul Turks,” he says. “I want to remain a Meskhetian Turk.”