Japarov has tried to put investors at their ease, but his government is sending mixed messages. 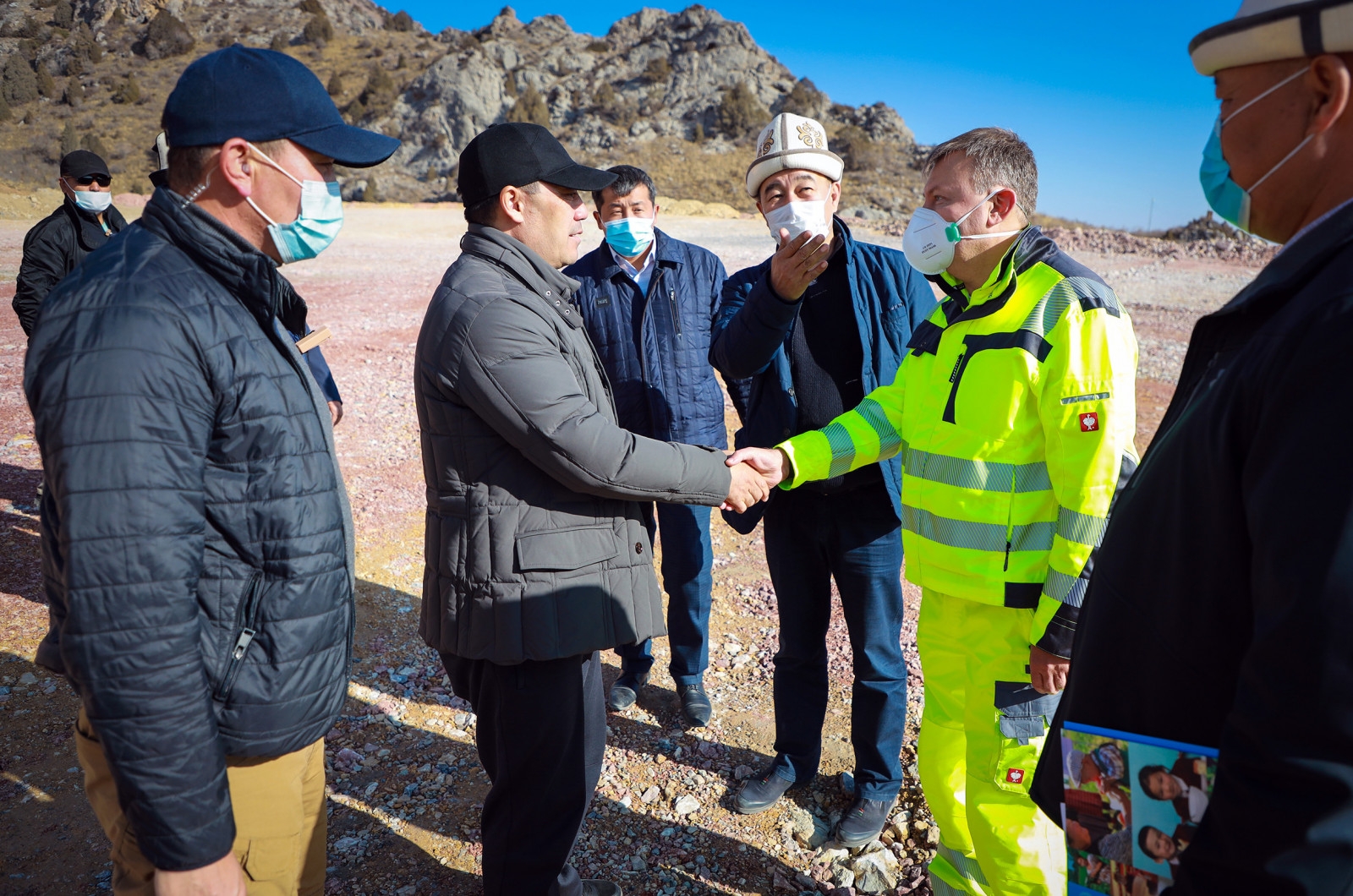 Japarov, center, shaking hands with a representative from the company developing the Bozymchak mine. (Photo: Government website)

Kyrgyzstan’s latest bout of political turbulence halted operations at a number of mining companies as mobs took advantage of the lawlessness to raid their projects.

The next risk the miners may be facing are regulatory as authorities mull tapping them for funds with which to close the yawning budget deficit.

For now the companies are still recovering from the mayhem that ensued following weeks of unrest that stemmed from protests against the October 4 parliamentary election.

A subsidiary of Russian Platinum, which operates the country’s second-largest gold mine, Jerooy, has claimed damages of $15 million – the result of an assault apparently mounted by residents of nearby villages on October 6.

The operator of Kyrgyzstan’s largest mine, Kumtor, was spared the kind of unrest that brought at least eight mines grinding to a halt.

But the general mood of uncertainty has seen the stock of its operator, Centerra Gold, tumble by 18 percent since the crisis began. The Kyrgyz government holds around 26 percent of the company’s shares.

It was mainly promising, second-tier mines, such as Jerooy in the northwestern region of Talas and the Ishtamberdi, Bozumchak and Terek-Sai mines in the southern Jalal-Abad region, that were targeted during the chaos.

Jerooy and Terek-Sai were both at critical stages in their project cycles. Jerooy was expected to enter production of gold this year, while Terek-Sai’s Turkish operators were building a plant to recover gold and silver from ore.

The International Business Council lobbying group said on November 3 that it estimates that the state is losing $50,000 for every day that the mines stand idle. It is as yet unclear if any of the mines have resumed operations.

There is also an awkward diplomatic angle to this situation. Ishtamberdi is Chinese-operated and Bozymchak is run by Kazakh copper giant Kazakhmys. Both countries are important partners for Kyrgyzstan.

The government says it wants to get the sector up and running as soon as possible. But the biography of the new prime minister and acting president, Sadyr Japarov, is not reassuring.

Japarov’s political brand is built to a major extent of nationalist appeals against miners like the one operating Kumtor.

He has softened his stance since taking power, though. On October 23, he pledged to defend investors after saying before that that he has no plans to seek ownership restructure of Kumtor.

At the same time, he has shied away from criticizing the crowds that attacked the mines last month.

Those incidents happened because of “a reluctance by companies to cooperate with the local population, as well as non-compliance with international requirements on environmental issues in the region,” Japarov said.

During a tour of the south this week, Japarov visited Bozymchak and Terek-Sai. He met with local officials, residents and company representatives.

At Terek-Sai, in which the government controls a 25 percent stake, Japarov called for the community to play a greater role overseeing the project’s social and environmental obligations.

As for Bozymchak, he asked nearby residents not to blame Kazakhmys for any shortcomings. All the blame lay with the previous government, he said, omitting to detail how his administration will tackle outstanding issues.

If Japarov has tried to sound a reassuring note, more worrying noises for miners are coming from regulators.

Jyrgalbek Sagynbayev, the newly appointed head of the state committee for subsoil use, said on November 2 that the government was working on new legislation to impose new requirements on miners.

One could see the companies obliged to ensure 90 percent of its employees are local hires, Sagynbayev said. Another would mandate that miners source more goods from Kyrgyz companies.

A mooted plan to proscribe the export of unprocessed ore would force companies to build in-country processing facilities. That requirement would imply a windfall of investment and generate many jobs, but it could also pose fresh environmental risks.

This regulation would impact Kazakhmys and some Chinese companies that take ore over their respective borders with Kyrgyzstan.

Ideas like these have been raised in the past only to be shot down for being impractical.

According to lawmaker Dastan Bekeshev, who claimed familiarity with legislation under development, what Sagynbayev has spoken about is just the tip of the iceberg. Government is seeking a permanent stake in all mining projects as well as undefined “historical payments,” he wrote in a November 3 tweet.

“We had better get the chains ready or else [the investors] might run away,” he joked.