Kyrgyzstan: Moscow Vexed by Bishkek’s Efforts to Play the Field 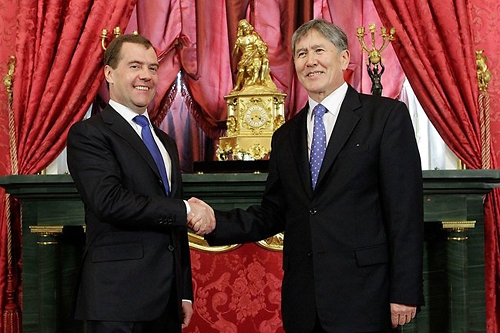 The Kremlin is getting cranky over Kyrgyzstan’s efforts to obtain aid without any diplomatic payback. To convey their displeasure, Russian officials are now delaying cooperation agreements and demanding an expanded share of a Kyrgyz military facility.

Russian analysts say than on visits to Moscow in February and March, President Almazbek Atambayev annoyed Russian leaders with persistent demands for economic assistance. What particularly vexed the Kremlin was that there was no “quid” to Atambayev’s “pro quo.” In return for aid, Russian leaders expect diplomatic fealty. Yet Bishkek remains attached to a “multi-vector foreign policy,” in which Bishkek fosters warm relations with all regional powers, rather than cozying up solely to Moscow.

From the start of his administration, Atambayev has demonstrated a willingness to diplomatically defy Moscow, even as he repeatedly bangs on the Kremlin’s gates, playing the role of supplicant. According to Alexey Malashenko, an expert at the Carnegie Moscow Center, Russian leaders have been displeased since December, when Atambayev invited a Kremlin bête noire, Georgian President Mikheil Saakashvili, to his inauguration in Bishkek. Upon seeing the guest list, Russia cancelled plans for a senior Kremlin official to attend and sent a junior official instead.

“Relations between Moscow and Bishkek have chilled. Atambayev’s visits to Moscow were a failure,” Malashenko said. “Not a single agreement was signed during those trips.”

In Bishkek, many analysts take a less dire view of the situation. But some pundits see parallels in the Kremlin’s current spat with Atambayev with the last time Moscow grew annoyed with a Kyrgyz president. In that case, back in 2009-10, former President Kurmanbek Bakiyev lasted just a few months in power after the Kremlin started to turn the screws.

Among policymakers in Bishkek there is frustration with what is perceived as Moscow’s repeated failure to fulfill promises.

After the Russian legislative elections in December, the Kyrgyz authorities expected a $160 million loan from Russia, which Moscow had promised through the Eurasian Economic Community (EEC). Moscow postponed the transfer, however, saying the matter would be reviewed in 2012. Atambayev’s visits earlier this year passed without the loan being finalized. Bishkek had counted on the money to supplement the state budget.

In addition, Russian officials appear to have delayed a deal that has already been 10 years in the making, in which Russia’s Gazprom is supposed to purchase a 75-percent stake in Kyrgyzstan’s state-run Kyrgyzgaz. Kyrgyz officials say the aging Kyrgyzgaz infrastructure is badly in need of repair, yet they don’t have other investors.

After his February meetings with Prime Minister Vladimir Putin and outgoing President Dmitry Medvedev, Atambayev talked tough, scandalizing observers in Moscow and Bishkek alike. “If Russia is willing to help us as our strategic partner, we will accept help. But today what we see is not help,” he told the Kommersant business daily on February 27. He added that a Russian airbase in Kyrgyzstan “only flatters the vanity of Russian generals. […] Why do we need this?” and declared Bishkek would no longer beg for aid.Though he was able to secure a “measly” $15 million for overdue Russian military base rent during the trip, Russian officials reproached him, saying Atambayev was confused about which bases the rent was for. The Kremlin also pointed out that Kyrgyzstan owes Russia $480 million.

The following month, during Atambayev’s trip to attend an EEC meeting, a Kremlin source announced Moscow was changing terms on yet another outstanding agreement.

In 2009, Moscow promised a $2.15-billion aid package including $150 million in cash, a $300 million low-interest loan, and $1.7 billion to help build the 1.9-gigawatt Kambarata-1 hydropower station on the Naryn River. In addition, in exchange for writing off $180 million in debt, Russia would receive 48 percent of Dastan, a torpedo factory in Bishkek. Former president Bakiyev, in turn, reportedly promised to evict the Americans from the Manas air base outside of Bishkek. After he received the cash (but not the investment or write-off), Bakiyev renegotiated with the Americans, allowing them to stay – a move that infuriated the Kremlin and, many argued, hastened his downfall.

The Kremlin now wants 75 percent of Dastan shares in exchange for the $180 million write-off. And Russian officials have said they will only participate in construction of the dam if Moscow gets 75 percent of those shares.

Russian analysts say the tougher bargaining underscores Moscow’s eroding sense of trust in Atambayev, who ran last year on a pro-Russian platform. “After Atambayev was elected president, he changed Kyrgyzstan’s foreign policy rhetoric, abandoning all his previous statements regarding Russia,” said Alexander Knyazev, an Almaty-based political scientist who is seen as close to the Kremlin. Moscow is weary of such “cheap bargaining.”

Though Atambayev has repeatedly described Russia as Kyrgyzstan’s most important ally, and has said the US airbase at Manas will close when its lease expires in 2014, he has not done enough to assuage Moscow’s concerns. “The ‘multi-vector’ period is over, it is time the Kyrgyz make unambiguous their priorities – they must go with Russia and Kazakhstan, or with Georgia and the United States and maybe China,” Knyazev said.

From Bishkek’s viewpoint, Kremlin concerns seem overblown. Many Kyrgyz see Russia as a natural ally; hundreds of thousands of Kyrgyz work in Russia and the countries share deep historical and cultural ties.

Temir Dzhumakadyrov, a political scientist from the Kyrgyz National University, attributed the toughening Russian stance to a desire by Putin to impress his domestic constituents as he prepares to reassume the presidency next month. “Regular discussions of projects including the Manas base, Kambarata and loans are only tools of influence,” Dzhumakadyrov said, adding that Bishkek is being pragmatic scouting out other investors.

“But a critical point is coming, when [Kyrgyzstan] must make a decision in this or that direction,” he added.