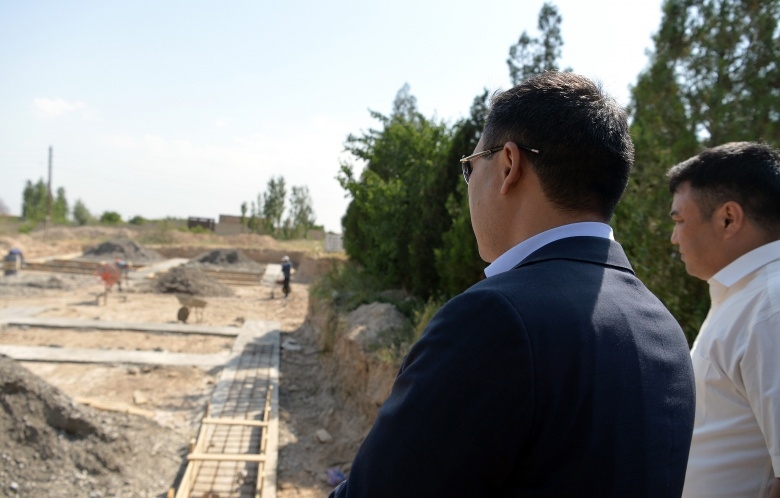 President Sadyr Japarov visiting the site of a new home under construction in the Batken region on May 28. (Photo: Presidential administration)

Lawmakers in Kyrgyzstan are going through the motions of adopting a bill that would give Batken, an economically depressed region that saw border clashes last month, special status and grant it job-promoting tax incentives.

MPs adopted the legislation in its first reading on May 28.

To enact their plans, the authorities intend to develop a social and economic development program that would be funded with money equivalent to 2 percent of the national budget. Using the most recent budget as a benchmark, that should come to around $168 million.

As of 2022, the burden of maintaining schools and cultural centers will be redirected to the national government, meaning the region will be granted greater resources for spending on other areas.

The development program will be implemented by the government and local authorities, and Agriculture Minister Askarbek Dzhanybekov will become a special representative for Batken. A dedicated coordination council will oversee the work.

The legislation offers scant details, however, on what exact tax benefits are going to be offered, or what kind of employment and enterprises lawmakers are hoping to see emerge in the region. Suggestions from MPs have included building a garrison town and offering investors land free of charge.

Deputy Economy and Finance Minister Daniyar Imanaliyev has said the government is contemplating giving some villages complete exemption from taxes.

This is not the first time that special status has been considered for Batken. The idea was floated in 2019 and received backing from MPs, but eventually went nowhere.

According to official figures, Batken is the poorest of Kyrgyzstan’s seven regions. Around 32 percent of residents live under the poverty line.

The region is also the most dependent of remittances from workers abroad. Around 30 percent of income is accounted for by salaries sent home by relatives. The National Statistics Committee estimates that if migrant remittances were factored out of the equation, the poverty rate might rise to higher than 50 percent.

Economic wellbeing is little aided by the fact that so much land on the border with Tajikistan remains subject to disagreement, and violent conflicts routinely erupt as a result. Around 450 kilometers of the 970 kilometers of border shared by the two countries remains unresolved, despite decades of attempts to bring the matter to a close. Perhaps the most serious incident occurred at the end of April, when fighting broke out over control of a critical piece of irrigation infrastructure.

At least 36 Kyrgyz nationals and 20 Tajik nationals are known to have been killed in fighting, which involved troops from both sides exchanging gun and mortar fire. Tens of thousands of Kyrgyz people were forced to flee and dozens of their homes and businesses were set alight.