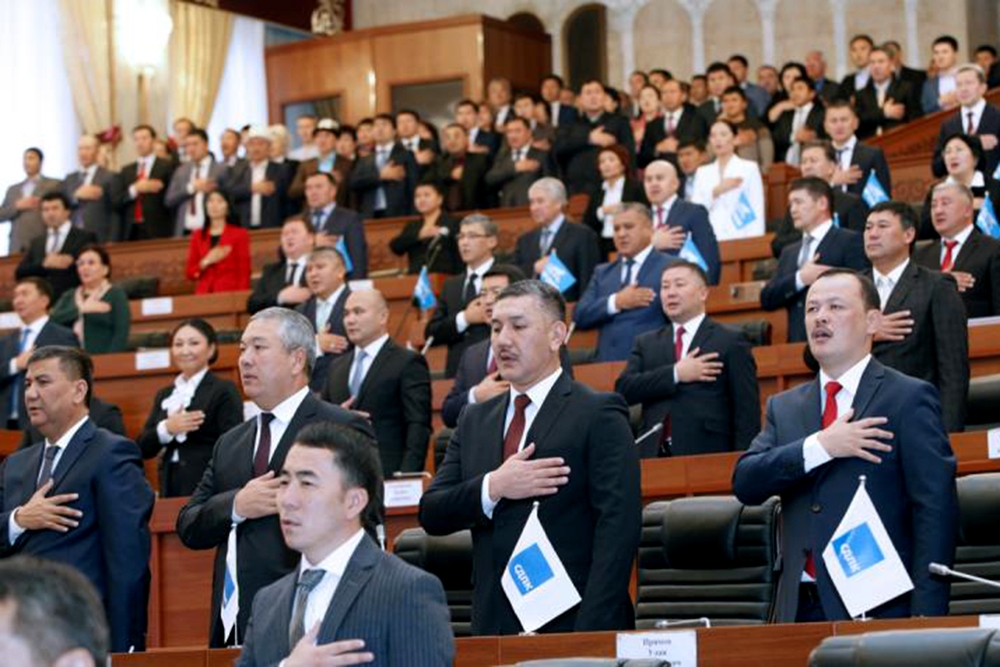 Kyrgyzstan’s newly elected parliament is sworn in to the Supreme Council in the capital Bishkek. Since the ceremony in late October 2015, several of the parliament members have given up their seats voluntarily or have been pushed out by legal proceedings and scandal. (Photo: Kyrgyzstan Supreme Council)

In the months following the cleanest elections ever held in Kyrgyzstan, several elected deputies suddenly lost their seats, and, in the process, revealed the shadowy horse-trading that passes for politics in Central Asia’s most lively parliament.

Some gave up their seats for a quieter or perhaps more lucrative life. Others were squeezed out in a fashion that will rekindle cynicism about the inner doings of political parties.

The parliamentary vote in October was meant to be a game-changer — a test of whether the country could hold a calm and fair contest at a time of peace. The vote in 2010 was held after the violent overthrow of a president, followed by the convulsion of ethnic unrest in southern Kyrgyzstan a few months later.

Fourteen parties competed for the 120 seats in parliament this time around.

Six parties made it into parliament. The Social Democratic Party of Kyrgyzstan (SDPK), a force identified with President Almazbek Atambayev, led the pack. The other parties that got in were opposition-minded Respublika-Ata Jurt; the pro-government Kyrgyzstan party; the southern-focused Onuguu-Progress; Bir Bol, a patchwork party formed by veteran officials from earlier presidential administrations; and the left-of-center Ata Meken party, a long-time fixture on the Kyrgyz political scene.

The smooth election drew plaudits from local and international observers alike. Atypically for the region, even the presidential SDPK only managed to garner 27 percent of the vote.

And then members of parliament started dropping like flies.

Before they could get down to work, 10 MPs abandoned their seats — some quietly, others forced out by legal proceedings and scandal. At least three deputies ditched parliament for their own reasons — odd timing considering how little time had passed since the election. In December, SDPK member Akylbek Sultanov resigned his mandate, ostensibly of his own volition, as did Bakyt Esenbaeva of Bir Bol in February.

The most striking departure was that of Ata Meken deputy Joomart Saparbayev, who became the country’s youngest legislator at the age of 25 after the elections in 2010. Saparbayev is credited with precipitating the resignation of then Prime Minister Omurbek Babanov in 2012 with his allegations of corrupt practices.

Despite being a leading figure in Ata Meken’s party list in the 2015 vote, Saparbayev shocked many by announcing that he was giving up politics to pursue business interests.

Another two MPs left to take up positions in government. Arzybek Kojoshev from the Kyrgyzstan party abandoned his seat to take up a job as Economy Minister. Fellow party member Kanatbek Muratbekov took the helm at the State Ecology and Technical Inspection Agency.

The biggest stink was caused in January, however, when the Central Election Commission stripped three MPs with the Kyrgyzstan party — Elmira Dzhumalieva, Cholpon Esenamanova and Urmat Ishenbekov — of their mandates.

Election officials explained that the expulsions were implemented at the request of party leader Kanatbek Isaev, who stated in a letter on December 21 that the trio had declared their intent to quit the Kyrgyzstan faction. Rules stipulate that MPs can lose their seats should they quit their party grouping.

Deputy Election Commission head Gulnara Dzhurabaeva told EurasiaNet.org earlier this month that she was still trying to clarify some issues around the purported resignations. “I did not see the originals myself. These were copies, and it was not even clear to whom the three letters were addressed; the name of the recipient was not given. The letters were typed out, while only the signatures were handwritten,” Dzhurabaeva said.

Except that at least one of the trio freely admits to signing the letter, although she argues that should not matter. Dzhumalieva said 160 candidates from her party signed pre-election resignation letters during a general meeting in a Bishkek restaurant two months before the vote.

“We signed a statement to say that we would give up our mandates if we don’t get enough votes. But there was no date on these letters, and since I was an MP in an earlier convocation, I stated that these letters had no legal effect”, she told RFE/RL’s Kyrgyz service, Radio Azattyk.

Cholpon Sultanbekova, another member of the Kyrgyzstan party, told EurasiaNet.org that the pre-emptive resignations were part of the deal to be considered for the running. “Those who do not get enough votes cannot be a member of parliament if there are no voters behind them,” Sultanbekova said. “The threshold
was not met by these [three] MPs.”

This kind of arrangement makes a mockery of Kyrgyzstan’s proportional system. Requiring candidates to deliver a certain number of votes from their home regions — typically around 5,000 apiece, according to cognoscenti of the scene — threatens in effect to create a majoritarian voting system by stealth.

Dzhumalieva has since accused Isaev of “turning [his] party into a business.” Isaev, meanwhile, stands by the validity of the resignation letters and suggests they be submitted for expert examination.

And there is nothing to say more resignations could not follow.

Political analyst Marat Kazakpayev told EurasiaNet.org that less powerful and influential MPs, which tend more often to be women, are typically the most vulnerable. And the concern is that corruption can come into play as parties seek replacements for deposed MPs.

None of this comes as any surprise to seasoned observers.

Political analyst Medet Tiulegenov said parties in Kyrgyzstan are best seen as short-term campaign machines which become active during the pre-election season but disintegrate as soon as parliament comes into session. “Four to five months have passed since the elections, and only now is the dust settling after these battles over who has a right to a seat,” he told EurasiaNet.org. “There are many ambitious actors and each one of them is trying to get something for themselves.”

Tiulegenov said it is the voters that lose out in the end. “People vote for parties, but in fact they are voting for a particular person from that party. But as we see, these people do not always end up staying [in parliament],” he said.