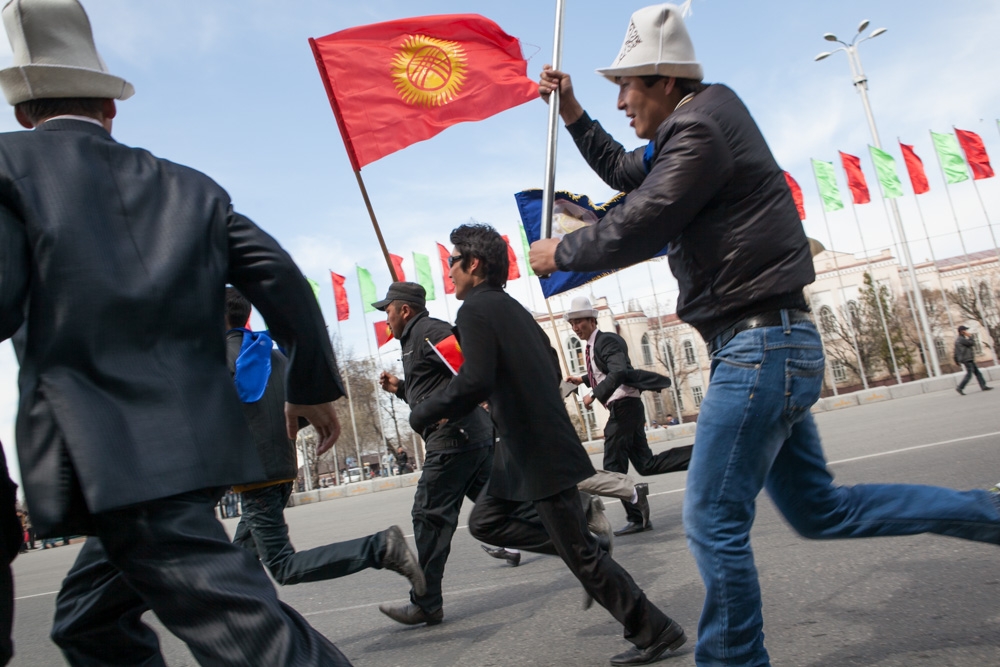 A group of men wearing felt kalpak hats raced into a karaoke club late one December night and lined up local women before a video camera. They accused them of prostitution while blaming Chinese men for abetting vice in Kyrgyzstan. Their video was meant to inflame public indignation.

Members of the group, called Kyrk Choro (Forty Knights), said they were acting with the support of Kyrgyzstan’s security agencies—a claim that has proven partially true and has prompted concern about why the law enforcement agencies would empower nationalist vigilantes. But while the xenophobia exhibited by group members makes some liberals uneasy, Kyrk Choro has managed to tap into public anger at the widely hated police.

Explaining how Kyrk Choro has gained popular support, Baktybek Nuraly uulu, a leader of the movement, waved a piece of paper that was seized during the group’s raid on December 28, at the X.O. club in northeastern Bishkek. “Here, at the very bottom of the receipt, there is a girl listed as an item,” he said. “They [young women] are being sold as goods there.”

“People compare us to [the far-right] Pravy Sektor in Ukraine, to Nazis and nationalists,” Nuraly uulu added. “Our goal is to raise the young generation as patriots, to protect Kyrgyz values, our culture and language.”

Claiming to be followers of Manas, the legendary Kyrgyz epic hero, members say that Kyrk Choro numbers 5,000. It is one of several nationalist movements to gain prominence since ethnic violence in 2010 between Kyrgyz and Uzbeks divided the small, impoverished country.

There’s a reason some have called Kyrk Choro fascist: In late January, the head of the group, Zamirbek Kochorbaev, publicly called for minority ethnic Uighur vendors to be booted out of Bishkek’s most popular clothing bazaar and replaced by ethnic Kyrgyz.

But it is allegations that the group operates with tacit government support that has most troubled legal experts in Bishkek.

After Kyrk Choro targeted another club on January 23, GKNB representatives admitted that the agency signed a memorandum with Kyrk Choro in 2012 on combating corruption. However, the GKNB insists, the document does not give Kyrk Choro authority to inspect or raid clubs.

After an Interior Ministry spokesperson denied supporting the group, the head of the Interior Ministry’s Criminal Investigation Office, Salamat Adylov, admitted to state media that the nationalist group had informed police ahead of its raids. Adylov says he warned Kyrk Choro activists that such raids were illegal, and on February 4, police opened a criminal investigation. If convicted, the men from Kyrk Choro could face up to five years’ in prison.

Nuraly uulu from Kyrk Choro says his group at times acts alone because, he alleges, police are protecting several clubs that serve as brothels. “In one of the clubs we found a police officer, his name is Dastan. What was he doing there? If we know that an officer of [the local police precinct] is protecting the place, why should we warn him [about the upcoming raid]? Are they insane?” Nuraly uulu said.

Lawyer Adilet Azimov from Bishkek’s Precedent Partner Group says Kyrk Choro raids violate both the rights of the clubs’ owners, and the clients’ rights to privacy. “Though they claim they want to protect the women working there, Kyrk Choro is violating their rights by filming them, defaming the girls’ honor and dignity, accusing them of prostitution,” Azimov told EurasiaNet.org. Prostitution is not a crime in Kyrgyzstan, though running a brothel is.

“Public movements do not have law-enforcement functions, so they cannot carry out law-enforcement actions—searches, interrogations, lining people up against the wall as they did. They could monitor and inform the police, who can then come perform an official inspection,” Azimov explained, adding that Kyrk Choro’s members misinterpreted whatever agreement they had signed with authorities.

Bishkek-based human rights activist Nurbek Toktakunov, well-known for his criticism of the police, called the extrajudicial raids an “outrage” on his blog. But he conceded that the group has the support of people who are tired of corrupt cops and a lack of rule of law.

“They [Kyrk Choro members] might have good intentions, but they chose the wrong methods. It is a public organization, not a law enforcement body,” said political analyst Marat Kazakpaev.

It seems little can deter Kyrk Choro’s activists, who speak with passion about their self-appointed task. Shortly after parliament amended the Criminal Code in January to allow Kyrgyzstanis to use firearms to protect their property, Nuraly uulu told EurasiaNet.org that he is ready to die for his cause: “Even if they kill me, it would be an honor. I think what I am doing is for the future of my children and the people,” he said.