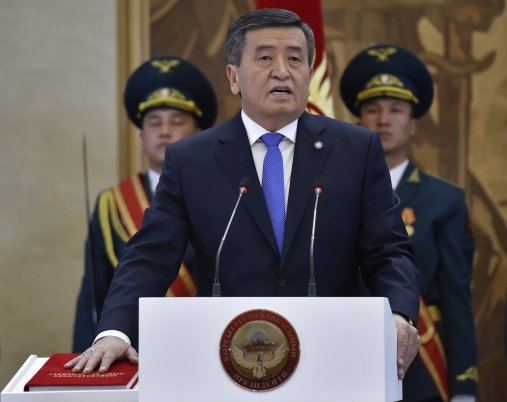 Sooronbai Jeenbekov swearing the oath of office during the presidential inauguration ceremony at the Ala-Archa residence in Bishkek on November 24, 2017. (Photo: Kyrgyzstan Presidential Press Service).

Kyrgyzstan has a new president. And this time it is not because the country has been roiled by revolution.

Sooronbai Jeenbekov, 59, was formally sworn into office on November 24 at the presidential Ala-Archa residence, formally bringing a close to Almazbek Atambayev’s tenure. It is the first time in the country’s history that one elected president hands the reins of power over to another leader chosen by plebiscite.

In his inauguration speech, Jeenbekov pledged that he would fight corruption and continue the policies advanced by his predecessor.

“The country cannot develop until the authorities are transparent. An untrammeled fight against corruption has begun and all conditions are in place for the sanitizing of society. The people have begun to place great faith in the authorities, because sooner or later, a thief must be put in jail,” he said.

Atambayev in turn wished Jeenbekov a contended time in power and summed up his presidency.

“I did not achieve a lot of what I had planned. And I was only really allowed to worked in peace in the most recent years, so forgive me if I did not live up to some people’s expectations. I tried to be honest with the people, with God and with my conscience,” he said.

Jeenbekov’s first act in office was to bestow Atambayev with the Ak-Shumkar Order, the country’s highest state award.

The new president, a former schoolteacher, is a long-time ally of Atambayev and was implicitly backed by the outgoing leader throughout the election campaign that ushered him into office. Jeenbekov served as a member of parliament for three terms and subsequently occupied posts as Agriculture Minister and regional governor in his native Osh region. He was nominated to run for president by the ruling Social Democratic Party, which was founded by Atambayev. Before stepping down to run for office, he served as prime minister — a role he fulfilled from April 2016.

Against expectations, Jeenbekov won the October election in a single round with almost 55 percent of the vote. Independent observers have, however, noted that the election was tainted by the use of state resources to favor Jeenbekov’s chances. His main rival, multimillionaire Omurbek Babanov, secured 33.5 percent of the ballots cast.

Jeenbekov’s first task in office will be to address a bitter ongoing diplomatic row with Kazakhstan. Atambayev torpedoed relations repeatedly in the run-up to last month’s election, accusing Kazakhstan of seeking to interfere in Kyrgyzstan’s political scene by allegedly backing Babanov. Since then, Kazakhstan has imposed intense, time-consuming checks on cross-border traffic, causing significant inconvenience to exporters, as well as to regular members of the public.

Earlier this month, the International Monetary Fund announced it was revising projected economic growth for Kyrgyzstan in 2017 down to 3.2 percent from 3.5 percent previously. It said the revision was prompted by the slump in trade caused by the row.