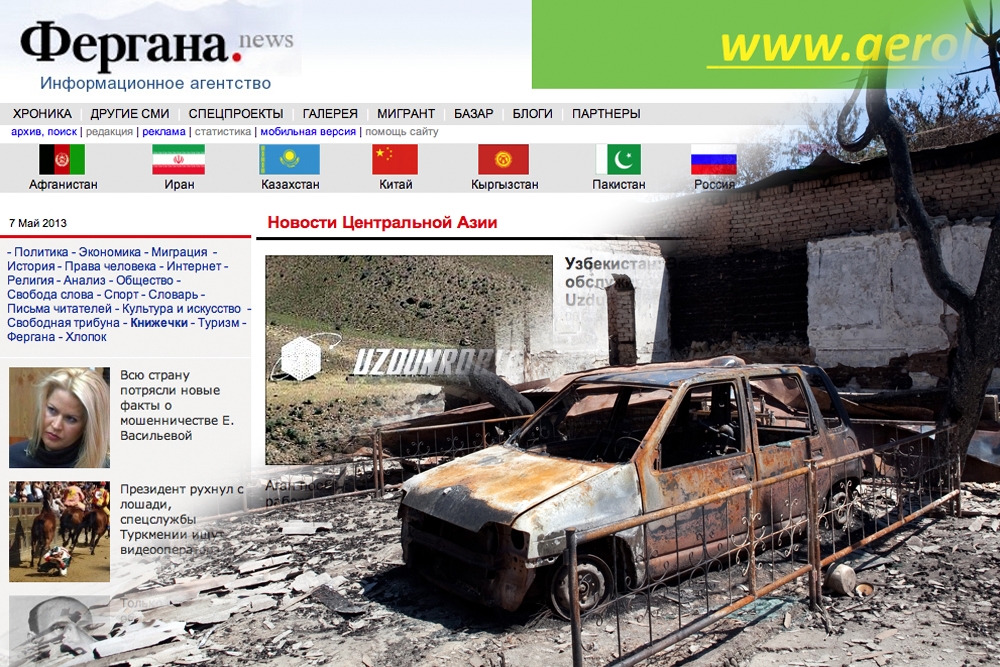 This photo montage depicts the web site fergananews.com and an image from the 2010 ethnic violence in Osh. (Photo: David Trilling; Screen shot of fergananews.com)

An authoritative Central Asia-focused news website has defeated attempts to silence it in Kyrgyzstan: authorities have unblocked it. Yet under the prevailing interpretation of a parliamentary resolution, the website, Fergana News, still appears to be banned in the Central Asian nation.

The nationalist-leaning parliament voted unanimously to block Fergana News (Fergananews.com, formerly Ferghana.ru) back in June 2011 after some MPs expressed dissatisfaction with the website’s critical coverage of the interethnic violence in southern Kyrgyzstan the previous summer. Though lawyers for several respected civil society organizations argued that only a court could order a website blocked, the State Communications Agency bowed to parliamentary pressure and ordered Internet service providers to block access to the site in February 2012.

In November 2012, Fergana News began legal proceedings in a Bishkek court to get the ban lifted.

For five months, Fergana tried to fight its case in court, arguing that the Communications Agency should not have followed the dubious order in the first place. But the proceedings were regularly delayed when officials failed to show and became bogged down in Byzantine legal maneuvering. For example, when Internet service providers supported Fergana’s case, the judge blamed them for following what they called an illegal order, though they risked losing their operating licenses if they did not comply. Eventually, the judge said a statute of limitations had expired – that by waiting nine months to sue the government, Fergana had missed its chance – and threw out the case.

But Fergana’s persistence, and the embarrassment the trial caused the government, appeared to succeed: in early April, Bishkek backed down. All local Internet service providers, including state-owned Kyrgyz Telecom, opened access to the site following a letter from the State Communications Agency on April 5.

Dunja Mijatovic, the OSCE Representative on Freedom of the Media, called the lifting of the blockade “a positive sign for Internet freedom in Kyrgyzstan” and emphasized that “by giving readers access to the site again, Kyrgyzstan has honored its constitutional values prohibiting censorship.” Mijatovic had previously slammed the ban. The watchdog group Reporters Without Borders had called the blockade “a major step backwards” for Kyrgyzstan.

Yet despite the success getting the block lifted, Fergana News is still trying to get parliament’s resolution overturned, and is wondering what legal force it contains: Could the block be implemented again at any time, representative of the news website wonder.

Fergana’s lawyers submitted an appeal to the Bishkek city court on April 5 to protest the lower court’s decision to throw out the original case. Thus far, the agency has not received a response, according to Daniil Kislov, editor of Fergana News. “We believe Parliament’s decision about our website was illegal as there was no court decision,” Kislov told EurasiaNet.org. “We’ve submitted an appeal as we believe that somebody should bear responsibility for illegally blocking access to our website for over 12 months.”

Officials at the State Communications Agency say they were just obeying a legislative directive. “We had to comply with this decision, so we sent the decree for execution to Internet providers, and they followed it,” Olga Serova, a senior lawyer at the State Communication Agency, told EurasiaNet.org. “The Agency did not make any order or decision in this regard. We notified the providers that there was a parliamentary resolution, which must be executed. That's all."

There is still confusion about the legal weight of a parliamentary resolution. “The blockage took place without a court decision on the basis of a request from the State [Communications] Agency. Internet service providers believed that it was inadvisable to escalate the situation into conflict with the government [by disobeying the request],” Aibek Bakanov, the executive director of the Association of Telecom Operators, a lobbying group, explained to EurasiaNet.org. “Now that the block is removed, the most important thing for us is that in the future any request from the government about blocking [Internet] sites is confirmed by a court decision.”

Journalists say blocking websites is ineffective as Internet users can easily enough gain access to blocked sites through proxy servers. Fergana News editor Kislov says the number of visitors from Kyrgyzstan increased by about 5 percent after the website became accessible again in Kyrgyzstan. During the ban, he said, most readers simply used proxy servers.

Press freedom advocates are pressing for closure in the case, specifically by seeking a determination on the legality of the original parliamentary resolution confirming that the legislature lacks the authority to act in such cases without a court order. Marat Tokoev, chairperson of Journalists, a Bishkek-based media watchdog, cheers the unblocking of Fergana News, but fears that parliament still does not understand its legal limitations.