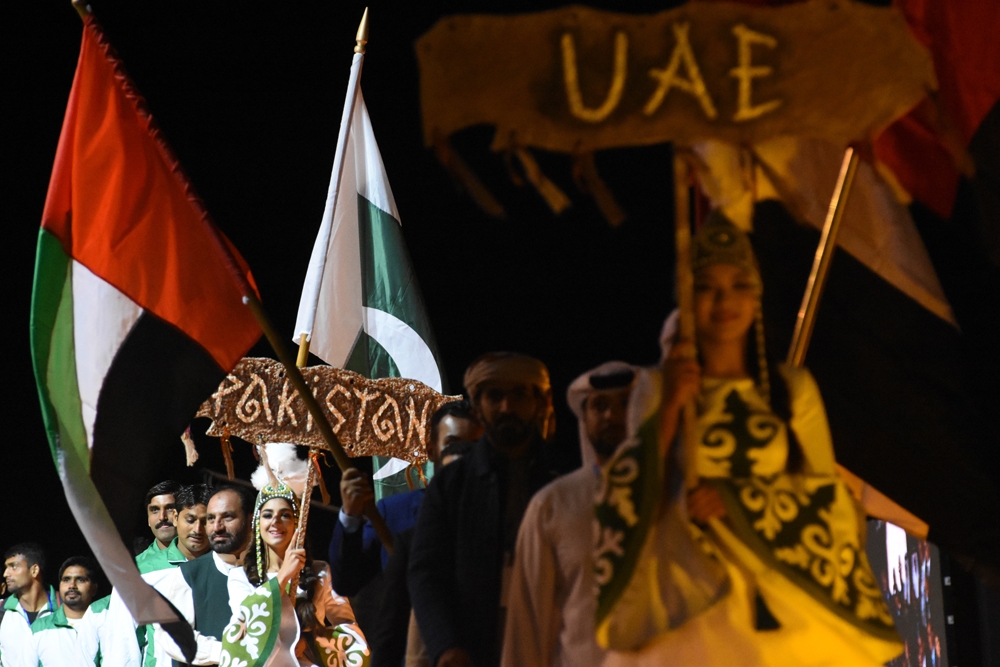 About 40 countries sent delegations to the World Nomad Games. 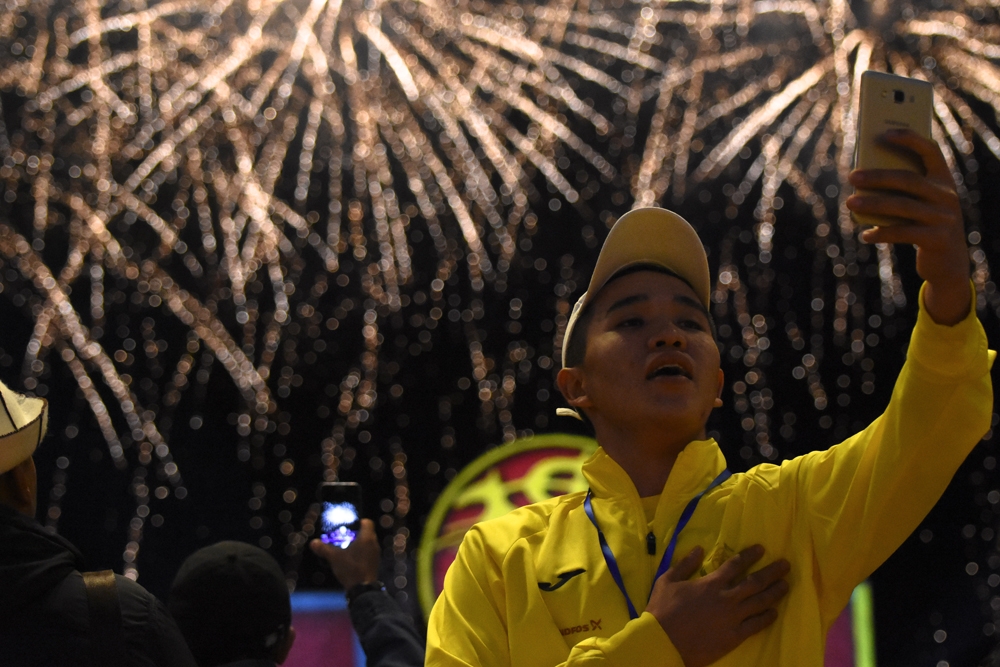 A volunteer taking a selfie during the fireworks finale that accompanied the national anthem at the end of the opening ceremony. 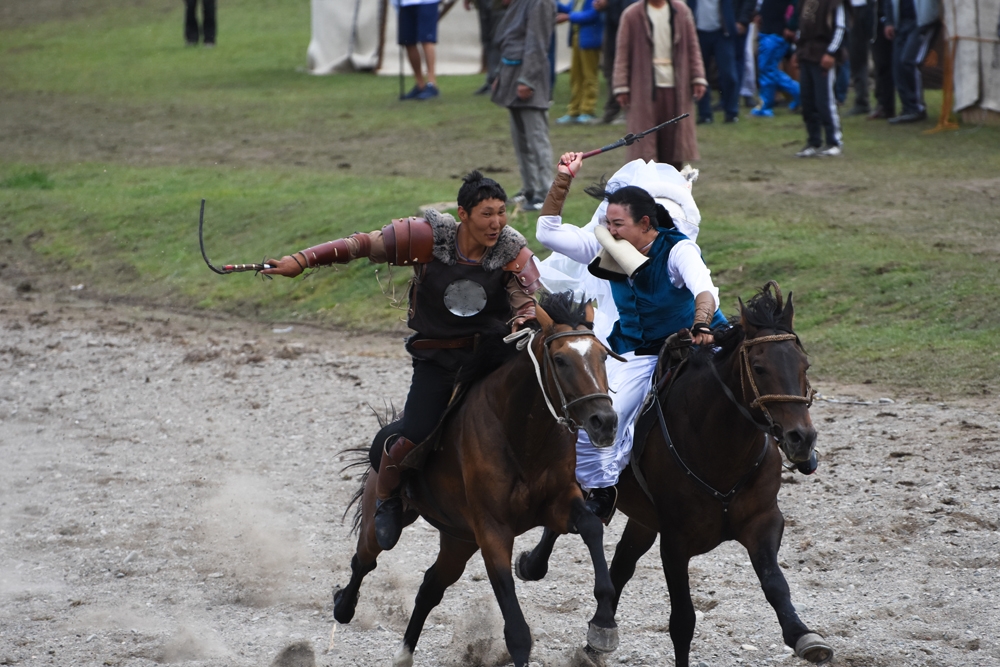 Actors demonstrating the game of Kyz-kumay, where a rider who fails to kiss a girl mid-gallop is whipped on the way back. 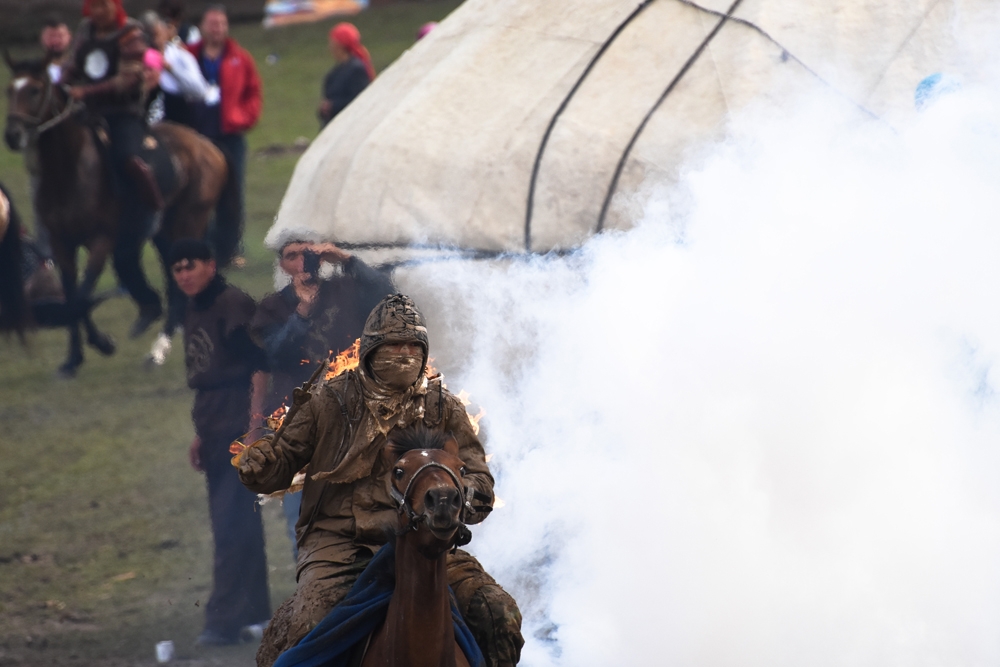 One of the dozens of Kyrgyz stuntmen, performing the flaming rider stunt during legend reenactments. 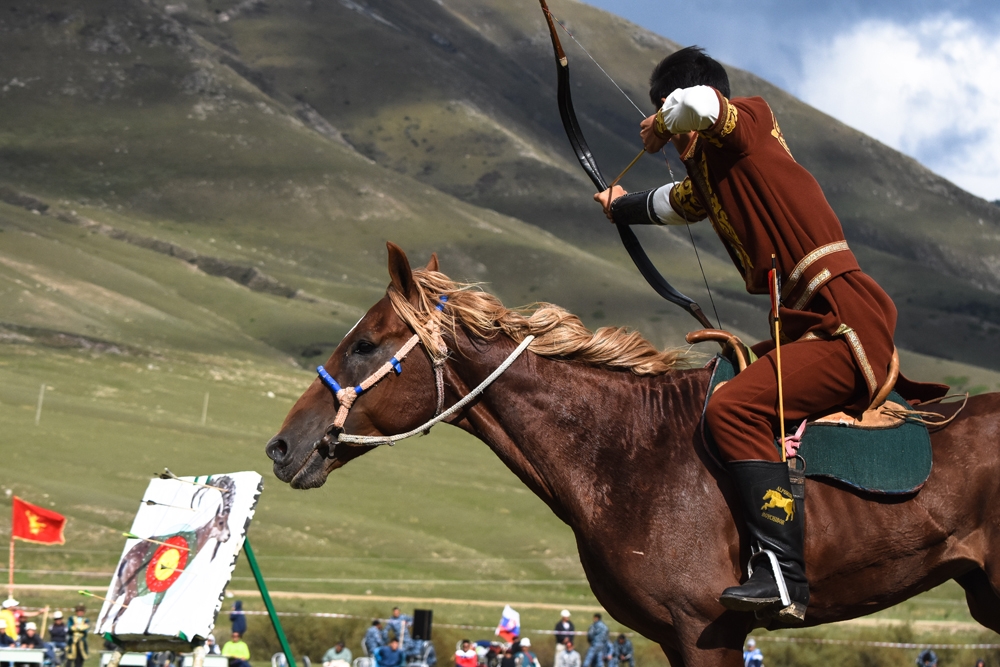 A competitor in Atchan jaa atuu, a traditional form of archery. 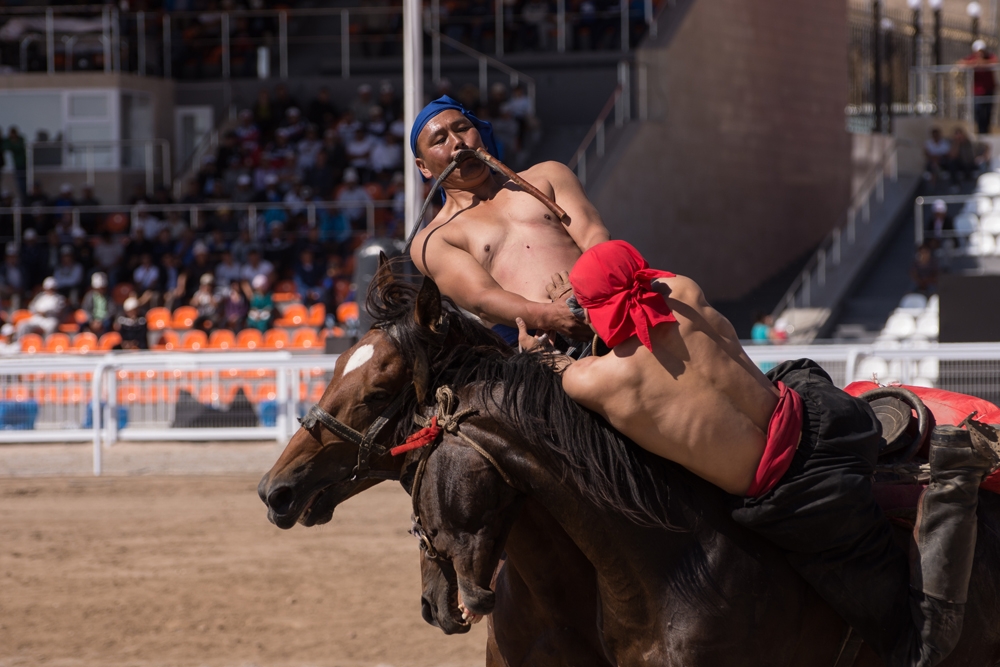 Two competitors in the final day of the Er enish competition, a traditional Kyrgyz form of wrestling on horseback. 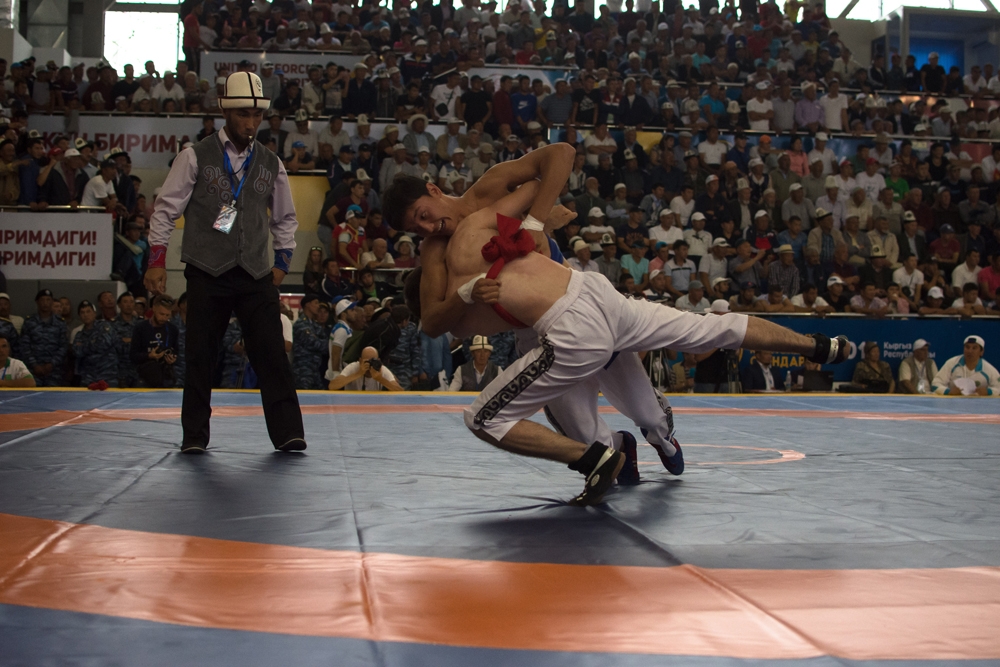 A traditional wrestling competition at the sports arena. 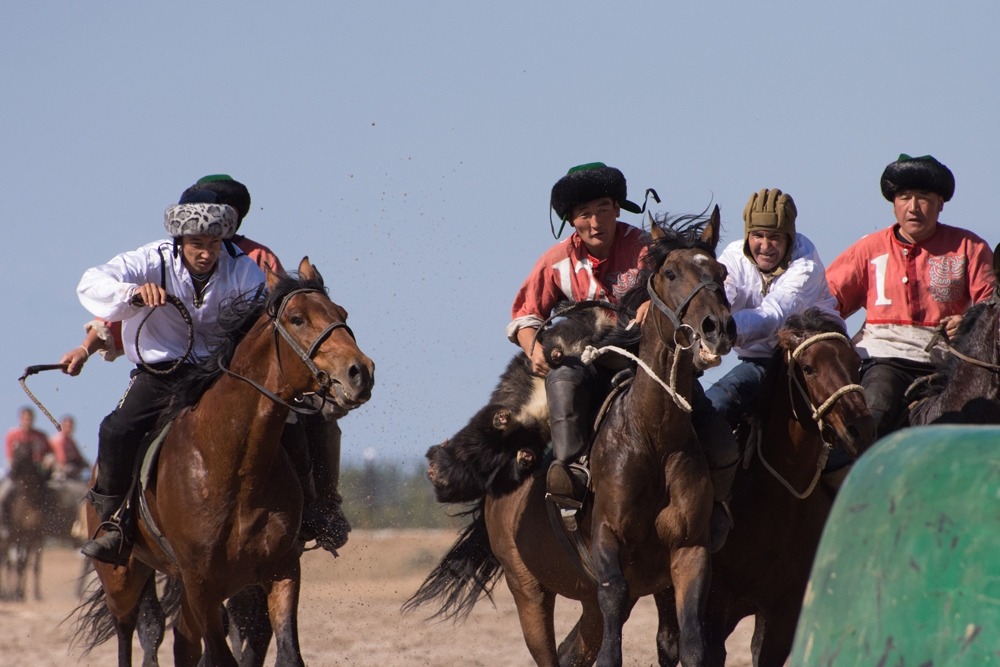 A match of Kok-Boru (aka Buzkashi, literally “goat grabbing”) between China and Russia. 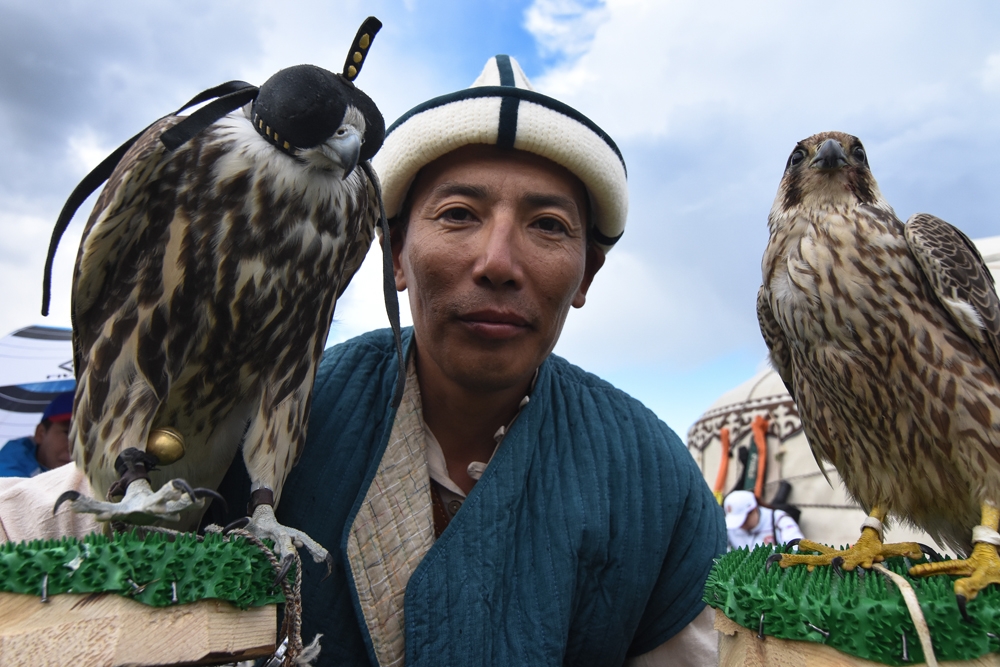 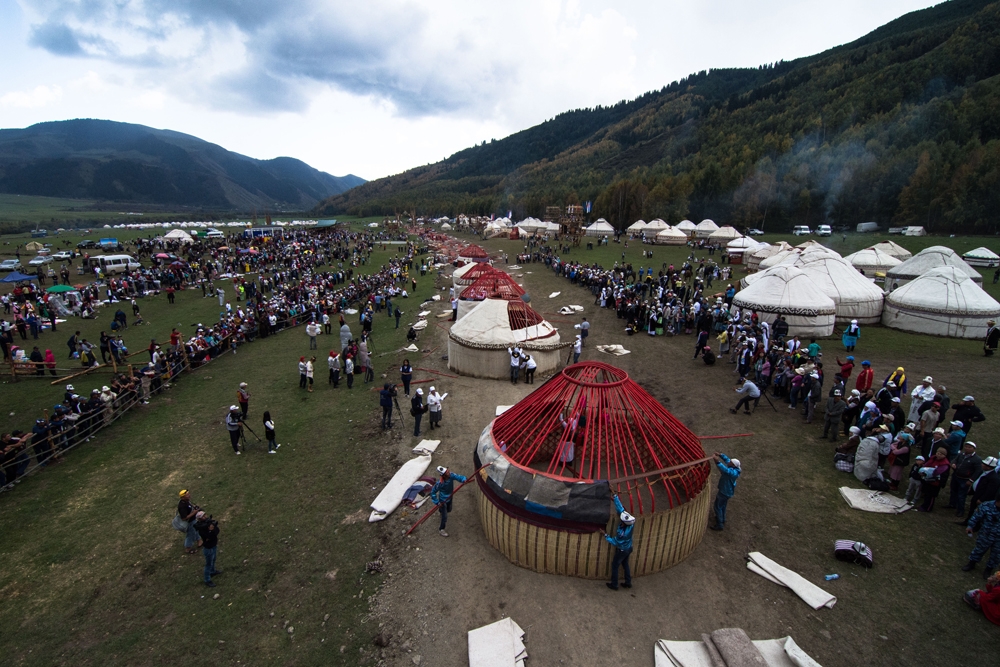 A yurt-building race. Traditional yurts (aka gers) have been used as dwellings by nomads across the Asian steppes.
prev
next

Imagine if the Olympic Games were held in Genghis Khan’s day – with fields full of galloping archers, competitive birds of prey, horse races and wrestling, and of course, horsemen clashing over a goat carcass. Now add selfie sticks and shuttle buses – and you’ve got what the World Nomad Games were like.

The second convening of the World Nomad Games – a home-brewed mix of athletic prowess and national pageantry – concluded in Kyrgyzstan on September 8. Staged around the country’s main resort area – Lake Issyk Kul – the five-day event was designed to celebrate nomadic ways of life, and featured over 1,200 athletes and hundreds of actors in costume. As such, the games were part athletic extravaganza, part tourism spectacle.

Organizers are hoping the games catch on, and can gain more legitimacy as an international sporting event. The first nomad games, held in Kyrgyzstan in 2014, were seen by many as a gimmick, in part because they suffered from poor organization.

For the second installment of the games, organizers expanded the number of sports from 10 to 23, and attracted a much larger number of competitors than were present for the 2014 event. Even so, many of the participants from Russia and China appeared to be of ethnic Kyrgyz origins.

The opening ceremony featured a blockbuster retelling of the history of the Kyrgyz people. The packed house at the 10,000-seat stadium roared at the sight of stuntmen riding on fire and a thousand musicians playing the komuz, a stringed-instrument that is a cultural symbol of Kyrgyzstan. The crowd also cheered the guest of honor – the American actor Steven Seagal, who has gained notoriety in recent years for hanging out with various authoritarian-minded Eurasian leaders, including Russia’s Vladimir Putin, Chechnya’s Ramzan Kadyrov and Belarus’ Alexandr Lukashenko. At the nomad games, Seagal led the parade of nations, entering the stadium on horseback wearing faux armor, while his mien was absolutely expressionless.

The sporting events themselves seemed to draw enthusiastic crowds. The traditional wrestling competition at the sports arena was completely packed, with viewers overflowing into stairwells and climbing on ledges. The centerpiece event was Kok-boru, a contest in which two teams of horsemen battle to carry a decapitated, stuffed goat carcass into the opposing squad’s end zone. The championship contest featured teams from Kazakhstan and Kyrgyzstan and generated lots of excitement. “It’s good to win,” said a taxi driver from the capital, Bishkek, as he drove home from the games.

Besides the kitsch and competition, geopolitical symbols were on clear display. Gazprom, a major sponsor, has its logo emblazoned on the sports arena, and Gazprom’s CEO, Alexey Miller, attended the event.

Organizers said the ultimate sign of legitimacy for the World Nomad Games would be a new host for the games’ next installment, scheduled to occur in 2018. Organizers had indicated they hoped to make an announcement following the closing ceremonies about the site of the next games. But so far no announcement about the 2018 host site has been made.

Vladic Ravich is a freelance photojournalist.