Kyrgyzstan: Notorious ex-customs chief’s region complains of too much money

The Kara-Suu district chief claims he has begged to be sent less money. 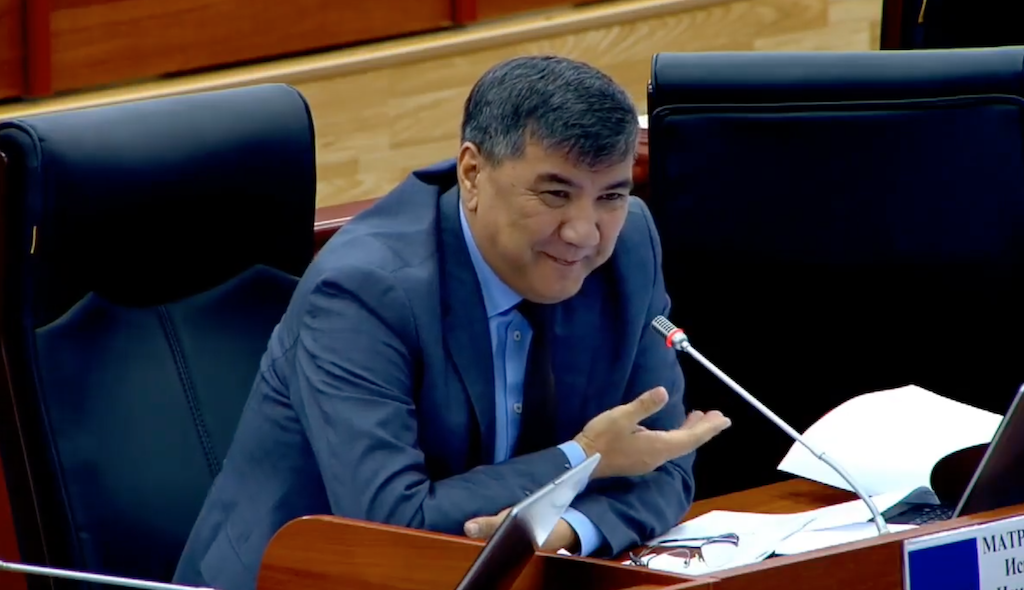 There’s chutzpah. And then there is Matraimov chutzpah.

The Matraimov family is notorious in Kyrgyzstan for the widely reported – and insistently denied, by them – claims that they have grown wealthy by virtue of their deep involvement in the shadier side of the state customs service.

But one member of the clan, Iskender Matraimov, a deputy in parliament, sought to dispel impressions of the family’s acquisitiveness by insisting to lawmakers on February 5 that he wanted the government to stop disbursing subsidies to his native region.

As Matraimov explained, four sub-districts of the Kara-Suu district, which lies in the south of the country near the Uzbek border, have for years been receiving grants from the capital to cover budget shortfalls. But Matraimov said that he had been informed in a letter from the head of the district, who happens to be his younger brother, Tilek Matraimov, that these generous handouts have been surplus to requirements for the last two years at least.

“The Finance Ministry insists on giving these 37 million som ($530,000) per year. But the district council head himself says: ‘Get these subsidies away from us, we have no need for these equalizing grants. We are perfectly able to finance ourselves. It would be better if you would give this money to another region that does not have enough funds,’” Matraimov told fellow lawmakers with a smirk and a chuckle, as he quoted the words of his brother, who has been running the Kara-Suu district for the past eight years.

This feels to some like trolling, or possibly just reputation management.

As Kloop news website reported in October, the projected government budget for 2020 envisioned 156 million som in budget-supporting grants to the sub-districts of Kara-Suu, which consists of 17 units, including the bazaar town of Kara-Suu itself. As the website noted at the time, this amount was greater than the sum earmarked for the entirety of the Issyk-Kul and Talas provinces.

The suspicion among anti-corruption critics was that authorities were diverting funds to Kara-Suu because of that Matraimov connection.

At the top of the family clan sits Rayimbek Matraimov, another sibling, who worked for two decades in the customs service, and occupied a job as deputy head of the body between 2015 and 2017. Even though he and most of his family have had little more than government service jobs, they are known to own lavish properties, in Kyrgyzstan and beyond. Just as importantly, they wield considerable political influence.

Matraimov has parlayed some of his resources toward charitable activities, much of them focused on his home Kara-Suu district. His Ismail-Ata Foundation has sponsored sports tournaments, which have been attended by prominent politicians and even the speaker of parliament, Dastan Djumabekov. The same foundation provides scholarships to underprivileged families and covers the expense of costly medical treatment for children in need.

Anticorruption activist Nursultan Akylbek wrote on Twitter to agree with Iskender Matraimov, that too much is sent to Kara-Suu, although perhaps not in the spirit that the MP intended.

“But how is it being spent? Infrastructure in the region still dates back to Soviet times. There is a lot of unemployment, and roads in the district center are just as bad as ones you would find in villages,” Akylbek wrote on Twitter.

Others took to social media, however, to hail Iskender Matraimov in person for what they described as the prosperity that Kara-Suu was experiencing under his brother’s stewardship.

"Kara-Suu is ahead of all other districts in Kyrgyzstan. Its economy is growing fast," Osh resident Nurgazy Batyrov wrote on Matraimov’s Facebook page.