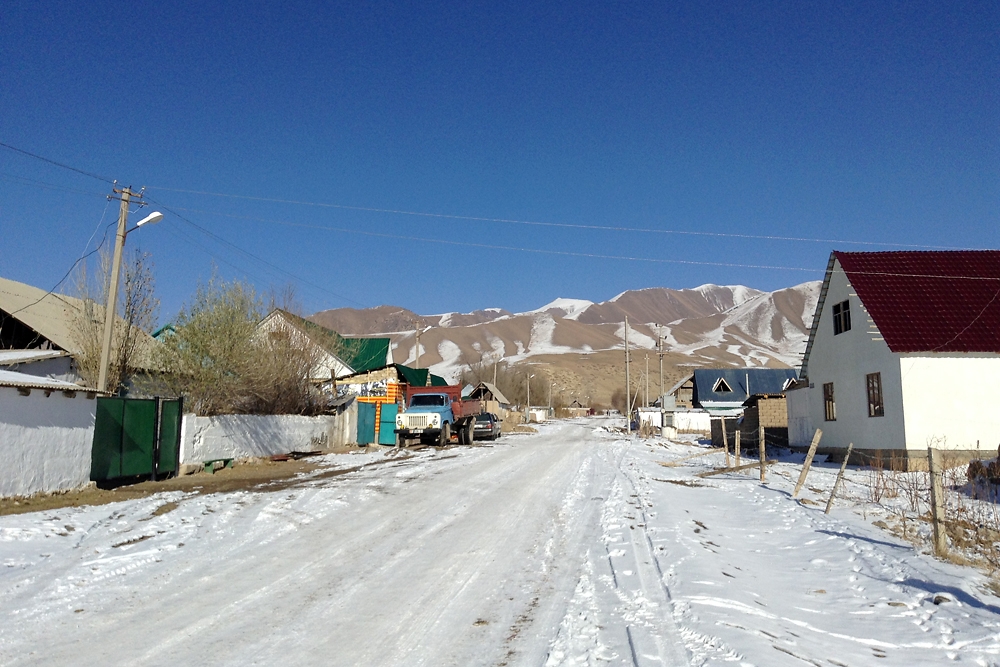 Villagers say the secret gold mine in the mountains of Kyrgyzstan’s Naryn province supports the community of approximately 3,000 people. (Photo: Asel Kalybekova)

A generation after independence from the Soviet Union, most villages in Kyrgyzstan are ramshackle, broken places, scenes of hopelessness and despair. Able young people leave – for Bishkek, the capital, or for menial jobs in Russia. But thanks to a secret gold mine, one little mountain hamlet is different.

Soviet geologists found the gold vein in remote Naryn Province in the 1940s, villagers say. But the gold was never tapped until economic collapse in the 1990s forced the village’s “wild geologists,” as they call themselves, to explore.

“Without it, our village would vanish in crime and theft,” says one miner, an agronomist by training. “It used to be a very criminal place before people started working at the mine. One wouldn’t even leave a broom in the backyard.”

Though it’s illegal, villagers say about 60 percent of local men work regularly at the mine, and it supports the entire community of approximately 3,000. With other work opportunities scant – and with gold mining increasingly contentious and politicized in Kyrgyzstan – villagers are cautious. They would only speak with EurasiaNet.org on condition of strict anonymity, insisting even the name of the village not appear in print.

Another miner, who has been working at the open-pit mine for more than ten years, says the gold helped him and his wife, a schoolteacher, raise three children and build a modest home. Now his son is studying geology in Bishkek, intending to continue his father’s work. With deeply wrinkled hands he points at the mountain: “Everything I have today is because of this mine.”

The miner, who asked to be called Bakyt, makes the three-hour trek up to the pit about once every other month with four or five colleagues in a jeep packed with warm clothes, tents, and food they can cook on a portable gas stove – meat, rice, and vegetables. “It needs to be high-calorie food, because it’s very hard labor,” he says.

On trips lasting up to a month, the miners look for quartz and pyrite – two indications of gold. “Once we see small pieces of gold glittering, we start digging with pickaxes and hoes,” Bakyt says.

The miners sort promising rocks into 50-kilo burlap sacks and return home to a jerry-built refinery. One machine crushes the stones into powder; several electric sieves wash away the dust, leaving the heavier gold on the bottom. Even hidden in a garage, the machines make so much noise they can be heard outside. But it seems everyone in the village has an economic stake in the process, and thus an incentive to keep the secret.

The gold dust contains gold, silver, iron, and pyrite. The pyrite is burned away with highly corrosive nitric acid in a process that might frighten health inspectors: Outside, in an open field, with no goggles or other protection, the miners mix the acid and powder in a stainless-steel dish and step back as they burn.

“We … put the dish against the wind, in order not to inhale the smoke,” says Bakyt, describing it first as “black, then yellow. At the end, it turns white and stops. That’s how we know it’s done.” Nitric acid is available, illegally, in Bishkek for about $5 per liter. The amateur chemists remove iron with the help of magnets. Eventually, they say, the gold dust is about 83-85 percent gold and about 15 percent silver. This compound is sold to one of several middlemen in the village at an agreed $4-5 discount off world market price, per gram, because of the silver.

Villagers keep a close eye on market price fluctuations with the help of mobile Internet connections.

Those not directly involved in the mining also benefit, explains a member of the elected local council. Shops in the village are well stocked and several men hire themselves out as drivers to ferry miners to the site. Unlike many Kyrgyz villages, where most young men have migrated away to search for work, few are eager to leave. Some who left in the 1990s have even returned.

The mine “benefits these people and the whole village. Everyone is doing what they can to get by,” the official says. “Plus, gold miners contribute money to social events. There’s both an economic and social impact.”

The economic benefits may trickle down illicitly to local officials, too – a phenomenon widespread in Kyrgyzstan and throughout the former Soviet Union. One villager said police sometimes stop vehicles on a road from the mine, demanding a “toll” of 300 som (about $6) per bag of stones. (Each vehicle returning from the mine carries up to ten bags.)

Asked if the miners have the technical expertise to handle and store chemicals like nitric acid, the council member says locals are more careful than foreign investors because “they live here.” Foreign companies are often faulted in the local press for environmental breaches - in some cases justly, in others not.

He says villagers have tried to get permission to operate the mine legally, but never heard back from Bishkek. Now, with parliament considering nationalizing the country’s only significant gold mine, Canadian-owned Kumtor, the villagers are afraid to ask again. “I don’t believe the government will listen to us, they will just ban mining,” the council member says.

The off-the-radar mine was contested in the not-too-distant past. In 2011, Kyrgyzaltyn, the state-run gold company, tried to sell it to a Chinese firm, according to Radio Azattyk. The decision seems to have been put on hold after villagers protested in the provincial capital, Naryn.

“This is theft. It cannot be allowed and should be prosecuted by the local government,” said Kadyrbek Kaketaev, recently retired as deputy director of the State Geology Agency.

But villagers have no intention of stopping.

“We don’t care whether it’s winter or summer, we are there the whole year,” says one miner. The mine doesn’t make him rich, but gives him something rare in rural Kyrgyzstan – a comfortable life. It’s also risky, he explains: Some missions return home empty-handed and rack up debt. But a successful trip can gross around $2000.

“We have gold fever and will never be healed. We will do this all our lives,” says Bakyt.

Asel Kalybekova is a freelance reporter based in Kyrgyzstan