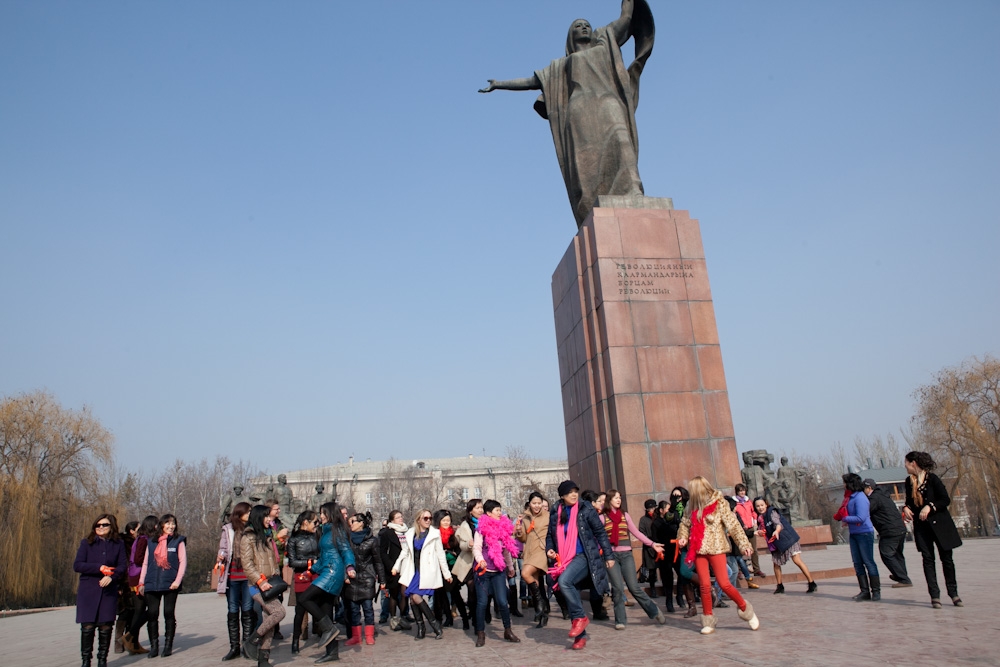 ‘One Billion Rising’ Comes to Bishkek

In addition to being Valentine's Day, February 14 this year was also V-Day, which thousands of people worldwide marked by participating in One Billion Rising, a global day of action – and dancing – to protest violence against women and girls. Bishkek was no exception.Bishkek Feminist Collective SQ organized a ‘dance strike’ in front of the statue of Urkiya Salieva, a heroine of female emancipation who was killed by conservative basmachi in 1934. The event, which was organized via social media, drew about one hundred people, who danced to a Russian cover of the One Billion Rising anthem, Break the Chain, performed by local singer Saltanat Ashirova. According to organizers, the aim of the protest was to increase local awareness about violence and injustice against women, as well as to show support for local organizations that work with women and girls who have survived violence. Co-organizer Galina Sokolova explained: “Crisis centers are constantly underfunded, understaffed and overcrowded. In 2009 and 2011 our V-Day benefit productions of the Vagina Monologues raised a total of around $4000 to support crisis centers in Bishkek and Osh. This year our team is fundraising for Crisis Center “Shans” in Bishkek, which has been working without funding for two years and still provides vital support to survivors of sexual violence. We want to make safe spaces and crisis centers visible.” In addition to organizing the flash mob, over the last fortnight Bishkek Feminist Collective SQ has recorded a series of short videos in which people explain why they are rising. Farida, for example, highlights the scale of violence against women in Kyrgyzstan: “I’m rising because there were 19,300 cases of sexual, physical and emotional violence [against women] recorded [in 2010-11]. But how many cases were there really?” Temir, meanwhile, makes it clear in his video that violence is not only an issue that affects women: “I’m rising because I’m tired of seeing violence that others don’t want to notice every day. Violence that is romanticized on a daily basis, that is seen as normal behavior to us. I’m against boys being told that they should be aggressors, that they should use force, that they should just take what they want! I want to fight all forms of violence using peaceful methods.” Violence against women remains a serious problem in Kyrgyzstan. While the recent increase in penalties for bride kidnapping is a step in the right direction, far more needs to be done to tackle cultural beliefs that make violence against women the norm rather than the exception.  A video of the event can be viewed here.