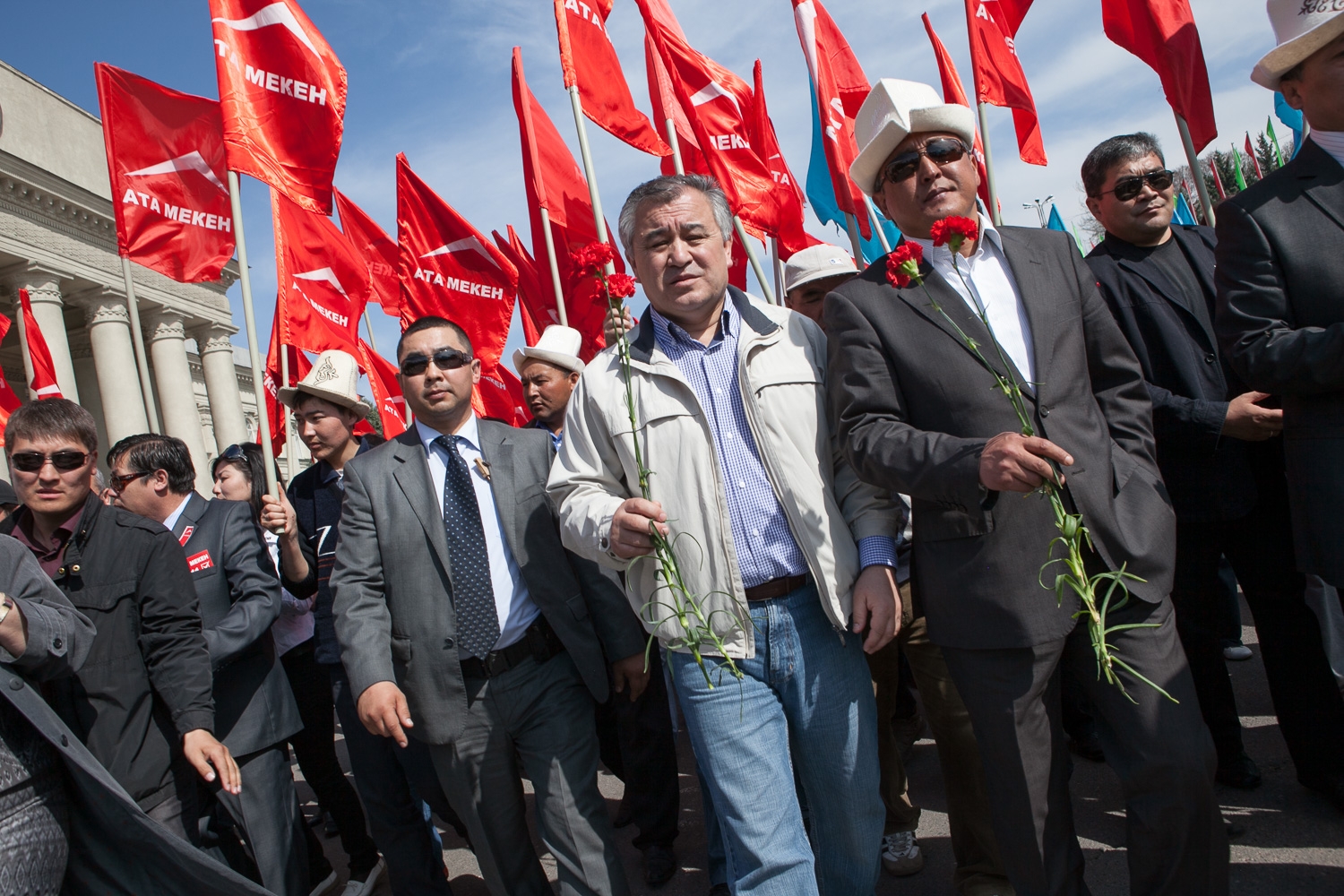 Ata-Meken leader Omurbek Tekebayev at a march to commemorate the first anniversary of the April 7, 2010, revolution. (Photo: David Trilling)

Authorities in Kyrgyzstan are threatening to spark a political crisis with their shock arrest of a prominent opposition leader.

Ata-Meken party leader Omurbek Tekebayev was held by police as soon as he flew into the capital, Bishkek, in the early hours of February 26. Dozens of his supporters demonstrated outside Manas airport and some were later detained.

Large numbers of police with riot gear were deployed to the terminal to contain any possible outbtreaks of protest. As well as Tekebayev supporters, police at one stage also detained a reporter with RFE/RL's Kyrgyz service, Ulanbek Egizbaev, and a member of parliament with Ata-Meken, Kanybek Imanaliyev.

The detention of the Ata-Meken leader followed an announcment by the General Prosecutor’s Office on February 25 that it was initiating a criminal investigation into the politician on suspicion of corruption and fraud.

Prosecutors say the case is based on materials provided by the State Committee for National Security, or GKNB, and involve an instance of alleged bribe-taking in 2010 in exchange for granting a Russian businessman preferential access during the sale of a part-nationalized mobile phone company.

Tekebayev was in Vienna, Austria, when prosecutors made their statement, but was due to return to Kyrgyzstan overnight. He vehemently denied the allegations.

A number of Ata-Meken deputies have been target of a sustained barrage of criminal investigations, all initiated by the security services, that political observers have argued are politically motivated.

On December 26, prosecutors opened a criminal probe against Aida Salyanova on suspicion of abusing her office when she was General Prosecutor — a position she occupied from April 2011 to January 2015. Last week, it was the turn of Almanbet Shykmamatov, a former justice minister, who is facing corruption charges. Shykmamatov was summoned to the GKNB for an interrogation on February 24 and was released only after almost 10 hours of questioning. The crowd of supporters that had mustered outside the building as the interrogation was taking place cheered as the deputy emerged.

The authorities are making little show of disguising the fact that this is an outright witch-hunt. On February 21, prosecutors asked the tax service to run audits on Tekebayev, Salyanova and Shykmamatov’s siblings, parents, spouses and children — 26 people in all. One of the people audited was Tekebayev’s eight-year old daughter.

Tekebayev and his allies have been accused before by the government, unconvincingly, of enriching themselves through shady involvement in the telecommunications sector, but these latest allegations appear to be an entirely fresh line of attack.

Prosecutors are claiming that while serving as deputy prime minister in the interim government that took power following the April 2010 revolution, Tekebayev demanded $1 million from Russian businessman Leonid Mayevsky in exchange for including him on the board of directors of Alfa Telecom, a company that had been partially nationalized by the incoming leadership. Tekebayev also purportedly also offered to ensure that Mayevsky could buy shares in Alfa Telecom in exchange for a fee equivalent to 10-15 percent of the sale price.

“Tekebayev did not carry out his obligations and refused to return the money. He instead threatened physical harm in the event of any further demands or information being released to the public about the situation,” prosecutors alleged in their statement.

This story, like so many other recent allegations involving Tekebayev and corruption, does not on the face of things appears extremely strong. Mayevsky, who lives in Russia, is supposed to have remained cowed in terror of Tekebayev’s reprisals for almost seven years before finally breaking his silence — coincidentally just as Kyrgyz prosecutors are throwing everything bar the kitchen sink at the Ata-Meken leader and his allies.

Just as the General Prosecutor’s Office revealed that it is pursuing this new probe into Tekebayev, a video popped up online with a lengthy monologue by Mayevsky explaining how the alleged corruption went down. Curiously, Mayevsky, who is indeed a telecommunications entrepreneur of long-standing, albeit one who has been implicated in numerous convoluted legal suits in Russia, freely admits to paying the alleged bribe.

“At the end of July [2010], two weeks [after meeting Tekebayev in Moscow], I flew to Kyrgyzstan, to Bishkek — I was again staying at the Hyatt Hotel — and I handed over $300,000. That was the first down-payment,” Mayevsky said.

On some later unspecified date, according to Mayevsky, one of Tekebayev’s proxies traveled to him — presumably in Russia, although this is not stated — to collect the remaining $700,000, in cash.

Tekebayev’s ambitions to reach high office in Kyrgyzstan were subsequently dashed, however, and all the promises made could not be kept, Mayevsky explained.

The Russian businessman said that in a desperate bid to claw back his $1 million investment, he traveled to Bishkek in December 2010 to confront Tekebayev in person. Instead of the well-spoken and good-mannered politician of old, however, Mayevsky claimed to have been met by a Mister Hyde personality speaking in a “bandit-like language.” Quoting this purportedly transformed Tekebayev at length, Mayevsky explained how he was threatened in all manner of ways.

“If you come back here… I am the owner of this country. Let me not hear anymore about money. If you show your face again, you might never return [to Russia]. And if you do return to Russia, then the customs officers will find drugs in your luggage and you’ll be arrested for drug trafficking,” Mayevsky said, quoting Tekebayev’s purported threats.

“He behaved most impudently … he spoke in this kind of semi-slang,” the Russian businessman said.

Judging by some throwaway phrases, Mayevsky’s video address seems to have been filmed in Kyrgyzstan, which raises the question of why he is also not facing criminal charges from Kyrgyz prosecutors given that he is admitting to paying $1 million in bribes.

Speaking from the Austrian capital, Vienna, Tekebayev denied ever asking for or ever receiving that money.

On the face of it, there is no obvious reason why the authorities, and President Almazbek Atambayev in particular, would be hounding Tekebayev and his allies so assiduously. Ata-Meken is the weakest party in parliament at present, having only narrowly got over the required threshold to get in during the 2015 vote.

What is clear though is that the current ruling elite have taken every measure possible to smooth the road ahead of the presidential elections in November. Atambayev is unable to run again as presidents are limited to one term only, so speculation is rife as to who might succeed him and whether that person will be a handpicked successor.

Tekebayev has proven a indefatigable thorn in Atambayev’s side, so it is possible that the campaign against him might be intended in part to prevent him or an associate from considering a run. Such concerns, if they are indeed what lie behind the numerous criminal prosecutions in train, seem overblown, however, given that Tekebayev would, if we were to throw his hat into the ring, likely pose little threat to the candidates already in the running.

This report has been updated to include information about Tekebayev's arrest.