Tekebayev says he was warned to stop protesting the results of the election. 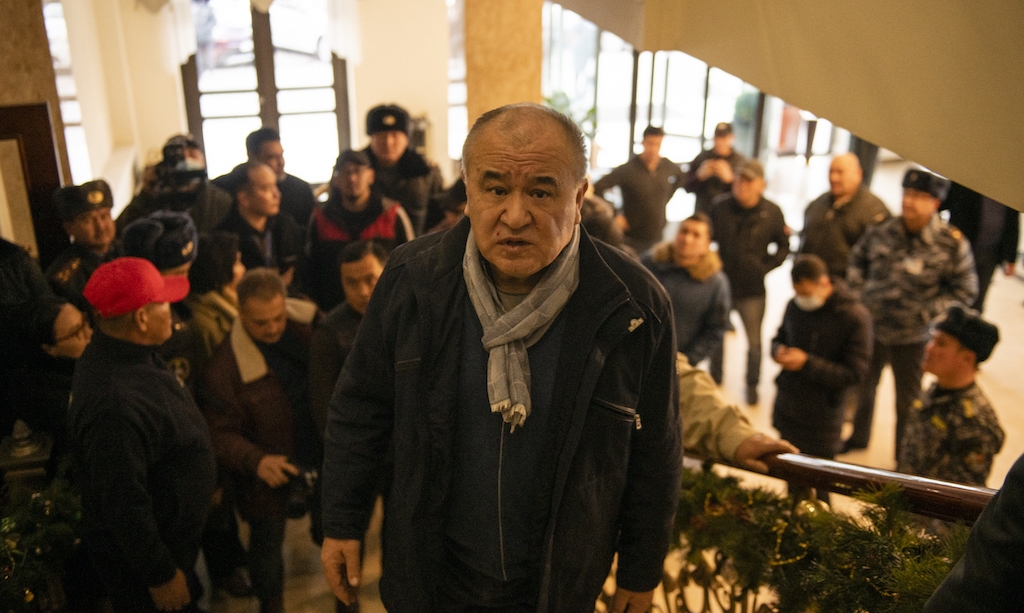 Tekebayev at the Park Hotel after the assault. (Photo: Danil Usmanov)

An opposition politician in Kyrgyzstan was surrounded and assaulted on the street by a large group of men on December 1 in an attack his allies have described as a “political hitjob.”

Omurbek Tekebayev, the leader of the Ata-Meken party, told Eurasianet he was due to meet representatives of other parties at the Park Hotel in Bishkek when the mob forced its way into the premises.

“There were about 70 people, I was struck about 10 times,” he said. “They dragged me out onto the street, they wanted to take me away to an unknown location. They said that they would deal with me there.”

Tekebayev said he was told he had been singled out for this treatment over his calls to hold pickets in protest at the results of parliamentary elections on November 28 that saw his Ata-Meken party fail to overcome the necessary threshold for entering the legislature.

Several opposition groups have cried foul over the vote-counting process, which they say has been marred by irregularities. In the hour after polling stations closed, the Central Election Committee’s automated electronic ballot-counting system showed a group of opposition parties as having got enough votes to get into parliament, but the figures were later revised.

Election officials have said the incorrect figures were produced as the result of a programming glitch.

The men who attacked Tekebayev stole his phone as well as his glasses, the politician told Eurasianet. Tekebayev’s lawyer wrote in a Facebook post that a phone-locating app later seemed to place the stolen device in the immediate proximity of the headquarters of the State Committee for National Security, or GKNB, the successor agency to the KGB.

Tekebayev said he believes the attack on him was intended to discourage the holding of any more protests against the results of the election. He implied that elements close to President Sadyr Japarov might be involved.

“They want to enforce the outcome of the vote, not with a decree from the Central Election Commission, but with fists and the threat of political terror,” he said.

Japarov’s office, meanwhile, said he had ordered the Interior Ministry to conduct a thorough investigation into the attack on Tekebayev and to find those responsible.

“As to what has happened, it cannot be ruled out that there are certain elements trying to exploit this event for their own purposes,” Japarov said through a spokesperson. He did not specify what he meant by those remarks.

Japarov himself came to power in October 2020 on the back of days of rowdy protests mounted by his supporters. The parliamentary election held over the weekend was intended to close the chapter of political uncertainty initiated by his rise to high office.

Security officials warned in the days before the election, however, that they would not tolerate another similar wave of protests this time around. On November 26, in fact, the GKNB announced it had detained 15 people on suspicion of plotting to do that very thing.

“One thousand aggressive young people were being recruited for participation in large protests,” the GKNB said in a statement.