As suspicions center on Turkish intelligence, the Kyrgyz president began an official visit to Turkey. 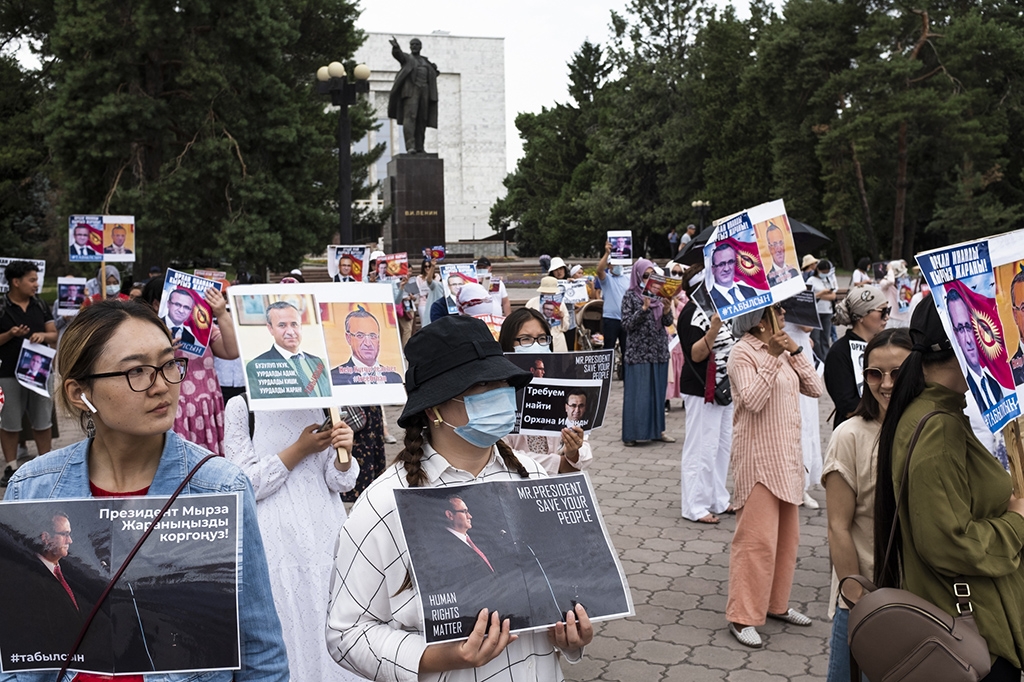 Supporters of Inandi rally in Bishkek on June 8. (Danil Usmanov)

The family and supporters of Orhan Inandi, a well-known businessman who vanished in Kyrgyzstan’s capital more than a week ago, are certain they know where he is.

The problem, they say, is how to get him out.

Suspicions all center on Turkey’s embassy in Bishkek.

Inandi is a natural target for Ankara’s security services. The Turkish-born citizen of Kyrgyzstan founded a local network of Sapat schools inspired by the teachings of Fethullah Gulen, a foe of President Recep Tayyip Erdogan. And Turkey has shown little hesitation in using extralegal measures to capture and repatriate its perceived enemies.

So when Inandi’s car was discovered, empty and with a door flung open, overnight on May 31 in the courtyard of a Bishkek high-rise, thoughts quickly turned to the troubling possibility of state-sponsored kidnapping.

His wife, Reikhan, again this week voiced her suspicions that Inandi is being held at the Turkish Embassy and being pressured into renouncing his Kyrgyz citizenship.

“Orhan was this morning forced to write a statement relinquishing his citizenship so that they can take him out of the country,” Reikhan Inandi said on June 6, citing claims of uncertain provenance. “I might consider these mere rumors if it was not how Sapat teachers are always taken back to Turkey through the use of slanderous allegations of terrorism.”

Every day since the disappearance, alumni and students of the Sapat educational network, together with their parents and teachers, have been holding vigils urging the authorities take action. A rally on June 8 drew around 200 people to central Bishkek. Attendees held up signs reading “Let him be found” and, in English, “Mr. President save your people.”

Pickets outside the Turkish Embassy have produced little response. The deputy director of Sapat, Amir Sultanmuratov, has said that no representative from the mission has come out to meet them.

“We have contacted the embassy, tried to call, held rallies in front of their building, but they did not answer at all,” Sultanmuratov said.

The embassy has refused flatly to respond to queries from journalists.

The public has learned about the official Turkish position on this saga only through Kyrgyz diplomatic sources. Local media on June 8 cited Deputy Foreign Minister Aibek Artykbayev as saying that the Turkish ambassador had described claims made by Inandi’s wife as “nonsense” and “untrue.”

Campaigning is as a result being focused instead on the Kyrgyz authorities and what Inandi’s supporters say is their failure to take action.

“The work of law enforcement agencies is producing no results. He is still declared missing, and we can get no useful information. We are very worried about his safety,” Sultanmuratov said.

The Interior Ministry has not outlined any exact hypotheses, but insists it is searching for Inandi high and low, in fields and mountain areas, in landfills and in rivers, in abandoned factories and in parking lots. Anywhere, in fact, but the Turkish Embassy, which is off-limits to local authorities under the terms of the 1961 Vienna Convention on Diplomatic Relations.

Matters took another strange turn on June 6, when the prominent and jingoistic pro-government Istanbul daily Sabah published an article alleging instead that Kyrgyzstan’s own security services were responsible for the disappearance. The author of the piece, Ferhat Ünlü, has made similar claims and weaved an elaborate alternative theory on Inandi’s disappearance on the TGRT Haber television station.

Ünlü has described Inandi as the “Central Asia imam for FETO” – that being the Turkish-language acronym for what Ankara dubs the Fethullah Gulen Terrorist Organization. The Gulen movement in Kyrgyzstan is forging a parallel state-within-a-state and accordingly poses a threat to the country’s government, Ünlü has argued, albeit without attempting to provide clear evidence for his allegations.

The State Committee for National Security, or GKNB, has declined to comment on Ünlü’s claims.

Ünlü’s conjecture, which is spiced up with specific accusations that Gulen supporters in Kyrgyzstan are plotting an overthrow of the government later this year, is evidently designed to sow anxieties in the mind of Kyrgyz President Sadyr Japarov, who happened in a curious bit of timing to start an official visit to Turkey on June 9.

Business during the visit will include talks with President Erdogan, dialogue on investment and further cooperation within the auspices of the Ankara-dominated Cooperation Council of Turkic-Speaking States, also known as the Turkic Council. The presence of a deputy defense minister in Japarov’s delegation suggests security cooperation will also be on the agenda.

It is difficult to imagine that the topic of Inandi will not come up. The presidential administration has been largely mute on the affair, although it did notably issue a statement of concern shortly after the businessman’s disappearance and pressed the GKNB and the Interior Ministry to step up their searches.

If Inandi does turn out to have been abducted by the Turkish security services – and even state-loyal media is starting to hint that this might indeed have happened – Ankara will need to persuade Japarov’s government to acquiesce to him being spirited out of the country.

As an important economic partner, Turkey has no shortage of levers. Bilateral trade turnover in 2020 reached more than $500 million, but the stated hope is for that to double, Kyrgyzstan’s ambassador to Turkey said last month, without outlining specific timeframes.

Bishkek also hopes to gin up more Turkish investment. Sagas like the government’s campaign against the operators of the Kumtor gold mine have made attracting foreign capital an especially difficult undertaking, making the interest of Turkish investors a particularly appealing option.

This all leaves Inandi in a parlous situation, not to speak of the Sapat network he helped usher into existence in Kyrgyzstan. According to Sapat’s own website, the organization has created 16 lyceums, the Ala-Too International University, an international school and four primary schools. More than 10,000 children and young people are currently said to be studying at those institutions.

As Sultanmuratov, the deputy head of Sapat, told Eurasianet, the network’s alumni continue to endure hardships because of Ankara’s relentless hounding of Gulen-linked groups.

“Some of our graduates have been unable to get into Turkey and had to return. Some were deported. Some have been made to undergo interrogations because of their supposed links to Gulen,” he said.