Alarm is growing that the government's critics will face mounting intimidation. 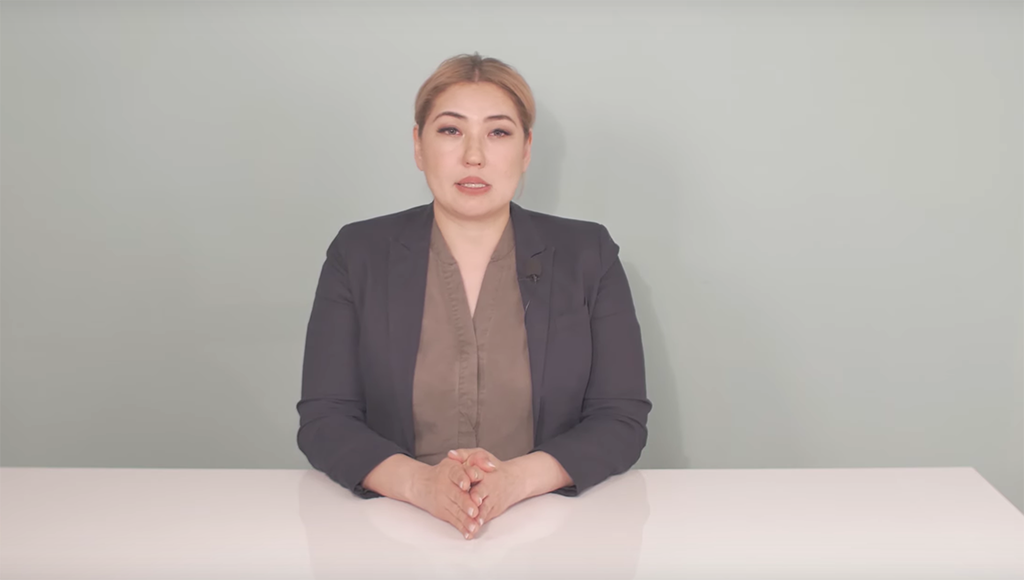 Aitmatova speaking on the YouTube channel of her Umut-2020 group in November.

The partner of an activist who has spearheaded a burgeoning anticorruption movement in Kyrgyzstan has been detained while seeking to fly out of the region from an airport in Kazakhstan.

A lawyer for a Chinese national whose complaint to the Kyrgyz security services led to the detention said on December 20 that Syrgak Kenzhebayev had defrauded her client of $350,000.

Kenzhebayev’s wife, well-known activist and former lawmaker Shirin Aitmatova, said this development was politically motivated and a clear reprisal for her efforts to raise public awareness of corruption.

Kenzhebayev was expecting to fly out of Almaty on December 19 to accompany Aitmatova’s mother, who is seeking medical treatment in Malaysia. He was, however, held at passport control and had been deported to Kyrgyzstan within a matter of hours.

The complaint against Kenzhebayev was lodged by an ethnic Uyghur from China identified by Kyrgyz security services, more commonly known by the acronym GKNB, by the initials M.M. The man’s lawyer, Zhanara Askar kyzy, contends that the Chinese national had gone to Kyrgyzstan to invest in a project intended to improve road safety through the use of closed-circuit cameras.

“Kenzhebayev took my client’s passport and refused to give back the $350,000. Syrgak Kenzhebayev constantly threatened him with his connections to the Interior Ministry. He said that my client would be deported,” Askar kyzy said.

Aitmatova described what was happening to her partner as a form of political repression and said that it was a reprisal for the work she has done as part of her anti-graft Umut-2020 movement. She said that the man whose complaint precipitated her husband’s detention worked for a company owned by another ethnic Uyghur Chinese businessman, Khabibula Abdukadyr, who was named in a recent bombshell media report as a key figure in a sprawling smuggling and money-laundering operation.

In the report, a joint effort between the Organized Crime and Corruption Reporting Project, or OCCRP, RFE/RL’s Kyrgyz service and Bishkek-based news website Kloop, Abdukadyr was identified as a close associate of former deputy customs chief Rayimbek Matraimov, whom anti-corruption activists accuse of amassing vast riches by facilitating smuggling.

Matraimov admits to being acquainted with Abdukadyr, but he has angrily denied the suggestion that they connived to spirit hundreds of millions of ill-earned dollars out of the region.

Aitmatova’s Umut-2020 movement said other members of the group have faced pressure in recent days, following a rally of hundreds of people in central Bishkek at which attendants demanded, among other things, that the authorities pursue investigations into Matraimov’s wealth. One activist called Nursultan Akylbek said he was informed through acquaintances that he could soon face prosecution.

Rights activist Dinara Oshurakhunova and lawyer Nurbek Toktakunov, both of whom have been involved in public events critical of the government, have likewise stated this week that they have received threats of physical reprisals.

“They called me as said: ‘We warned you already, cut it out with all these meeting-shmeetings. Calm down or we’ll cut you,’” Toktakunov said.

Toktakunov said he has filed a petition with the police over the alleged threat.

The finance police have ostensibly been investigating the financial holdings of Matraimov – whose family is known to own lucrative properties and oversees large philanthropic organizations despite him having only ever worked in relatively low-paid government posts – for the past year or so. But the lack of any findings has led many to conclude that the investigation is likely a smokescreen.

President Sooronbai Jeenbekov, meanwhile, has brushed off the mounting array of incriminating reports about Matraimov, insisting that activists should bring him “facts” instead of making accusations.