Amankulov appeared to tell Russian colleagues independence might have been an error. 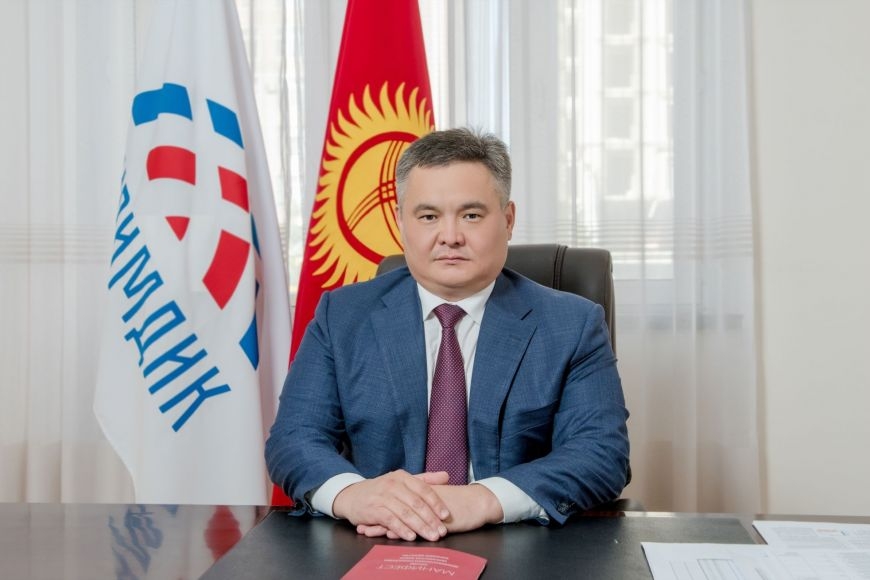 The leak of video footage showing a prominent politician in Kyrgyzstan appearing to suggest the country should reconsider national independence has injected eleventh-hour drama into a parliamentary election lacking clear demarcation lines among the parties.

Marat Amankulov, the chairman of Birimdik, a self-styled Democratic-Socialist party closely aligned to President Sooronbai Jeenbekov, is understood to have made the remarks during a roundtable in Russia earlier this year, although the exact date of the footage is in dispute.

“The ideology of our party is Eurasianism, and that is what we are aspiring toward,” Amankulov is heard to say, referring to the then recently formed Birimdik. “Thirty years of life in independence have shown us that the time has come for us to rethink and return to the fold.”

Amankulov chuckles after making the remark, raising some doubt as to whether he was speaking in earnest. In a statement issued after the video had circulated widely across social media, where it has generated much consternation, Amankulov described the leak as a “provocation” and said his remarks had been taken out of context.

“Independence is the greatest achievement of our people. Preserving and strengthening the statehood of Kyrgyzstan is the sacred duty of every citizen,” he said in the statement.

Amankulov said he was responding in his remarks to a speech delivered previously by Ivan Belekov, a member of Russia’s State Duma and a former chairman of a popular assembly in Russia’s Altai Republic, whom the Birimdik leader cited as having spoken in praise of Altaic culture. In the same snippet, Amankulov is heard to say that Birimdik hoped to hold a conference that would include guest speakers like Alexander Dugin, perhaps the best-known proponent of the Eurasianist idea. Dugin’s positioning is explicitly hostile to the West and has cast Eurasianism as a “new geopolitical gospel” with Russia at its heart.

Kyrgyzstan is set to vote for a new 120-member parliament on October 4.

In his statement, Amankulov claims that the video footage was captured at an event in 2019, shortly after his ascent to chairmanship of his party in September that year. Others have asserted that the event actually took place on February 27, in Moscow.

Birimdik’s commitment to the Eurasianist cause, an esoteric geopolitical ideology understood in basic terms as a trend toward political consolidation among nations in the zone broadly termed as Eurasia, is in the forefront of the party’s branding and election agenda. Large campaign billboards in the capital, Bishkek, proclaim that “the heart of Eurasia beats in Kyrgyzstan.”

In more concrete terms, this represents a renewed commitment to setting the country on a path of deeper economic integration with the Russian-led Eurasian Economic Union, or EAEU. Although it currently exists only as a trading bloc, there is good reason to believe that one ultimate goal for the EAEU is to emulate the European Union, on which the bloc is clearly modeled, and pursue some form of political union at a later date.

Indignation over Amankulov’s remarks has mostly been confined to social media since the footage surfaced on September 26, but protest rallies have been planned to take place in Bishkek and Osh on September 27.

It is far from certain that the scandal is likely to have serious electoral consequences for Birimdik, but if it does, there is every chance the opportunity will be seized by parties emphasizing sovereignty and patriotism as election themes.

Judging by campaigning spending alone, a strong contender for primacy in the next parliament is Mekenim Kyrgyzstan, a party understood to be bankrolled by shadowy former deputy customs chief Rayimbek Matraimov, who is deemed by some to eclipse even Jeenbekov for influence. The party has cast itself as a champion of liberal and pro-business values, largely steering clear of foreign policy issues in the process. Its party campaign program makes no clear reference to diplomatic affairs, although one passage on its plans for the Osh region is telling.

One priority is described as “development of infrastructure to ensure trade of this southern region with foreign countries.”

As a land bridge between China, on its eastern flank, and Uzbekistan and Tajikistan to the west, Osh region is arguably better positioned to seek its fortunes beyond markets within tariff walls erected by the EAEU.

In that optic, the surfacing of Amankulov’s unabashedly pro-Eurasian comments are useful in tracing one important fault line in an election campaign that has mainly hinged on brand recognition rather than clear ideological distinctions.