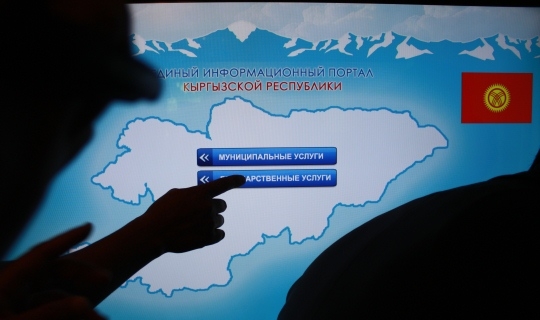 Security services in Kyrgyzstan have arrested a group of government officials over suspicions that they may have unfairly favored a Lithuanian company in a state tender for a contract to produce booklets for biometric passports.

Some aspects of the investigation have triggered outcry among representatives of the local IT community, who say the arbitrary conduct of the State Committee for National Security, or GKNB, could derail the government’s digitization agenda.

Local media reported that the GKNB on April 16 detained three people: the head of state-owned IT company Infokom and two senior officials at the State Registry Service, known by its Russian-language acronym GRS. The arrests are related to a tender awarded in late 2018.

The GKNB had hinted at imminent action in an April 2 statement in which it revealed that it was looking to ties between GRS officials and the winner of the tender, Vilnius-based Garsu Pasaulis.

Among the details deemed compromising by the GKNB was the fact that a losing contender had been excluded from competing despite offering a bid 253 million som ($3.6 million) under that proposed by the winner. Another was that officials went on foreign trips funded by the winning bidder.

The bid offered by Garsu Pasaulis was for around 940 million som ($13.5 million), an almost identical figure to rival offers from companies based in France and Germany, respectively. Another Germany-based company, Muhlbauer ID Services GmbH, offered to fulfill the same contract for the equivalent of $9.9 million. Another losing bid, for $18 million, was from a company controlled by Kazakhstan’s National Bank.

The GRS had prior to putting out the tender earmarked 1.2 billion som for contract.

A report prepared jointly by the Organized Crime and Corruption Reporting Project and Bishkek-based media outlet Kloop.kg alleged that Garsu Pasaulis was given an easy ride during the tender process, while rival bidders were excluded from the running on technical grounds.

Losing bidders have reportedly since filed complaints with a tender review body about what they feel was their unfair exclusion from the contract, which has been allowed to lapse in the light of ongoing investigations.

Although some will be heartened by the probe into a suspect tender process, there is also dismay over who the GKNB has elected to target in its investigation.

Only one of three arrested officials, deputy GRS chairman Ruslanbek Sarybayev, was a member of the tender commission. Two of the others, Talant Abduallayev of Infokom and another senior GRS official, Daniyar Bakchiyev, do not appear to have been directly involved in awarding the contract.

Aziz Abakirov, a respected tech-sector entrepreneur, expressed his indignation in an open letter to President Sooronbai Jeenbekov to announce his resignation from an expert committee attached to Jeenbekov's office on implementing e-government.

Abakirov singled out Abduallayev as somebody who had made major contributions toward transparency and the digitization of bureaucracy by making the state budget and tender registry available online.

“We no longer believe in you,” Abakirov told Jeenbekov, while adding that “the digitization of the Kyrgyz Republic is under major doubt.”

Meanwhile, Garsu Pasaulis has denied all wrongdoing. Company director Ana Janauskiene is quoted by OCCRP as saying that although Garsu Pasaulis had paid for some Kyrgyz officials to go on foreign trips “around 2015 or 2016,” this was “absolutely unrelated to this tender.”

The GKNB, which took over the anti-corruption beat in 2011, is coming under fresh fire for its strong-arm tactics.

On April 1, the agency elicited howls of protest after subjecting a local journalist who sits on a tender review commission, which has also been looking at the passport case, to a grueling eight-hour interrogation. The journalist was allowed to go free after questioning.

That voluntary review commission, which was overhauled by GRS head Alina Shaikova after she took charge of the department of state tenders in December 2017, won praise last year for nixing contracts won by bidders that had clearly failed to meet requirements.

That notwithstanding, Shaikova’s efforts have earned her only dressing-downs from Jeenbekov and hitjobs in pro-government media.

On April 19, the prime minister’s office announced that Shaikova was being dismissed, likely in anticipation of her resigning.