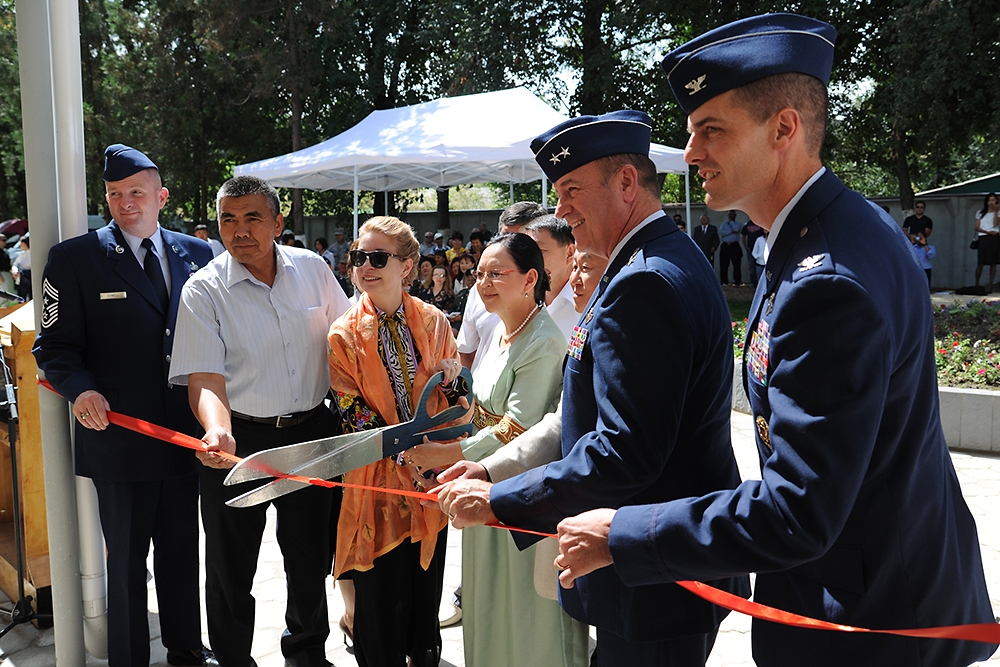 American taxpayers spent hundreds of thousands of dollars refurbishing a women’s shelter outside Kyrgyzstan’s capital less than five years ago. Though the Central Asian country is desperately short of such crisis centers, the shelter never functioned and, a member of parliament now says, was improperly privatized instead.

As part of its 2010 humanitarian aid budget, the US airbase at Manas near Bishkek spent nearly $750,000 refurbishing a two-story hospital that was slated to become the Shopokov Women’s Development Center. At the time, a military spokesperson said the building was to serve “battered women” and provide “shelter for up to 55 women and their children.” It was owned by the Kyrgyz government and managed by Zamira Akbagysheva, at the time president of the Kyrgyz Congress of Women.

But shortly after it opened with fanfare in August 2010 – with the American ambassador and the Manas commander in attendance – EurasiaNet.org found the building shuttered and apparently being used to host for-profit language classes and photocopying services.

On February 3, a member of Kyrgyzstan’s parliament accused Akbagysheva of improperly privatizing the building. MP Aynuru Altybaeva told the Committee on Social Policy that Akbagysheva had transferred ownership of the building – “a beautiful, two-story hospital with a big garden” – about three years ago from the state to her son, paying 18,000 som (today $300).

“Now the building is closed, it is used neither as a hospital nor as a crisis center,” Altybaeva said, in comments carried by AKIpress. She recommended parliament open an investigation.

Reached by phone on February 3, Akbagysheva denied she had done anything illegal and said that neither she nor her son own the building. Instead, she claimed the building is owned and has been owned since before the Manas-funded renovations by a local organization, an entity she called the Center for the Development of Women and Children in the town of Shopokov. That account is different from one that Akbagysheva gave EurasiaNet.org in 2011, when she claimed the Kyrgyz government owned the building. Under the terms of the agreement with Manas, the building was to remain property of the Kyrgyz government.

Asked if EurasiaNet.org could visit the building in a follow-up text message on February 3, Akbagysheva replied, “This is not a crisis center.”

Altybaeva, the lawmaker, told EurasiaNet.org she has had trouble accessing the building and that it is not being used as a shelter. Asked how she learned about the privatization, she said she made an official “MP’s request” to the Shopokov town council.

She said she had tried to sue for the building to be returned to government ownership, but said a local court in Shopokov would not hear her case because she was not a local woman needing the services of a shelter.

The MP insisted it is illegal to privatize “social” buildings (hospitals and schools, for example) in Kyrgyzstan. Altybaeva added the town council in Shopokov, where the building is located, is responsible.

The $748,700 the US military spent on the project accounted for one-third of the Manas airbase’s 2010 humanitarian aid spending, when most projects cost in the range of $20,000.

There is no doubt Kyrgyzstan needs shelters for women, however. Last month, Human Rights Watch reported that Bishkek, a city of approximately 850,000, has only one shelter for women suffering domestic violence and that it has only 15 beds.

“Survivors of domestic violence repeatedly told Human Rights Watch that they remained in abusive situations because they felt they had ‘nowhere to go.’ Women also reported that fear of being homeless deterred them from reporting abuse to the authorities or seeking assistance,” the watchdog said in written testimony to the UN’s Committee on the Elimination of Discrimination Against Women.

Akbagysheva has not been charged with a crime. But her failure to operate the women’s shelter as envisioned raises questions about the Pentagon selection process for a local implementing partner and why such a large portion of its humanitarian budget was earmarked for one partner.

Back in 2011, a Manas airbase spokesperson said it was not the US military’s responsibility to oversee how humanitarian funds are used after they have been disbursed. Manas closed last June after 12 years operating at Bishkek’s international airport.