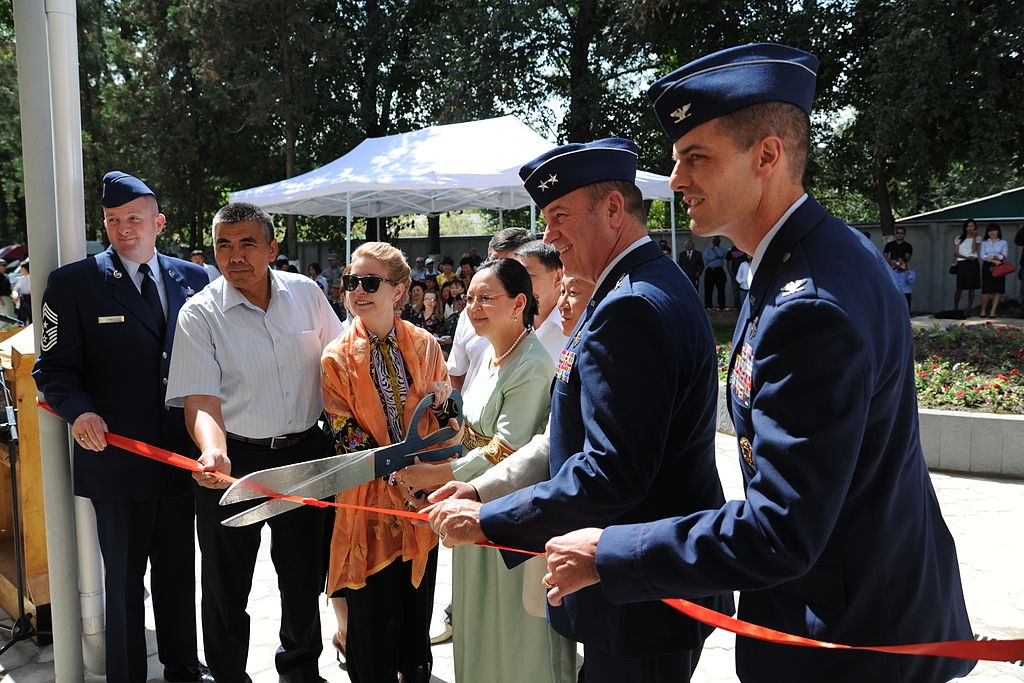 The official opening of the shelter that never was. (Photo: US Air Force/Staff Sgt. Nathan Bevier)

A derelict hospital refurbished last year to serve as a battered women’s shelter with nearly $750,000 in aid from the US military in Kyrgyzstan has never been used for its intended purpose. The disconnect between the project’s mission and its outcomes, plus its exorbitant cost, is casting doubt on the judiciousness of the Pentagon’s aid spending in the beleaguered Central Asian country.

The Shopokov Women’s Development Center, located some 15 kilometers outside the capital, Bishkek, opened with fanfare on August 25, 2010, as “a place of refuge during difficult times,” according to a senior Air Force officer quoted by US Central Command at the time. The ribbon-cutting ceremony was attended by then-Ambassador Tatiana Gfoeller and Col. Dwight Sones, commander of the Manas Transit Center, an airbase critical to Washington’s war effort in Afghanistan. A spokesman for Manas said on April 19 that the center -- which took one year to renovate and cost one-third of the base’s 2010 humanitarian aid spending -- was to be used as a “development center for battered women” and “a shelter for up to 55 women and their children.”

Yet today the center stands empty. Signs affixed to the fence advertise language classes and photocopies. Cows graze in a back lot and the brightly painted playground is dusty. Three neighbors interviewed by EurasiaNet.org said the building is almost never used. One, who had ventured inside regularly during the makeover, described the renovations as “top-rate” and was particularly impressed by the laundry, washroom and kitchen. All the interviewees requested anonymity out of fear for their personal safety.

Presented with these observations, the head of the non-governmental organization running the center acknowledged that no women live there and explained that its “direction had changed a bit,” steering away from victims of violence. Zamira Akbagysheva, president of Kyrgyzstan’s Congress of Women, said in an interview on April 14 that a small-scale survey prior to the center’s opening showed that local residents identified their top-priority needs as “trainings,” microfinance loans and classes for children. She also said that “everything is working” at the center, but it was now having “temporary difficulties,” which she attributed alternately to a lack of running water and shortfalls in funding.

Akbagysheva gave a breakdown of the center’s activity since its opening in a follow-up email on April 15. She wrote that the center had not been functional from September to November because it had been securing gas, electricity and building-code certification. She also gave a full list of program activities from December through April: one training session on starting one’s own business; one seminar on women’s reproductive health; one competition for journalists; one seminar on the dangers of osteoporosis; and an unspecified number of art, computer and language classes for children. Akbagysheva also said the center had provided seven micro-loans of about $425 each.

The Manas spokesman explained that ensuring program activity was not the base’s responsibility. “Once a facility has been renovated, the standard procedure is to transfer ownership and sustainment to the Kyrgyz government,” he said. (Both the spokesman and Akbagysheva said the building is government-owned.)

According to Akbagysheva, the center’s modest activity is funded by the Congress of Women, which relies primarily on contributions from its 222,000 members. “We don’t have a grant or help from international organizations,” she said.

Debates about the effectiveness of foreign aid to developing countries have occupied scholars and aid providers for some years. One major concern has been corruption, a bane for Kyrgyzstan, which ranked 164th of 178 countries in Transparency International’s 2010 Corruption Perceptions Index. Another obstacle has been a lack of stringent mechanisms for needs assessment, monitoring and evaluation.

Akbagysheva and her organization have not been accused of wrongdoing. She repeatedly told EurasiaNet.org that she had not seen a cent of the $748,700 spent on the reconstruction, and the Manas spokesman said the “funds were remitted directly to the contractor.”

But the group’s designation as implementing partner on such an expensive project -- most of Manas’s seem to cost less than $20,000 -- suggests a dangerously laissez-faire approach on the part of the donor, the US military, whose spending over the past decade has exacerbated Washington’s debilitating deficit. It appears the Congress of Women was not selected through a genuinely competitive tender, and it is not clear how the center’s original purpose was determined or how its sustainability was assessed, if at all.

Furthermore, some of the publicly available information about the organization’s work should have raised red flags. For example, while a World Bank-affiliated website lists the Congress of Women as a provider of IT services, the group has no functioning website and at least four sites listed on various directories as belonging to the group -- including the two on Akbagysheva’s business card -- do not work.

Akbagysheva herself has been a fixture of Kyrgyzstan’s public life for the past 20 years. A pioneer of women’s business incubators, she also hosts a twice-weekly television talk show and regularly presides over official celebrations of International Women’s Day, a major holiday in the former Soviet Union. She chairs the Social Affairs and Corporate Responsibility Committee of the local American Chamber of Commerce and is in the process of expanding her NGO work to HIV/AIDS.

In a brief conversation on April 19, Akbagysheva confirmed that the beneficiaries of her center’s work are not victims of abuse and that her organization does not offer assistance to such victims, despite the American donors’ expectations. However, experts contend that Kyrgyzstan badly needs women’s shelters. A 2009 study found that about one-third of the country’s women suffer physical abuse in the home.

“In Bishkek, for 1.5 million people, we have only one crisis center, which has a shelter with only 10 beds,” said Alexandra Eliferenko, head of the Association for Crisis Centers, which carried out the study. “For a city as big as Bishkek, it is not sufficient. In Osh, Jalal-Abad and other regional cities, we have no shelters at all.”