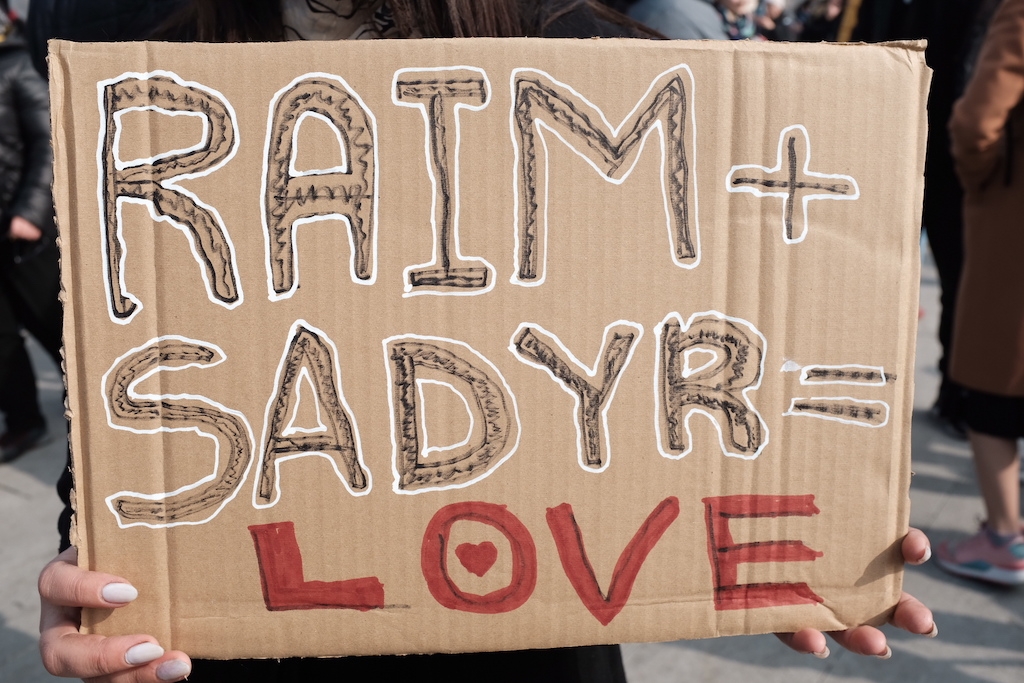 Not a sign of the times: A slogan reflecting widespread suspicions that President Sadyr Japarov is in cahoots with former customs boss Rayimbek Matraimov. (Photo: Danil Usmanov)

Kyrgyzstan’s bogeyman No. 1, the corrupt former deputy customs chief Rayimbek Matraimov, has been arrested again – this time over suspicions of money-laundering.

The State Committee for National Security, or GKNB, said on February 18 that Matraimov was being placed in a detention facility for up to 48 hours pending a court ruling on whether he is to remain in custody while further investigations are ongoing.

“The GKNB will inform the public about progress in the investigation of this criminal case in a timely fashion,” the agency said in a statement.

Frankly, though, a lot of the public does not know what to think anymore.

When Matraimov was first arrested in October, the news was greeted with suspicion. It felt implausible that the influential powerbroker would allow himself to be charged with criminal offenses without either brokering some kind of behind-the-scenes agreement or putting up a fight.

Even though Sadyr Japarov, who had only shortly before seized power, had posed to his supporters as a corruption-buster, it was commonly speculated that he would arrive at some accommodation with Matraimov. In the event, Matraimov handed himself in to the GKNB and was treated with uncommon courtesy by its officers.

The events that followed vindicated the cynics.

Matraimov was spared custodial time before facing trial on smuggling charges – in stark contrast with what normally happens to high-profile corruption suspects. The GKNB justified this by explaining that Matraimov had expressed readiness to pay the state an amount of 2 billion som ($24.5 million) to compensate for damage caused through his activities to the country’s coffers. The money was to be paid to the GKNB directly, not the government. Nobody quite knows where the money ended up or whether the entire promised sum was actually coughed up.

Outrage only deepened on February 11, when a court in Bishkek found Matraimov guilty after a cursory, 50-minute trial, only to fine him a pittance of $3,000. In the end, the ex-customs boss emerged from court in a better financial state than he was in when he entered. The same judge ordered that a freeze slapped on assets owned by Matraimov, including apartments in the cities of Bishkek and Osh, his cottage overlooking Issyk-Kul Lake, a Lexus 460 luxury sedan and multiple bank accounts, be lifted.

A few hundred members of the public on February 14 marched through central Bishkek to express their indignation. One held up a sign reading “Raim+Sadyr=Love” – a pithy rejection of President Japarov’s now hollow-looking boasts that his battle on graft would spare nobody, not even Matraimov.

The conundrum now is what has occasioned this latest about-face.

One emerging theory is that Japarov’s team may have grown concerned at the potential political fallout of giving Matraimov an easy ride in a busy season of polls.

Kyrgyzstan will again be heading to the ballot box on April 11 to vote in a referendum to revert to a super-presidential system. If the majority vote in favor – and this outcome looks like a certainty as things now stand – Japarov would come to wield levels of power not seen since the days of former President Kurmanbek Bakiyev, who was deposed in a bloody revolt in 2010.

After that, the country will again vote in a parliamentary election. Under the new-look constitution, the legislature will be even weaker and more beholden to the president than it is at the moment, but Japarov’s team will doubtless want to pack it with its own people all the same.

Matraimov is a distraction they can do without.