The president has preventively denied any future responsibility for accidents that might happen at the mine. 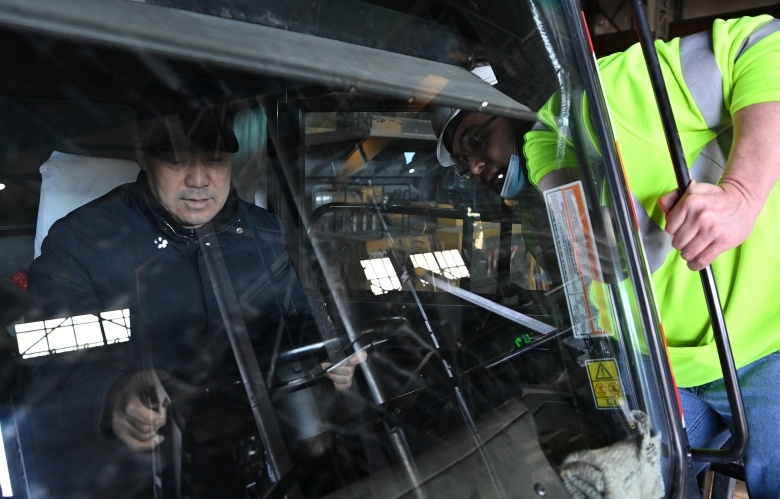 Out of control: President Japarov inspecting machinery during a visit to the Kumtor mine in January 2022. (Photo: Presidential website)

A crack in the pit wall of Kyrgyzstan’s giant Kumtor goldmine is giving authorities a headache, especially since they can no longer blame problems at the national cash cow on a foreign investor.

Or so one would have thought.

Last month, the government created a commission after the Kumtor Gold Company, or KGC, detected fractional movement at one of the pit walls and ordered one-fifth of people working on the mine’s central pit to go on leave. The company also summoned international consultants to offer their input.

KGC has been fully government-owned since a settlement reached with Canada-headquartered Centerra Gold in early April brought a yearslong dispute to a close. President Sadyr Japarov’s administration had one year earlier placed the mine under its own management, in effect wresting it away from the Canadian investors, citing what it said was the urgent need to reverse environmental and safety violations.

In a May 30 interview with state news agency Kabar, however, Japarov appeared both resigned to accidents happening at Kumtor and unwilling to take responsibility for them. A lack of “real specialists” working at the mine from the outset of the project had laid the foundations for repeated worker accidents, he said.

“Disasters will continue to happen. Neither I nor Tengiz Bolturuk are to blame for this,” Japarov told Kabar, referencing his ally, a Canadian-Kyrgyz dual citizen who runs KGC. “When and what will happen, only God knows, do not forget that.”

The last fatal accident at the mine was in 2019, when a waste rock landslide buried two workers. The bodies of the employees were never recovered. Politicians were quick to criticize the foreign company at the time.

Since the millimeter-sized movements of the pit wall were first picked up in the middle of last month, some 40 workers have been taken off the job. KGC’s position is that the problem is neither unprecedented nor critical.

Kalysbek Ryspayev, head of the company’s trade union, suggested in an interview with Eurasianet that the issue had only been identified thanks to devices introduced last year to monitor soil movement around the clock.

“Previously, this was not the case. Experts manually measured the movement with equipment during the day,” Ryspayev said. “Kumtor is in a very complicated geological structure. I would not say something out of the ordinary is happening.”

KGC said in a statement that it had received preliminary assurances from one foreign consultant that the vertical tear in section 20 of the mine, which will deepen and expand in the event of pressure from soil movement, will not reach section 21. Mine boss Bolturuk, meanwhile, has acknowledged that the situation in the affected area of the pit may cause a correction to a previous 17.5-ton gold output target for this year.

Independent industry specialist Duishonbek Kamchybekov has taken a less reassuring line. He told RFE/RL’s Kyrgyz service that any widening in existing cracks could put the whole central pit out of action.

“Perhaps a good result for this year would then be 10 tons of gold extracted instead of 17,” Kamchybekov said. He said the company could in the most negative scenario still focus on sections beyond the central pit, but that those would yield only three tons of gold at best.

Such a major production shortfall would be a huge blow for Kyrgyzstan. Kumtor has accounted for more than one-tenth of the entire economy in recent years.

But it would be better than the kind of massive accident that former Centerra vice president Daniel Desjardins warned of in 2021, just as Centerra was embroiled in a post-seizure grapple with the Kyrgyz authorities.

Referring to photographs and videos shot at the mine, Desjardins said that abnormally large amounts of water had entered the central pit, something he said in an interview to Bloomberg news agency could increase “the threat of a wall failure.”