Bishkek is also angling for yet more room to ease its debt burden. 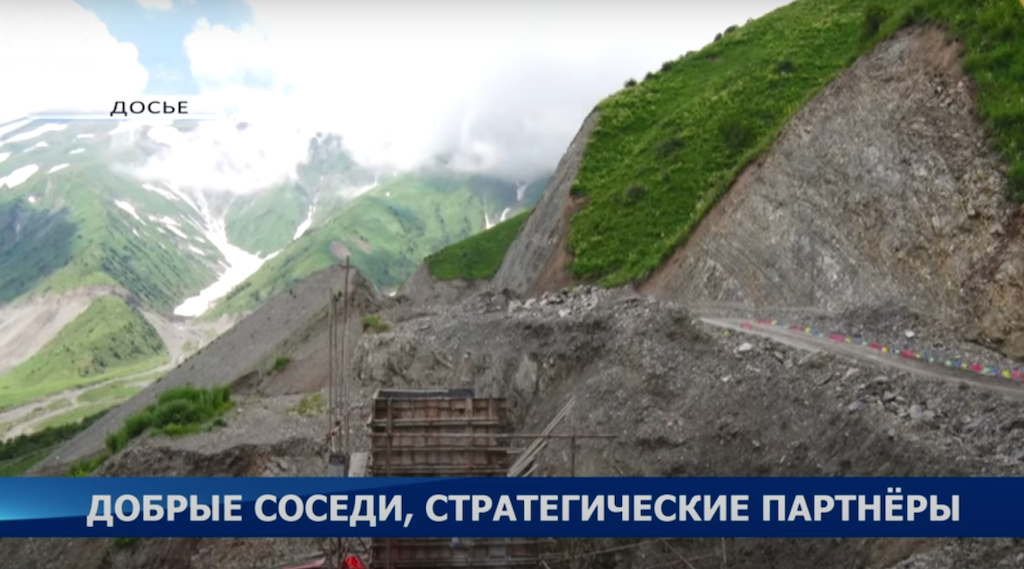 Even as Kyrgyzstan appears uncertain how to cope with the massive weight of its dues to China, it has embarked on a fresh charm offensive to remind Beijing of the role it plays in developing vital infrastructure.

In an interview to China’s state Xinhua news agency published this past weekend, Transport Minister Bakyt Berdaliyev hailed his nation’s eastern neighbor for the work it has done developing roads linking remote parts of the country.

He listed the Bishkek-Naryn-Torugart highway, which runs from the capital to a border crossing 170 kilometers north of the Xinjiang city of Kashgar, and a new north-south road link now under construction as success stories.

The tunnels and flyover bridges built with Chinese investment are unlike anything Kyrgyzstan has seen before, the minister raved.

The praise is not only for the edification of readers of Chinese state media. An eight-minute news report produced by the Kyrgyz government broadcaster under the title “Good neighbors, strategic partners,” dwelled on many similar points and emphasized just how essential Beijing is to Kyrgyzstan.

“China is and always will be a priority partner in Kyrgyzstan's foreign policy. As a true friend and a reliable partner to Kyrgyzstan since the establishment of diplomatic relations, [China] has provided and continues to provide significant assistance in the most difficult times,” Nurlan Suerkulov, director of the Foreign Ministry’s external communications service, told state broadcaster KTRK.

Berdaliyev expressed himself in similarly flowery terms in his interview, talking about how “a close neighbor is better than a distant relative.”

Bishkek is still banking on China coming through with completion of another long-delayed transportation project – namely, the China-Kyrgyzstan-Uzbekistan railroad.

Speaking on the sidelines of the maiden Eurasian Congress, an event organized by the Eurasian Development Bank, which was founded jointly by Russia and Kazakhstan, Kyrgyz Economy Minister Sanjar Mukanbetov said that railway link could be of service to the Moscow-dominated Eurasian Economic Union trading bloc.

“We represent the southernmost border of the EAEU, from where paths are open to China and further, to India and Pakistan,” Mukanbetov was quoted as saying on December 4 by Sputnik news website. “Unfortunately, these giant markets are still not being utilized by Kyrgyzstan to the full extent. This is an opportunity for all EAEU nations, and this is a matter that could be greatly assisted by the China-Kyrgyzstan-Uzbekistan railroad.”

In his remarks to Xinhua, Berdaliyev said hopefully that progress is being made on agreeing on technical issues, such as gauges and locations for transshipment stations.

“But this requires a political decision and, most importantly, the participation not only of the directly interested parties, but also the structures of the EAEU, in particular banks and other development institutions,” he said.

As even the KTRK report is forced to concede, however, all these overtures come just as Kyrgyzstan is having to deal with paying down large loans issued by China.

The Foreign Ministry cited Kazakbayev as impressing upon the ambassador the “importance of offering assistance in the question of easing the pressure of external debt upon the country’s budget in light of the negative effects of the coronavirus infection on the macroeconomic situation.”

As it happens, China has already cut Bishkek some slack. As Nikkei Asia has reported, China provided some of that desired relief in November by allowing the $35 million owed this year to be pushed back to 2022-2024, albeit payable with a 2 percent interest rate. Kyrgyzstan’s overall liabilities before the state-owned Export-Import Bank of China stand at just under $1.8 billion.

The recurrent headaches of Chinese investors in Kyrgyzstan is the elephant in the room, however.

In the wake of the unrest that followed legislative elections on October 4, Chinese businesses were targeted for shakedowns nationwide, at times accompanied by violence.

In some dramatic cases, according to one security contractor, women at the businesses were threatened with rape, men were savagely beaten, and the Chinese flag set alight. On October 6, 35 Chinese executives fled to a hotel in Bishkek, only to be surrounded by an armed mob seeking ransom. Elsewhere, over 100 Chinese workers spent that night in a snowy forest after fleeing a mob that had occupied their mine. The next day, men wielding Kalashnikovs visited the Chinese oil refinery in Kara-Balta demanding a $350,000 protection fee, threatening to set the plant on fire. When hundreds of protesters surrounded the plant, the men with AKs were paid, the source said.

Bishkek fully understands – the nationalistic leanings of the incoming ruling elite notwithstanding – that this will not fly. A roundtable with Chinese investors was held on November 24 with the express purpose of reassuring attendees that the Kyrgyz government is taking measures to provide adequate security to Chinese companies and citizens operating in the country.

At that event, the chairman of the State Industry, Energy and Mining Committee, Jirgalbek Sagynbaev, said making that protection available was especially important in light of the fact that 80 percent of Chinese investment in Kyrgyzstan is in the power, industrial and fuel sectors.

Will this all be enough to charm China?