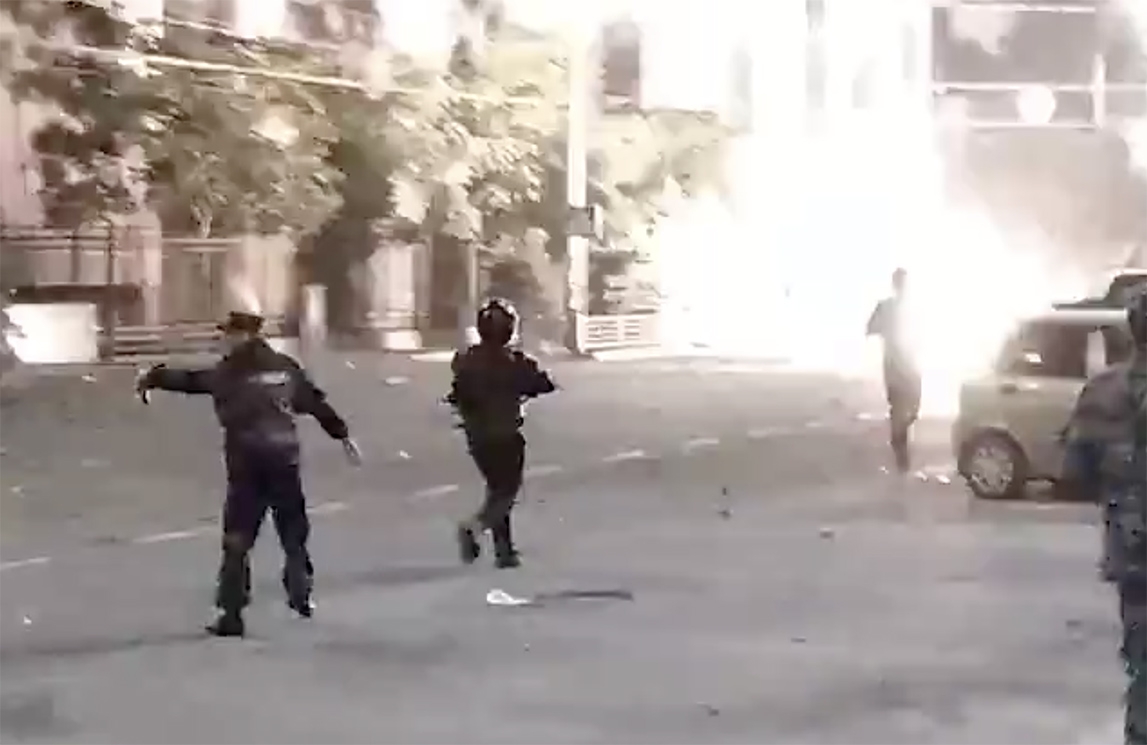 Violence at night. A screenshot from a video distributed by the Reforma party.

Protestors have breached the fence protecting the White House in central Bishkek, home both to parliament and the president's offices, and taken control of the building. Photos published by Azattyk, the Kyrgyz service of RFE/RL, show a man kicking a portrait of the president inside the building.

Riot police in Kyrgyzstan’s capital moved in to break up a major rally sparked by anger over a parliamentary election marred by widespread vote-buying, only to provoke a furious and savage response.

Clashes between law enforcement and demonstrators on Bishkek’s Ala-Too square began on October 5 at around 8:30 p.m. after a group of men attempted to break through the gate to the White House government building. Police used rubber bullets and stun grenades to disperse the demonstrators, some of whom hurled street paving stones in return.

Those confrontations degenerated into pitched and running battles that lasted well beyond midnight. Police fired hundreds of nonlethal rounds at protesters, wounding several opposition politicians in the process. These included representatives of the Ata Meken party, Janar Akayev, Tilek Toktogaziyev and Eldar Abakirov.

The most ferocious contingent within the crowd pelted police with rocks and set fire to garbage dumpsters being used as barricades.

By 1 a.m., large crowds of now-violent throngs had managed to charge back into Ala-Too amid gales of smoke and billowing flames.

Ambulance crews were not spared the aggression earlier in the night. One paramedic was badly injured after being struck with a stone. Her ambulance was stopped by a mob and medics pulled out of the vehicle as they were transporting a wounded person to the hospital.

Yegor Borisov, head of the intensive care unit at Bishkek’s Emergency Medicine Center, wrote on Twitter that at least four ambulance crews had come under attack.

As of midnight, around 120 people – 40 of them law enforcement officials – were admitted to hospitals around Bishkek to treat injuries sustained during the unrest. The Health Ministry reported no fatalities.

Late at night, President Sooronbai Jeenbekov’s office summoned all 16 parties that took part in the weekend’s elections for crisis talks at 11 a.m. on October 6. Around midnight, in apparent recognition of the alarming deterioration of the situation on the streets, those talks were brought forward by two hours.

In another major apparent concession, the Birimdik party, which is closely tied to Jeenbekov and came in second in the much-criticized October 4 vote, pledged that it would appeal for fresh elections. Adilet Sultanaliyev, the spokesman for the party, on Twitter urged all other parties that had passed the 7 percent threshold for entering parliament to do the same.

With the police showing evident difficulty in dealing with the ferocity of unrest in Bishkek, the authorities may be running out of options. And tensions are only likely to worsen unless a breakthrough is reached.

Protestors are counting on fresh reinforcements arriving from the cities of Talas, to the west, and Karakol, which lies on the far side of Issyk-Kul lake, in a suggestion that violence is not likely to abate soon.

The day had begun with relative calm. Although punctuated with angry speeches from political leaders, the antigovernment rallies were notably free of violence. It was only when night descended that moods grew more ominous.

Multiple opposition parties in Kyrgyzstan shut out of parliament in an election marred by widespread and well-documented allegations of voting-buying have mounted a fiery rally of thousands in the center of the capital, Bishkek.

As many as 4,000 supporters of almost a dozen political parties gathered on Ala-Too Square on October 5 to demand a repeat of a vote that has handed a commanding parliamentary majority to a pair of parties closely tied to the ruling order.

The morning began with disaffected parties announcing protest demonstrations at a variety of times and locations. By the early afternoon, however, all the rallies had merged by a tribune near the White House government building, where party representatives urged unity and delivered angry speeches. The crowd periodically broke into chants of “kaira shailoo,” meaning “new elections.”

Smaller rallies unfolded at around the same time in the cities of Talas and Naryn.

By the late afternoon, about 20 busloads of shield-wielding riot police officers and at least one water cannon had been deployed to a square just a few minutes-walk from where the crowd was gradually swelling. At one stage, Elvira Surabaldiyeva, a candidate with the Ata Meken party, appealed to the public to come to the help of rally participants, some of whom had reportedly already begun collecting money to bring food for people vowing to occupy the square. Surabaldiyeva called on the police to refrain from trying to halt the rally.

“Not a single policeman should go against the people. You must defend us and be on our side,” she said.

Deputy Interior Minister Almaz Orozaliyev seemed to indicate that police would not act unless the rally turned violent.

“People have gone to a peaceful meeting, no questions from us. Our job is to maintain public order," Orozaliyev told RFE/RL's Kyrgyz service, Radio Azattyk.

As of 5 p.m. on October 5, a preliminary hand-count from the October 4 vote showed only four parties winning seats in the 120-seat parliament. Birimdik, which is closely aligned to President Sooronbai Jeenbekov, and Mekenim Kyrgyzstan, a party known to be bankrolled by a former top customs official accused of accumulating vast riches through his control of a major smuggling operation, were reported to have got around 22.7 percent and 24.35 percent of the ballots cast, respectively. With more than 9 percent of the vote, the Kyrgyzstan Party, a bland, businessman-focused force that readily aligns with the government of the day, also eased over the 7 percent threshold.

Butun Kyrgyzstan, a nationalist party headed by a one-time senior security official, likewise appeared to have squeezed into parliament. That party had a particularly strong showing among the large diaspora of Kyrgyz remittance laborers in Russia.

The ranks of the disaffected include parties like Ata Meken, which had been widely expected to make it into parliament, Mekenchil, Respublika, Yiman Nuru and Bir Bol. Kadyr Atambayev, the son of jailed former President Almazbek Atambayev who ran for a seat with the Social-Democratic Party of Kyrgyzstan, or SDPK, was among the crowd on Ala-Too. All told, the parties that failed to get into parliament may end up accounting for around one-third of the ballots cast.

Irina Karamushkina, an SDPK candidate, said the elections had been wholly undermined by dirty tricks.

“We do not accept the election results. The internet and media are full of videoclips, audio and various kind of evidence of violations, massive bribery and pressure on voters. We demand the cancellation of the election results,” Karamushkina told the crowd.

Reforma party leader Klara Sooronkulova reprised an oft-repeated call for national unity, a cancellation of election results and the resignation of the president and the government.

“Let Kyrgyzstan be for the young people from this day on. The authorities should be with the people. These asses need to disappear and go,” she said as the crowd replied with cries of “Go! Go! Go!”

As the afternoon wore on, other speakers too broadened their target from the elections alone to the government as a whole. At times, the crowd was whipped up into cries of “Jeenbekov ketsin!” (Jeenbekov go!), reprising a slogan familiar from the uprisings that toppled presidents in 2005 and 2010.

The Organization for Security and Cooperation in Europe’s election-monitoring body echoed claims of vote-buying in its initial assessment of the polls.

“The [Office for Democratic Institutions and Human Rights limited election observation mission] received numerous credible reports from interlocutors throughout the country about instances of vote buying and abuse of administrative resources,” the observers said in their report. “However, most often interlocutors informed the ODIHR LEOM that they had no trust that such cases would be effectively resolved and thus did not file complaints.”

On other points, however, the monitoring mission was more complimentary, praising the “competitive and lively” quality of the campaign and what it described as improved electoral legislation.

Jeenbekov praised the conduct of the elections and omitted any mention of accusations of vote-fixing.

“The head of state emphasized that parliamentary elections have taken place and that the rules were well-known in advance, and that all parties were given equal conditions for running their campaigns,” his office quoted him as saying in a meeting with international vote monitors.

Although voting day itself passed with little incident, it is the alleged shenanigans that took place ahead of the election that are the object of criticism.

The procedure envisioned for voters casting their ballot at a precinct not in their place of residence has proven a particularly powerful source of contention. Around half a million people – a record 14 percent of the total number of eligible voters – applied for the Forma-2 ballot. Independent observers say the figure is that high because well-resourced parties like Birdimik and Mekenim Kyrgyzstan charged their candidates and canvassers in precincts across the country with the job of drumming up votes at all costs.

One method of achieving that end, it is now being alleged, was for party activists to pay voters to apply for a Forma-2 and have them travel to the required precinct. Independent election observers reported multiple cases of voters being bussed around the country, far from their actual place of abode.

“You yourselves saw how many violations there were, how much voter-buying there was, how many were bussed in, and this disease known as Forma-2,” Kursan Asanov, a former top Interior Ministry official whose Butun Kyrgyzstan party is currently actually slated to get into parliament, told the crowd.