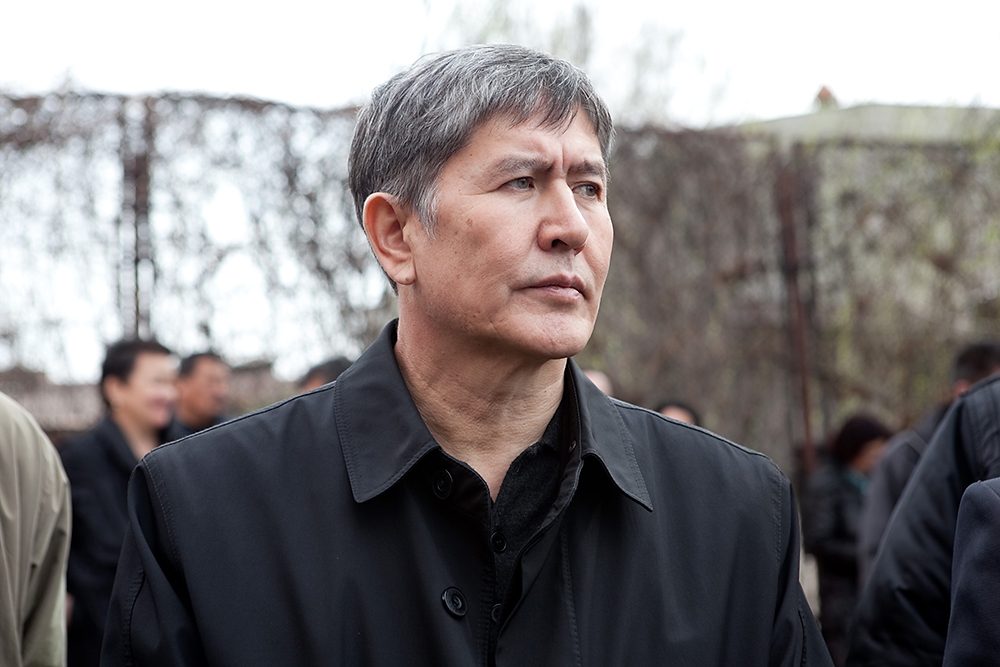 Atambayev continues to steer Kyrgyzstan closer toward Russia and away from the West. (Photo: David Trilling)

With the struggle already underway – and as Kyrgyzstan integrates with its authoritarian neighbors Russia and Kazakhstan in the Eurasian Economic Union – civic groups complain that democratic practices are steadily eroding.

Evidence of backsliding on basic rights in 2014 was abundant -- ranging from populist and Russia-inspired legislation targeting homosexuals and non-profits, through apparent efforts to muffle and co-opt influential media. Lawmakers have been mooting controversial ideas, such as arming civilians in border areas, and calling for economically unfeasible policies. Some have demanded the country’s largest industrial asset, the Kumtor Gold mine, be expropriated; others want families with three babies to receive compensation to the tune of roughly $5,000 per extra baby.

“MPs are in the shop window now,” explained Marat Kazakpaev, a political scientist at Polis Asia, a think-tank in Bishkek. Kazakpaev believes the election law might be changed, making fewer seats available in the future parliament. Such a move would likely intensify competition for parliamentary seats.

In contrast to the general trend in other Central Asian states, Atambayev has agreed to serve only one six-year term. He likewise differs from his predecessors in Kyrgyzstan, both of whom were ousted amid street riots in 2005 and 2010 respectively.

Although seemingly committed to the current constitution, the president has given no indication that he opposes two parliamentary bills which activists insist are unconstitutional: one would punish anyone for sharing a so-called “positive attitude towards non-traditional sexual orientation;” and another would label many NGO representatives as “foreign agents.”

“We see that geopolitically [Western] countries have fewer interests now in Kyrgyzstan, which leaves a kind of imbalance. If before our politicians used to look in the other directions also, now they only look toward Russia,” said Aigul Akmatjanova, director of Transparency International’s Kyrgyzstan office. “Our leadership is weak—financially and politically. There are very few other sources of inspiration [besides Russia].”

Atambayev, said Arkady Gladilov, long-time journalist and editor of the website Politmer.kg, has been unable to shake off his profile as a “revolutionary politician” associated with political impermanence.

“Once the parliamentary race is over at the end of this year, the race for his position in 2017 begins. Almost every politician in this country sees themselves as president,” Gladilov said. “It adds uncertainty.”

Atambayev’s limited powers may explain the gap between rhetoric and results in an ongoing “war against corruption.” Atambayev may also be handicapped by powerful advisors that favor the status quo, some argue.

One recent incident that critics say demonstrates the elite’s allergy toward reform is the dismissal in November of Chingiz Shamshiyev, a young foreign-educated Kyrgyz, from his post as rector at the Academy of Management Under the President, a key institution that trains civil servants.

Shamshiyev attacked corruption at the Academy and sought to update antiquated teaching methods. Yet, according to local press reports, he came under pressure in October for not transitioning the school quickly enough from instruction in Russian to the Kyrgyz language. Shamshiyev, who declined to speak with EurasiaNet.org, reportedly responded that there were not enough qualified staff to teach in Kyrgyz. Later that month Atambayev himself told journalists: “We don’t need these kind of rectors.”

Kazakpaev of Polis Asia blamed Shamshiyev’s dismissal on “old faces in the leadership” of the presidential administration. “They put pressure on young staff, try to gather kompromat [compromising material] on them” to slow reform, he said.

At least one key member of Atambayev’s inner circle, advisor Farid Niyazov, who has appeared in a variety of senior posts since the 1990s, has come under public scrutiny in recent months. Vechernii Bishkek, an influential newspaper, accused him in October of attempting to seize part of its parent company to “cleanse the media space ahead of elections.” Niyazov denied the charge and demanded an apology.

“Overturning the elite is the biggest challenge,” said Kazakpaev. “These people were powerful in the 1990s and still have power now.” Through this election cycle, that elite may see small changes but not big ones.

“The system is ready for change but the politicians and habits stay the same. The resources of the state are too attractive for them to leave voluntarily,” he added.