The games are a Eurasian steppe analog of the Olympics. 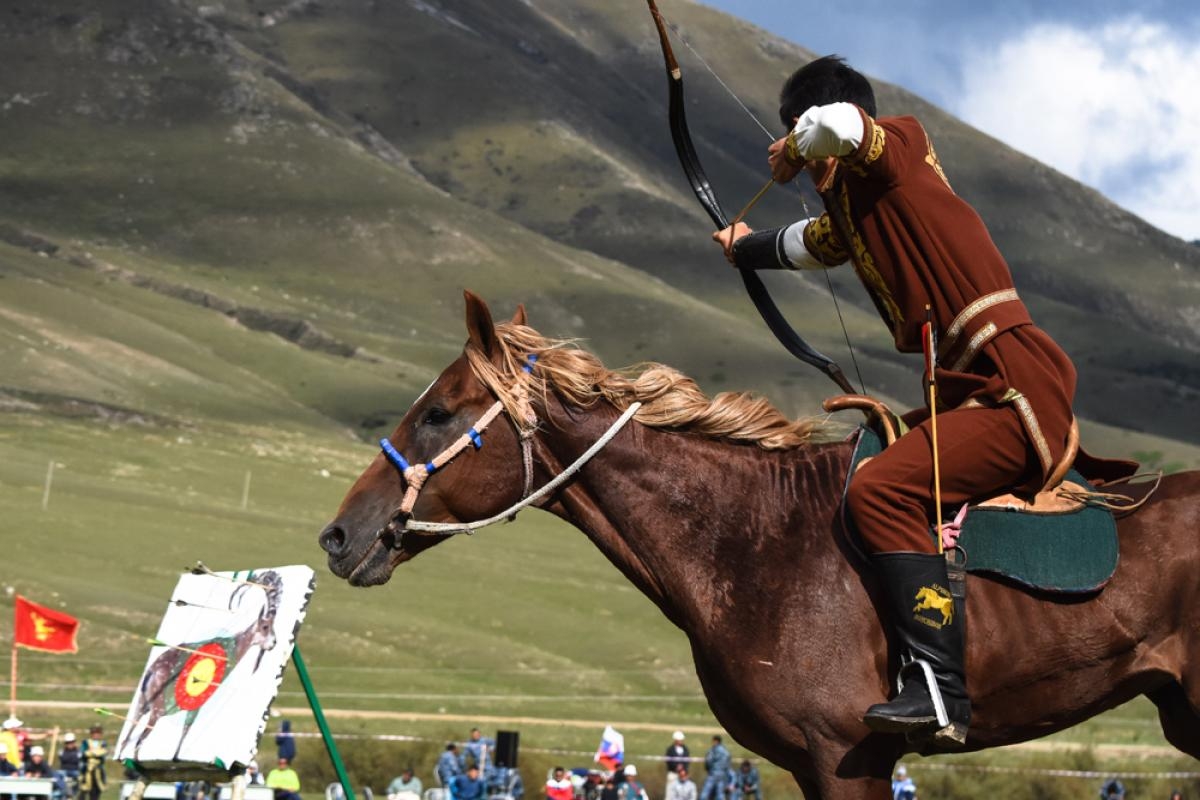 A competitor in Atchan jaa atuu, a traditional form of archery, during the 2016 Nomad Games. (Photo: Vladic Ravich)

For its third time running, Kyrgyzstan is preparing to host the biennial Nomad Games — a kind of Olympics for the Eurasian Steppe.

The event, which begins on September 3, will pit competitors from dozens of countries against one another in familiar sports like archery and wrestling, as well as more exotic events such as Kok-Boru, an analogue of polo played with the headless carcass of a goat.

The games are also serving as backdrop to a different type of tussle altogether, among Kyrgyzstan’s political elite. What matters there is not so much brawn as wits.

Teams are arriving from far afield. Russia is usually represented by teams from its Turkic-speaking republics, while the United Kingdom and the United States are sending along goodwill teams. Singapore is having a shot in the archery category.

The most eagerly awaited contest, however, will be between Kyrgyzstan and Kazakhstan, which are both seen as shoo-in favorites to face off in the Kok-Boru final.

Less predictable is who among Kyrgyzstan’s bigwigs, other than President Sooronbai Jeenbekov, will attend the opening of the games. Jeenbekov and his irascible predecessor, Almazbek Atambayev, have been at loggerheads for months now, so the games would offer an obvious opportunity for a public show of togetherness.

Atambayev has been invited to attend, according to the presidential administration and the Social Democratic Party of Kyrgyzstan, or SPDK, which the former head of state leads.

But such is the bad blood running through the heart of Kyrgyz politics that the SPDK has even been moved to strenuously deny rumors that their leader is plotting a coup.

Given that Atambayev is unlikely to want to play second fiddle at an event he views as part of his own legacy, it seems more probable that Jeenbekov will only be joined by one other ex-president, Atambayev's own predecessor, Roza Otunbayeva.

The other mystery is where the 2020 edition of the Nomad Games is to be held. In the past, Kyrgyzstan has vacillated between the idea of hogging the games all to itself and loaning them out to other Turkic countries every other tournament.

Altynbek Maskutov, who is masterminding the opening and closing ceremonies, has said that hosting rights will be passed on to another country, but he is keeping mum on who that is.

The sensible bet is Turkey, which has long been touted as the games’ next destination. President Recep Tayyip Erdogan will be in the country for a bilateral meeting with Jeenbekov on September 1 and a summit of the Turkic Council on September 3.

As with the other two games, this year’s event has been accompanied by a lively debate about whether or not cash-strapped Kyrgyzstan should even be in the business of hosting costly and lavish sporting events. Naysayers argue that a small, indebted country that looks to China for credit to build basic infrastructure can ill-afford an extravaganza that cost the state budget around $5 million dollars last year — not to speak of the tens of millions of dollars that have been spent on stadia to host key events since 2014.

Member of parliament Dastan Bekeshev recently raised his concerns over the burden shouldered by private sponsors, implying that these contributions were not always wholly voluntary.

On the other hand, the sums involved for the Nomad Games pale in comparison to some of the other vanity projects elsewhere in the region.

If only in terms of the photos and videos that seep into international media, the games are truly a week in the sun for Kyrgyzstan. Then again, after three editions, authorities may feel their showcase event has more than served its purpose.

This article previously said the Nomad Games are biannual. They are biennial.