Japarov and his supporters have shown little compunction in using violence to try and achieve their ends, although the events in Bishkek today easily outstrip anything that has happened in this crisis to date. 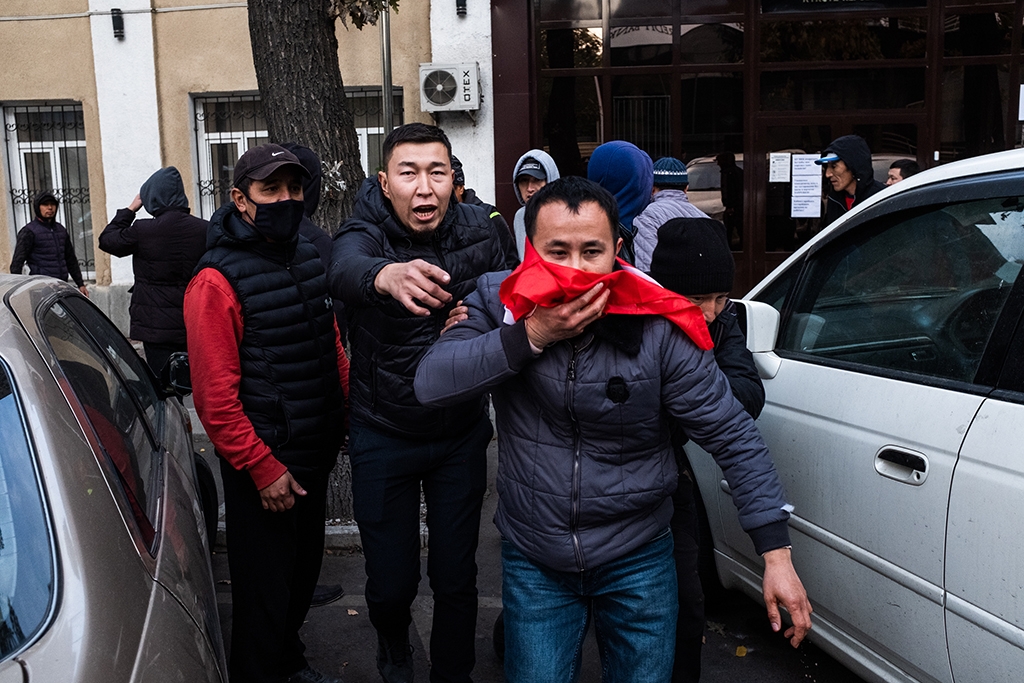 A man holds a Kyrgyz flag up to his face to staunch a bloody wound. (photos by Danil Usmanov)

A convicted kidnapper’s attempt to engineer a seizure of power in Kyrgyzstan by unleashing destructive hordes upon the capital has taken an ominous turn.

Sadyr Japarov’s supporters have assaulted journalists. His mobs broke up a peaceful rally by pelting participants with rocks and bottles. And one of his men attempted to assassinate a political opponent.

In a sign of his alarm at the country’s drift toward total chaos, President Sooronbai Jeenbekov, who has been in hiding ever since wildfire anti-government protests rocked the capital earlier this week, on October 9 ordered the army onto the streets.

All this has sprung out of an abortive effort by government-aligned parties to rig parliamentary elections through a massive vote-buying exercise. That fraud triggered protests, which in turn escalated into rioting so fierce that the crowds were within hours rampaging through the halls of the White House government building and springing convicts from captivity.

One of those men was Japarov, a former MP who proceeded, within hours of his release from prison, where he was serving an 11-and-a-half year sentence in connection with the kidnapping of a regional governor in 2013, to press a remnant of the outgoing parliament into nominating him as prime minister. But not all among the opposition were willing to entertain that notion.

A rival faction on October 7 put forward the candidacy of Tilek Toktogaziyev, a 29-year-old businessman who ran in the elections on the list of the Ata-Meken party. This plan was amended a couple days of later, when Toktogaziyev agreed to be nominated as a number two to Omurbek Babanov, a one-time prime minister and the multimillionaire founder of the Respublika party who ran an energetic but ultimately failed presidential bid in 2017.

The two men stood side by side, and along leading representatives of another two parties, Bir Bol and Reforma, as they revealed their intentions in the congress hall of an upscale hotel resort in southeast Bishkek. As Toktogaziyev told journalists, a leading goal was to quash the peril posed by Japarov. 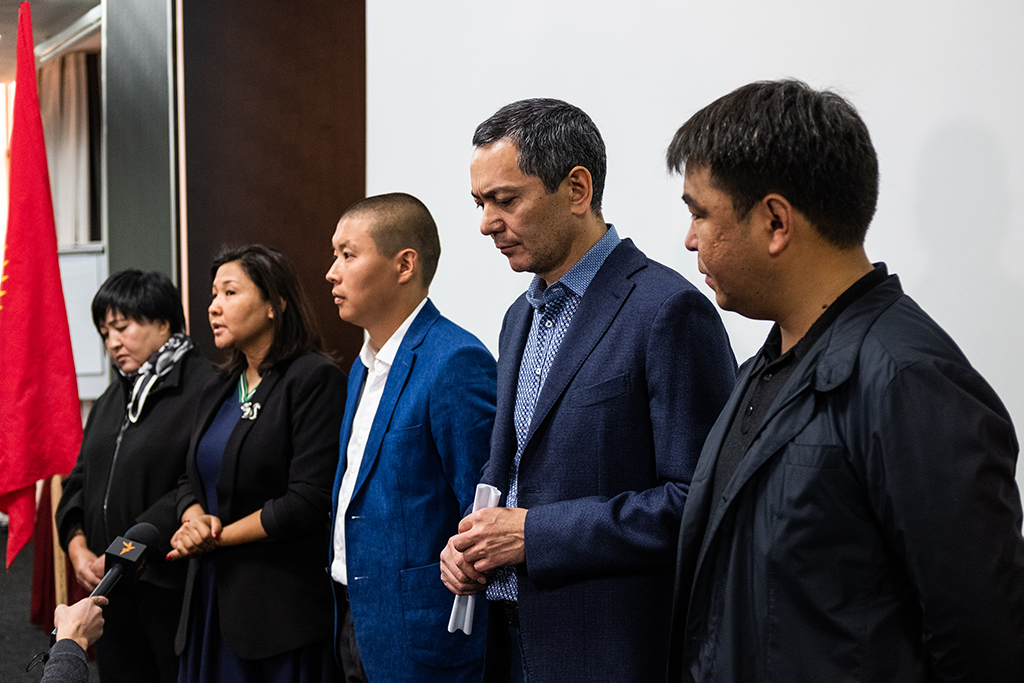 “The actions of organized groups controlled by Sadyr Japarov are causing destabilization and confrontations within society, thereby threatening national security and posing a danger to the country’s statehood,” Toktogaziyev said.

In this climate, however, for such proclamations to have force, they must also be supplemented by a display of street politics. Babanov accordingly announced that several rallies would take place later that day, and that they would converge in the late afternoon on Bishkek’s Ala-Too square.

The assembly held by the statue of Bolshevik leader Mikhail Frunze, in front of the main train station, was specifically centered on anti-corruption and anti-organized crime themes. The attendees were in the main youthful members of Bishkek’s small liberal class. Babanov gathered his followers in the carpark of a shopping and leisure mall.

A third rally was the wildcard. This was summoned at a building called as the Forum, which has long been known as the base of operations for Almazbek Atambayev, a former president. Babanov joined the Forum rally after his own was completed. 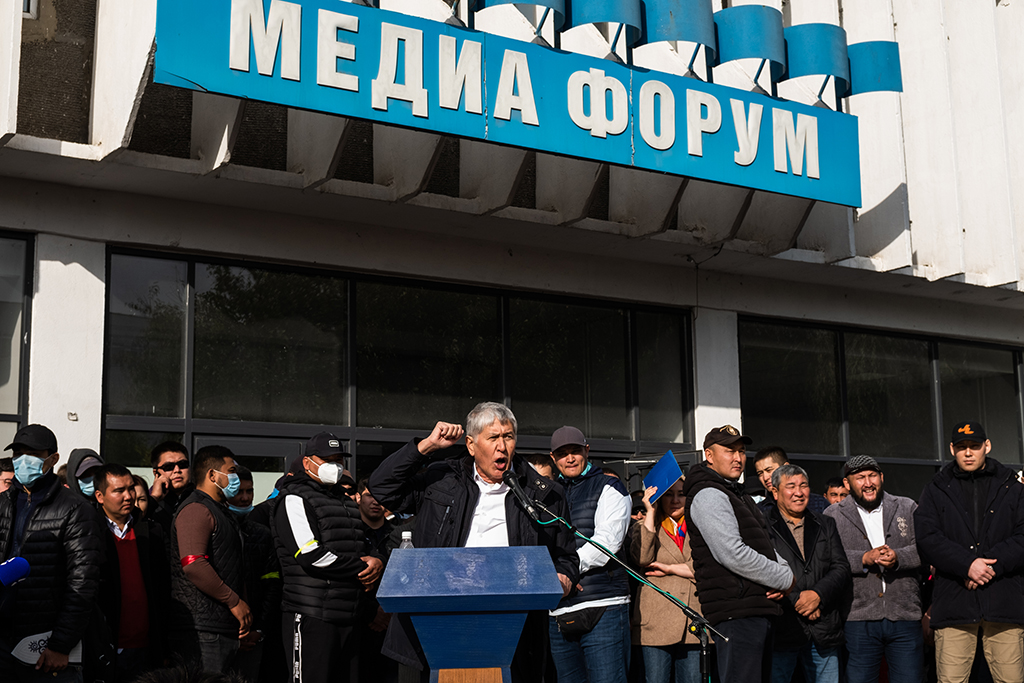 The spectacle of Atambayev and Babanov together is one of the more remarkable developments of this season of Kyrgyz politics. It was Atambayev who, before completing his single permitted six-year term, handpicked Jeenbekov to be his successor. Atambayev then placed his thumb heavily of the scales of the 2017 election to ensure Babanov was knocked out in the first round of voting.

He did that in part by allowing the State Committee for National Security, or GKNB, to open a formal, if utterly spurious, investigation into a Babanov speech that purportedly sowed ethnic resentments between majority Kyrgyz and minority Uzbek communities. After losing the election, Babanov announced he was ditching politics and fled the country out of fear of prosecution.

It did Atambayev little good. Jeenbekov would later turn on his mentor and eventually imprison him. In fact, Atambayev was one of the people released from captivity, from a GKNB cell, as irony would have it, in the nighttime unrest of October 5-6.

In the interests of thwarting Japarov, all that history was set to one side. And so, they, together with hundreds of followers waving the bright red flag of Kyrgyzstan, embarked on a five-kilometer march to Ala-Too. Rally agitators on the back of a truck leading the way roused the walkers into chants of “Jeenbekov leave!” and “Sooronbai, bye-bye!”

One more object of this march’s animus, other than Japarov, was the always-shadowy presence of Rayimbek Matraimov, a little-seen former top customs official who has spent lavishly, with money he is alleged to have accumulated from overseeing a major smuggling operation, on funding pliable political parties. Matraimov is the bogeyman that politicians and activists use to explain all Kyrgyzstan’s evils. So it is suggested, for example, that he is among those ultimately pulling Japarov’s strings.

Another figure said to stand behind Japarov is Kamchybek Kolbayev, who is described by the U.S. government as “the leader of a notorious crime syndicate based in Central Asia.” Kolbayev is understood to live freely in Kyrgyzstan – something he is able to do after being released from prison in 2014 after serving a year-and-a-half of a five-and-a-half-year sentence.

Once the crowd led by Atambayev and Babanov had reached Ala-Too square, it had swelled to include many hundreds of people. Both the men, and many other newfound allies alike, stood bunched and smiling on a podium, as the audience waved dozens of Kyrgyz flags. 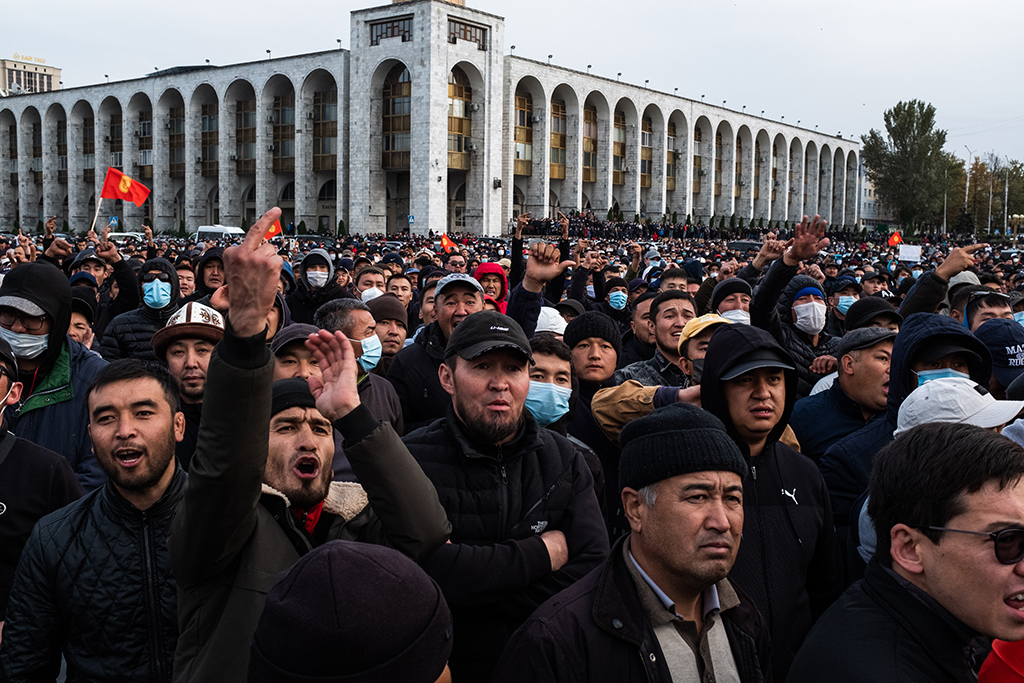 The speeches were partly devoted to pressing political affairs, but it was mostly patriotic fare. One speaker broke into a hoarse rendition of the national anthem and was rapturously applauded for his efforts.

At times, though, a menacing noise of powerful shouting wafted in from another rally a few hundred yards to the north, where Japarov’s supporters have been gathering for days on end. Earlier in the day, a group of them attacked a TV reporter, apparently in a response to a complaint from Japarov that his name was being blackened by the media. Other journalists were intimidated.

The assault on the Ala-Too meeting was sudden and ferocious. Stones and bottles were thrown with abandon. Toktogaziyev was struck on the head with a rock and had to be hospitalized for critical care. The bodyguard of another politician was severely beaten.

Several of the politicians had to barge through a gauntlet of fists and stick-wielding attackers before managing to climb into waiting cars. One man rushed to intercept a Mercedes S-Class car carrying Atambayev and fired several rounds at it from a pistol. Although the bullets damaged the body of the vehicle, none hit any of the passengers.

This chilling turn of events may in some way vindicate a decision taken just a little earlier by President Jeenbekov to impose a state of emergency in Bishkek. The decree is to take effect from October 10. The emergency regime will impose a nightly curfew and strict restrictions on people’s movements. Rallies are also to be forbidden until October 21.

Evidence emerged a few hours after dark had fallen that troops were being dispatched to the city. And then sometime after midnight, the vehicles carrying special forces troops with the Scorpion brigade had pulled up on Ala-Too.

That, for now, may have bought the city some quiet.