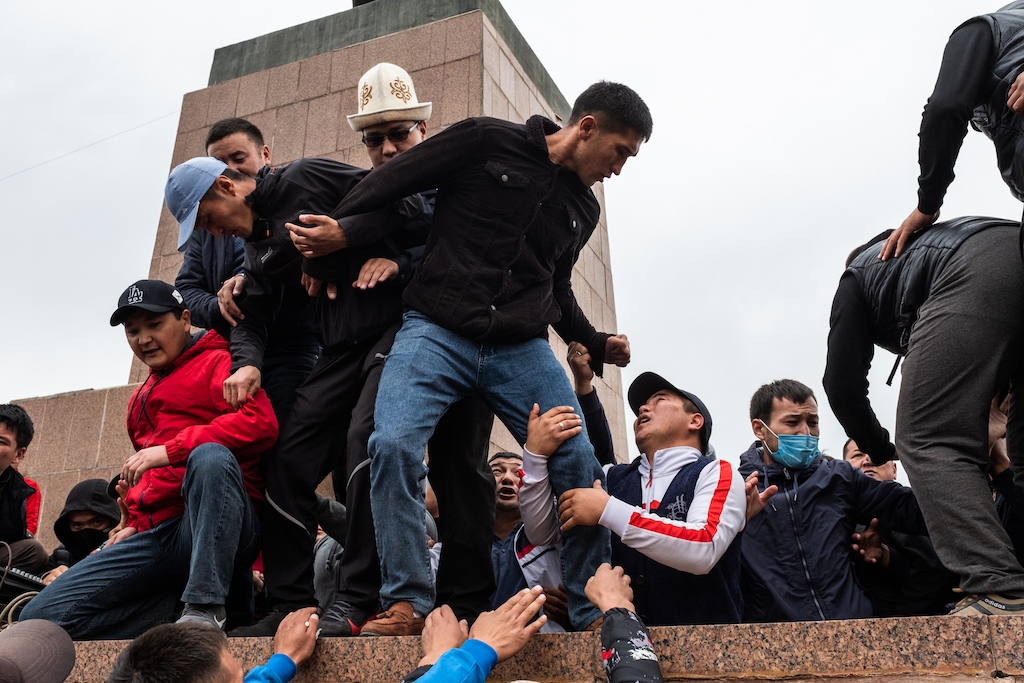 Grab for power: Demonstrators in the city of Osh, Kyrgyzstan. (photos by Danil Usmanov)

Opposition forces in Kyrgyzstan were stunningly rapid in seizing key government buildings, something that happened hours after police attempted to break up a protest rally, but they are proving less enthused about taking over a country deep in the throes of instability and economic crisis.

Meanwhile, President Sooronbai Jeenbekov, who fled the premises of the White House government headquarters in downtown Bishkek in the early hours of October 6, emerged only briefly to make a video statement calling for calm. His precise whereabouts were unclear.

His claim to wield power over the country looked paper thin, however.

Not that anybody was in any rush to replace him. As day broke, people came forward and essentially self-appointed themselves to some important state ranks.

Almambet Shykmamatov, a candidate with the Bir Bol party, announced to the media that he was the acting General Prosecutor. Nobody quite knows who gave him the authority to claim that title. Toward the middle of the morning, a large crowd headed to the offices of the General Prosecutor, apparently to take issue with his appointment.

Shykmamatov then rowed back his claim to the prosecutor’s job.

It was announced instead that another man, Syimyk Zhapykeyev, the leader of the Chon Kazat party, would do the job instead.

When Kurmanbek Bakiyev was toppled as president on April 7, 2010, his foes were quick to form an interim government within the day. Nothing like that has happened on this occasion – not least since nobody knows if Jeenbekov has truly been overthrown.

Instead, a group of leaders of political parties – including Ata Meken, Respublika, Butun Kyrgyzstan, Bir Bol, Zamandash, and the Social Democratic Party of Kyrgyzstan – instituted something called a Coordinating Council.

Butun Kyrgyzstan leader Adakhan Madumarov, a relic of the Bakiyev regime, was named head of that body.

“Today, the most unpleasant thing is to be responsible for something. They proposed my candidacy and I will in turn do everything in my power to stabilize the situation,” Madumarov was quoted as saying.

Madumarov said he had not yet spoken with Jeenbekov.

“We do not even know where this man is,” he was quoted as saying by RFE/RL’s Kyrgyz service, Radio Azattyk.

The power vacuum is causing uncertainty in the regions too. Most attention will be concentrated on the southern regions of Kyrgyzstan. It is there where most informal influence is wielded by Jeenbekov, but perhaps even more importantly, Rayimbek Matraimov, a wealthy former top customs official who is said to have bankrolled Mekenim Kyrgyzstan, the party that performed most strongly in the now-discredited October 4 parliamentary elections.

Many hundreds flocked to the square in front of the mayor and governor’s office in Osh, Kyrgyzstan’s second-largest city, to get a sense of where the wind is blowing. One of the first to speak to the crowd from the tribune at the foot of a giant Vladimir Lenin statue was Jeenbekov’s brother, Asylbek.

“Sooronbai Sharipovich [Jeenbekov], who was elected by the people, remained in the White House until the very end. He is in Bishkek, he has not escaped anywhere, he is the legitimate president,” Asylbek Jeenbekov said. 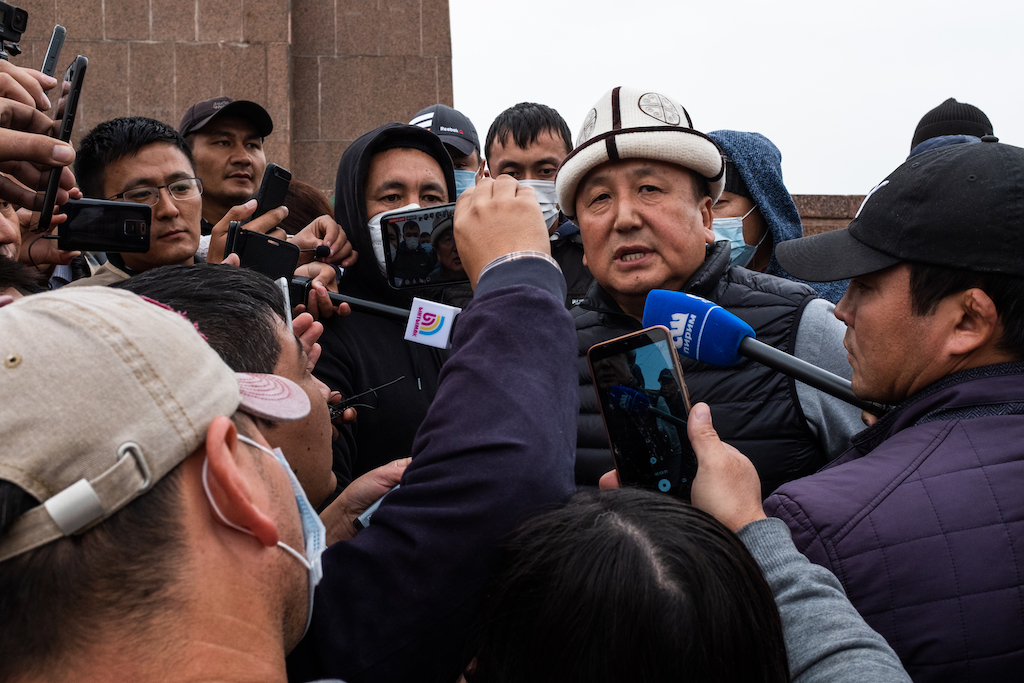 Speaking afterward to Eurasianet, Asylbek Jeenbekov said he regretted that opposition parties had failed to give election officials more time to review the legitimacy of a contested vote that saw his own party, Birimdik, take a commanding control of parliament together with Mekenim Kyrgyzstan. Opposition parties say that outcome was only achieved through a gargantuan exercise in vote-buying.

Once Jeenbekov left the square, though, the speakers that remained behind turned to more local matters. Namely, which mayor they wanted to take over the city. 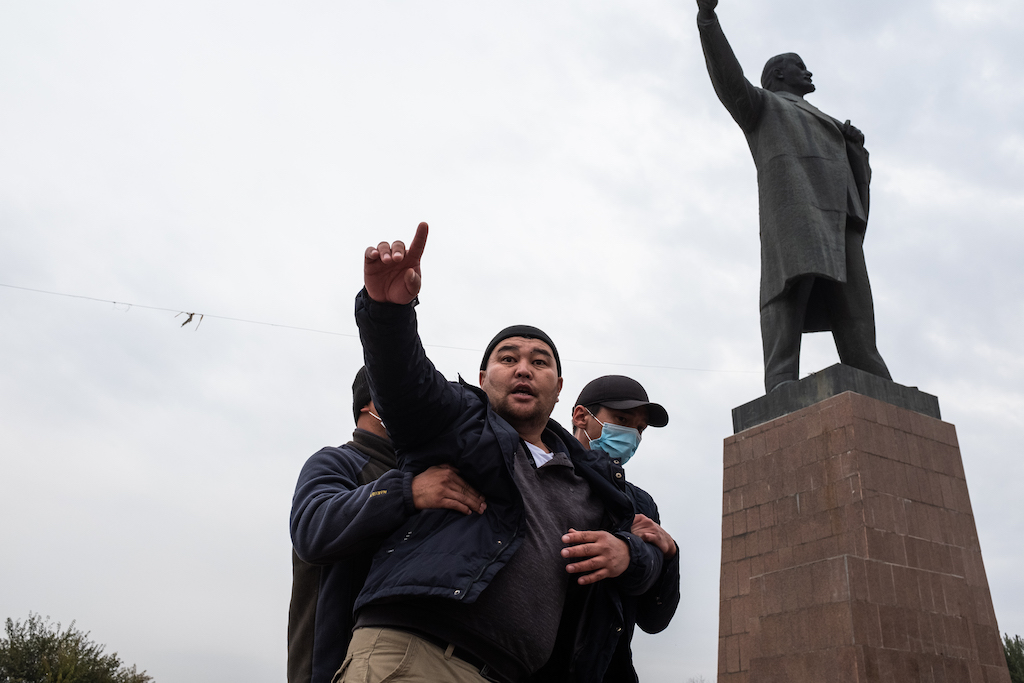 With the help of his burly supporters, the incumbent, Taalaibek Sarybashev, pushed his way onto the stage to make a pitch for keeping his job. After delivering a few words about the need for unity, he was drowned out by heckling from the crowd. And then Sarybashev quickly fled the scene after some men huddled around him began calling for him to be beaten up.

The overwhelming consensus on the square was for Melisbek Myrzakmatov, who ran Osh from April 2010 to December 2013. That period included a surge of bloody ethnic unrest in the city in June 2010 that claimed the lives of around 400 members of the minority ethnic Uzbek community. Myrzakmatov is widely believed to have turned a blind eye to that violence, or even to have directly encouraged it himself.

The only problem is that Myrzakmatov is currently based in Turkey and the object of a seven-year prison sentence in absentia on charges of abuse of office.

Little heed was paid among the Osh gathering to Jeenbekov’s fate. One middle-aged woman grabbed the microphone at one stage to shout “Jeenbekov ketsin,” or “Jeenbekov leave!” Her cries were mostly met with indifference. Two young women turned up after lunchtime with handwritten signs also calling for the president to step aside. They were briefly harassed but then left alone to continue their lonely stand. 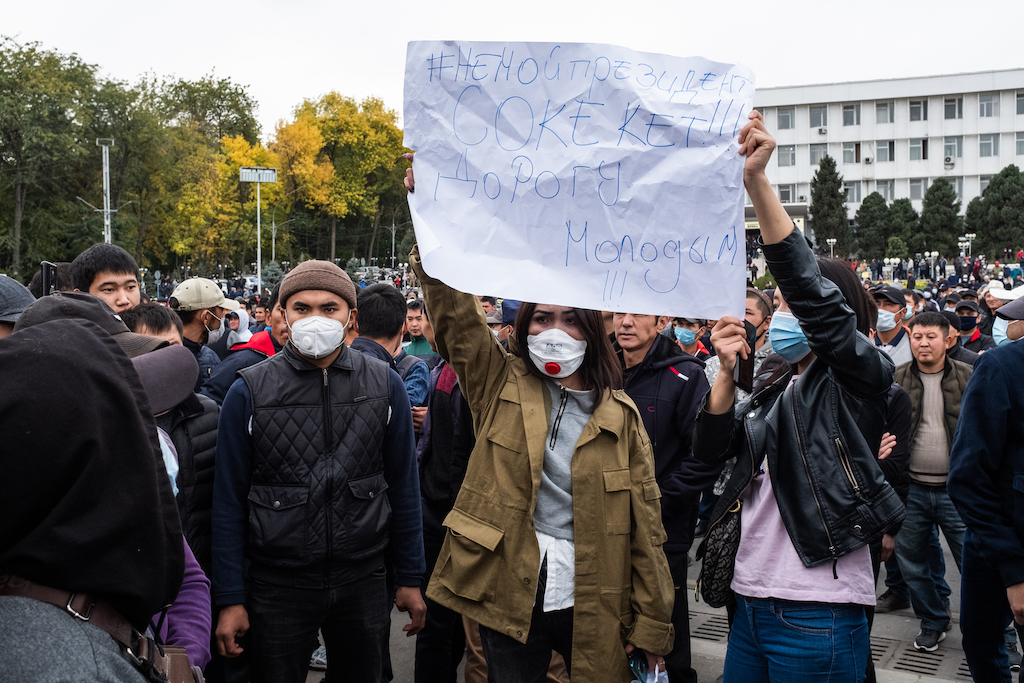 Another emerging theme of this uprising has been the liberation of imprisoned former apparatchiks. Their ranks grew steadily throughout the day. First it was the turn of ex-President Almazbek Atambayev, who was sprung from a cell in the headquarters of the State Committee for National Security. Then followed former member of parliament Sadyr Japarov. Another was Sapar Isakov, an ex-prime minister and Atambayev loyalist jailed shortly after Jeenbekov came to power. After lunchtime, it was the turn of a former Bishkek mayor, Albek Ibraimov, to come out of prison. All were variously either serving sentences or are awaiting trials on charges of kidnapping, attempting to seize power, abuse of office or corruption.

One thing that is clear is that Kyrgyzstan will before long have to return to the ballot box. The Central Elections Commission announced on October 6 that it was invalidated the results of this weekend’s vote.

“This has been done in consideration of the political situation in the country,” said election commission member Kairat Osmonaliev said.