The extractive industry in Kyrgyzstan has become a byword for corruption and health hazards. 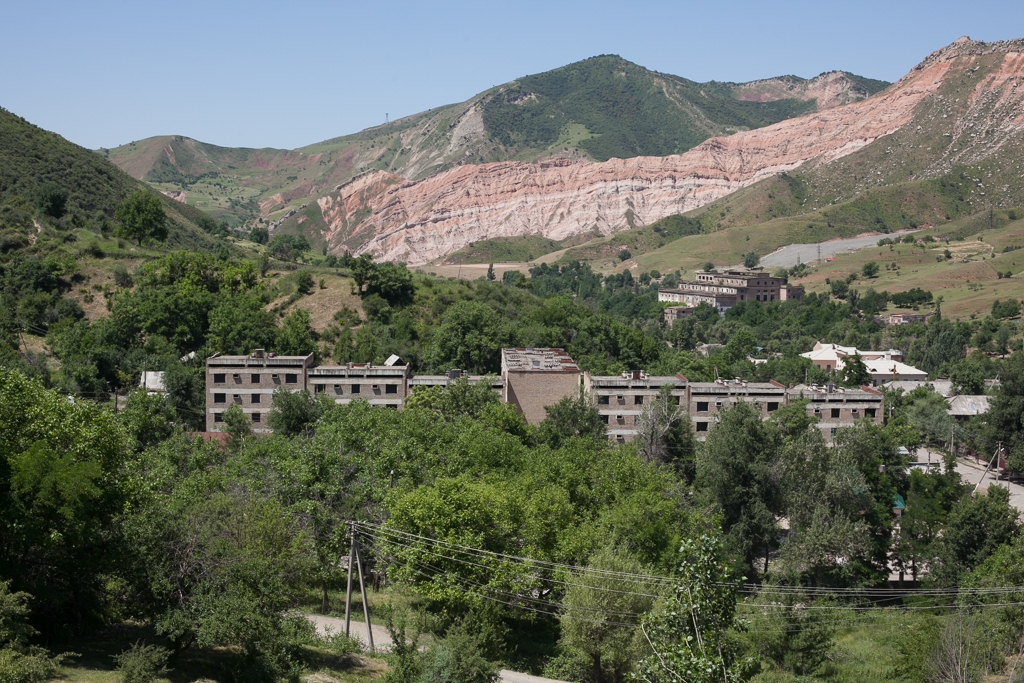 The Soviet legacy at mine sites like Mailuu-Suu, where cancer rates are far above the national average, is one reason uranium mining is so unpopular in Kyrgyzstan. (photo: David Trilling)

Kyrgyzstan’s parliament is preparing to pass a lengthy moratorium on uranium mining – kowtowing to public opinion in a way that will deepen foreign investors’ concerns.

On May 7 lawmakers discussed legislation that will set parameters of the ban on uranium mining that they had imposed at the beginning of the month.

The exact scope of the legislation is unclear but it is almost certain the ban will be nationwide and may also include thorium, another radioactive metal. It will likely last decades, if not longer.

The trigger for this move was a series of protests both in Issyk-Kul province, where a Russian company was beginning work on a uranium mine, and Bishkek, the capital. The persistence and diversity of these hundreds-strong demonstrations have spooked authorities.

The extractive industry in Kyrgyzstan has become a byword for corruption and health hazards. In Soviet times, Kyrgyzstan produced vast amounts of uranium for Moscow’s weapons and energy programs. Workers’ well-being was not a priority. Tens of thousands of people still live in despoiled mountain valleys where they suffer unexplained illnesses, often without doctors or outside support. And since independence, mining has been plagued by concerns about corruption and pollution.

Villagers close to mine sites describe helplessness and anger. In Bishkek, meanwhile, the weak government is afraid to make unpopular decisions.

On May 4, President Sooronbai Jeenbekov backed a uranium ban, which would affect about a dozen projects around the mountainous nation.

“We must pass onto the next generation a unified society, the rule of law,” Jeenbekov’s office quoted him as saying during a meeting with constitutional judges where he decried licensing in the extractive sector as “mired in corruption.”

“We are obliged to preserve for the next generations a pure, green nature. […] I will say without doubt – there will be no extraction of uranium in Kyrgyzstan!”

The waste left by Soviet-era uranium mines still poses risks to local populations and the broader region, despite some cleanup work supported by the World Bank and other international organizations.

Given this poisonous legacy, and with doubts over whether foreign investors will cleanup once they’re done, doubts over uranium extraction are natural.

But the government had already enthusiastically endorsed the activities of one foreign-owned miner, the UrAsia in Kyrgyzstan company, whose mining plans in Issyk-Kul sparked the protests.

During a visit in September to an ore processing plant in the city of Kara-Balta that is majority-owned by a Russian company, for instance, Prime Minister Mukhammedkaliy Abylgaziyev talked up the importance of “building full production cycles” in Kyrgyzstan.

That plant, which was slated to process uranium from UrAsia’s mine in Issyk-Kul, was an “important example” of such an approach, Abylgaziyev said.

Abylgaziyev’s deputy, Kubatbek Boronov, has insisted UrAsia is not planning legal action against the government over the de facto expropriation of the company’s $3 million investment. But the company itself has not commented publicly.

It is not clear if other jilted license-holders have made comparable commitments.

How the May 7 parliamentary hearing unfolded suggests that authorities succumbed to a knee-jerk impulse.

Experts and lobbyists attending the session to explain their opposition to the ban complainedthat they were not allowed to speak or were interrupted by lawmakers.

They left the session early. The Chamber of Commerce and Industry advocacy group meanwhile, strongly criticized the ban, noting that Kyrgyzstan can ill-afford to stymie potential inflows into the state budget with Chinese loans due for repayment next year.

State geological experts, perhaps mindful of their jobs, were inclined to softer criticism.

One such expert, Kushbakali Tajibayev of the National Academy of Sciences, noted that the new law could thwart investments in valuable rare-earth metals, which are often found near uranium deposits.

Arguing that technological progress will make mining safer in the coming years, Tajibayevbegged lawmakers to limit the ban to 50 years at most.