Kyrgyzstan: Preparing in fear for the next border flare-up

Kyrgyz villagers on the border with Tajikistan are growing accustomed to regular shoot-outs, and not expecting help from their government. 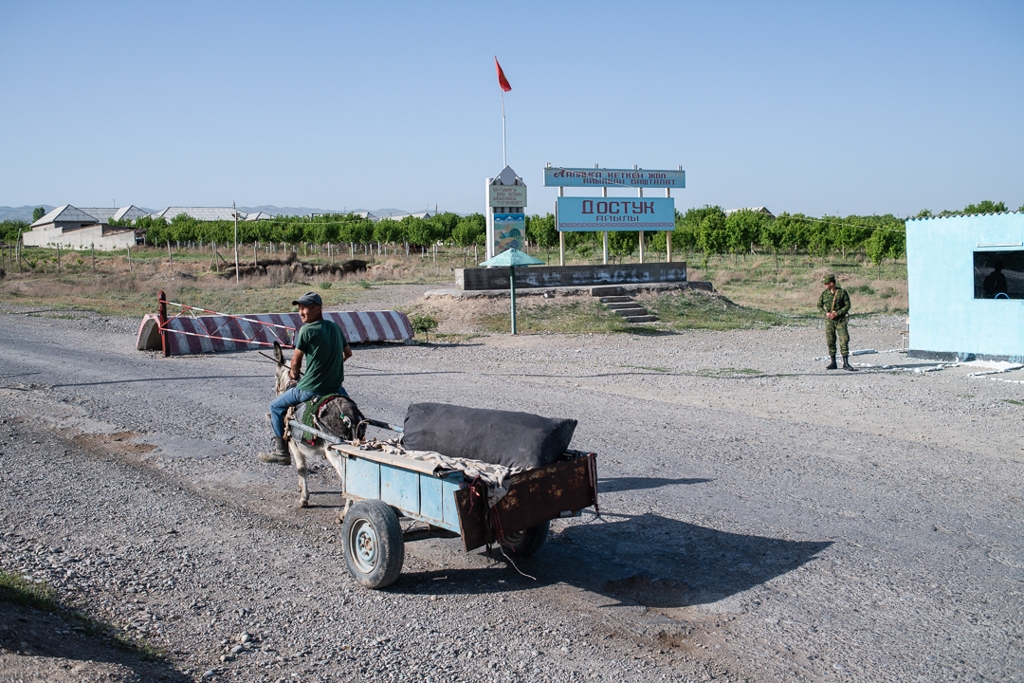 Kimzhan Niyazmatov was at a gathering with the presidential plenipotentiary to Kyrgyzstan’s Batken region at an assembly hall in the village of Borborduk on the evening of April 12 when a border service official rushed in. The officer urgently whispered into the plenipotentiary’s ear.

There had been an incident on the border with Tajikistan, the audience was told. It was time to leave.

Rather than head straight home, villagers went to the mosque in the adjacent settlement of Dostuk to perform their evening prayers. That was when the shells started raining down.

The Kyrgyz border service provided a bulletin several hours later. There had been a shootout between Kyrgyz and Tajik troops in an out-of-the-way location somewhere along the contested border. This happens routinely now. Senior officers went to the scene to negotiate, only for another bout of shooting to ensue. There were injuries on both sides.

Kyrgyz officials say that after the second round of firing, the Tajiks began lobbing shells in the direction of Dostuk, which is, along with Borborduk, one of several villages in the Jany-Jer district. 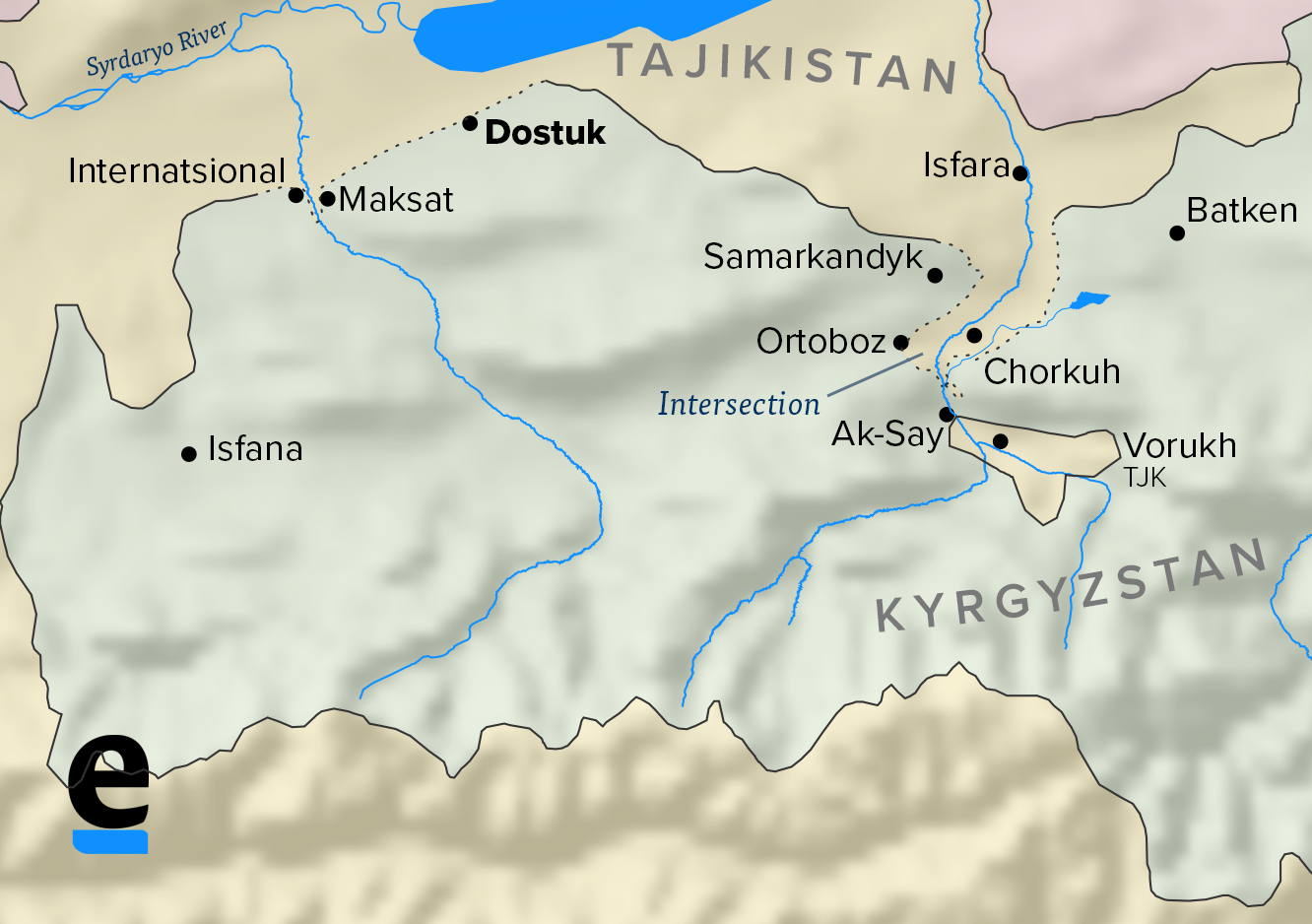 Tajikistan, as is customary, provided a mirror version of events, pinning all the blame on Kyrgyzstan. There are no independent monitors on the ground to mediate or offer independent accounts in such situations.

Niyazmatov, who is 62 years old and sits on the Jany-Jer aiyl-okmotu, the rural council, was at the Dostuk mosque when the explosions started. It was only after the third nearby blast that he and his fellow worshippers decided to break off their prayers.

“May God forgive us, but we need to protect our families,” said one worshipper.

Back at home, Niyazmatov installed a wooden plank to protect a newly installed glass door from a possible blast. It was as he was doing this, that a shell fell into his garden, he said. 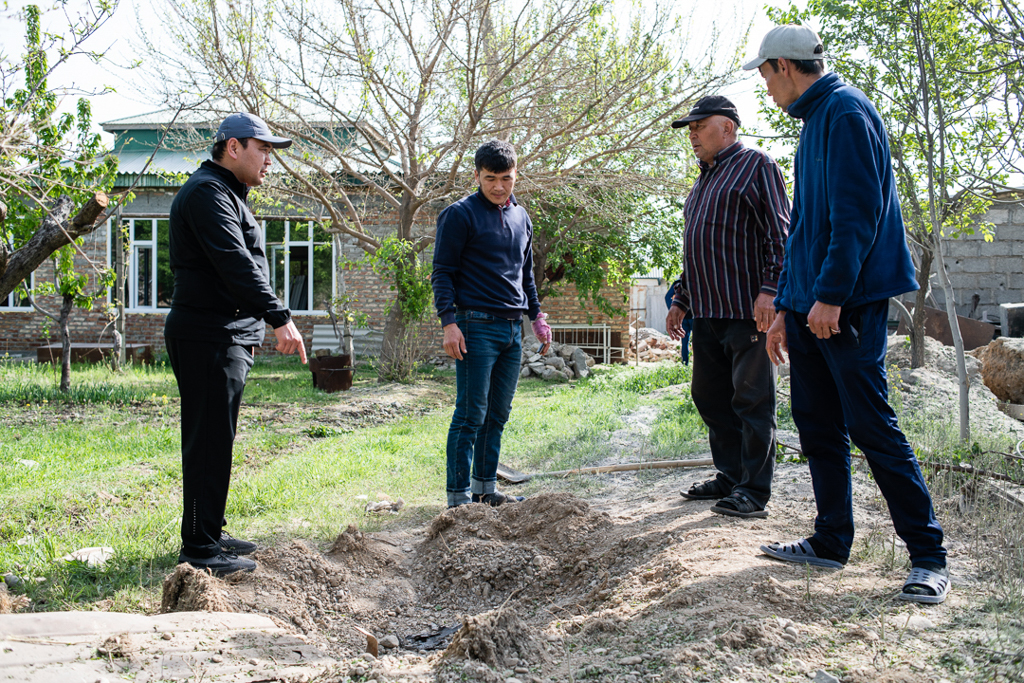 Households began preparing to escape to Margun, a village up in the hills some way from the border. Some later said that the shelling was also directed toward the mountains. One cattle herder told Eurasianet that he came across a crater left by a projectile while out tending to his animals.

Not everybody had the wherewithal to evacuate quickly, however. Several cars loaded with fleeing families ran out of gas on the road toward Margun, causing snarls along the narrow country road. 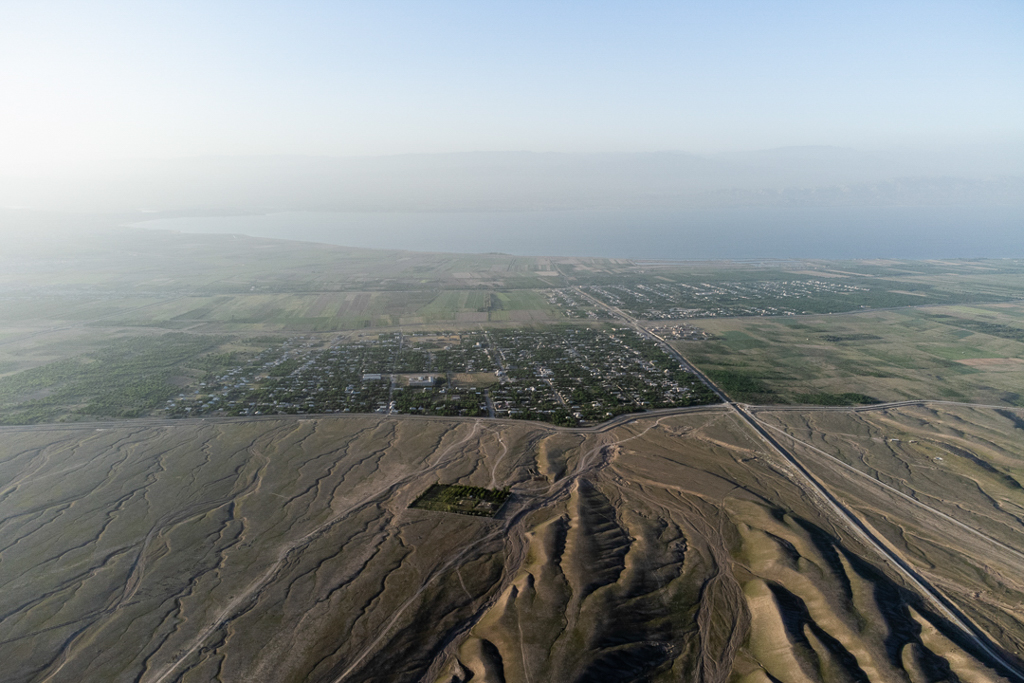 By 3 p.m. on April 13, senior regional officials from both sides of the border were meeting to finally talk their way out of the escalating tension. The plenipotentiary for the Batken region and the governor of Tajikistan’s Sughd region, as well as border guard chiefs from both countries, met at a checkpoint on the road straddling the undefined frontier. This encounter produced mutual pledges to pull back forces and order troops back to their barracks. 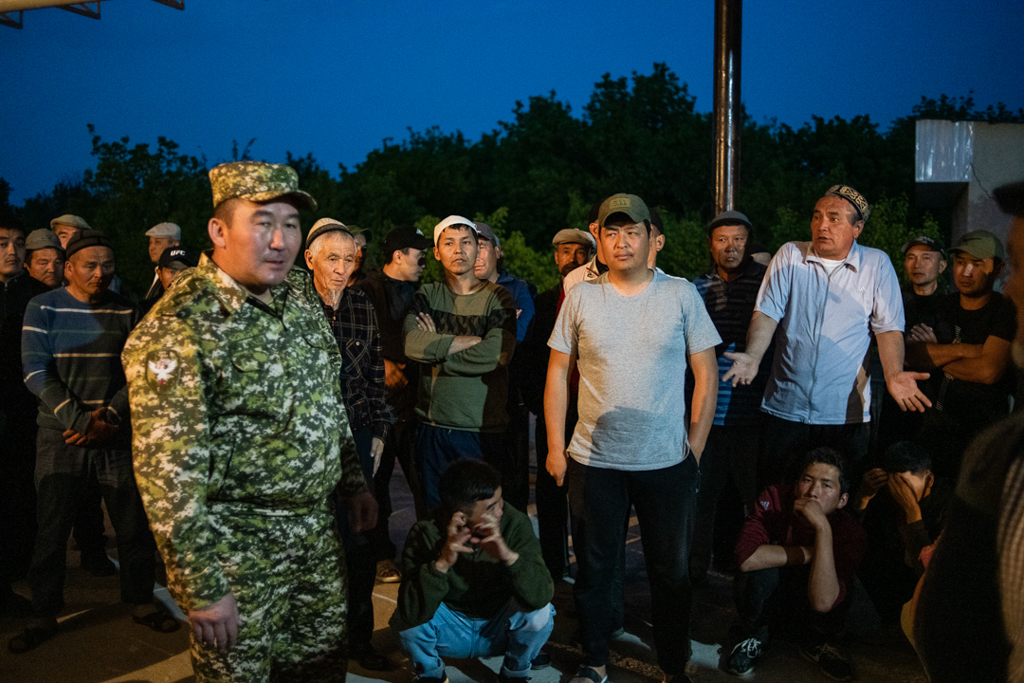 The first returnees to Dostuk started arriving within the day. Some went to Niyazmatov’s house to inspect the damage. One shell that landed in his garden tore through his front gate and struck the house across the road.

All things considered, the village got off lightly. Most of the projectiles either fell into gardens or floated over roofs and plunged into the hillside. One girl was struck in the knee by shrapnel. Another man was hit in the buttocks.

Villagers are nevertheless preparing for a possible repeat occurrence. The most important thing is to have enough gas to get away. But doing this has become complicated because all the Kyrgyz-owned gas stations in the area were burned down during an earlier and larger wave of border unrest in April 2021. The road all those gas stations stood on is a curious anomaly. It lies slap on the unmarked border and is used by Tajiks and Kyrgyz alike. Tajik motorists used to come and buy cheap Kyrgyz gas, which was technically illegal, since the drivers were in effect crossing an invisible state border. The Kyrgyz government has forbidden those gas stations from being rebuilt.

That means that gas is now sold in a primitive fashion, from jerry cans out of the homes of some enterprising local businesspeople. On the day after this latest surge of unrest, a sizeable line had formed at one house selling gas. 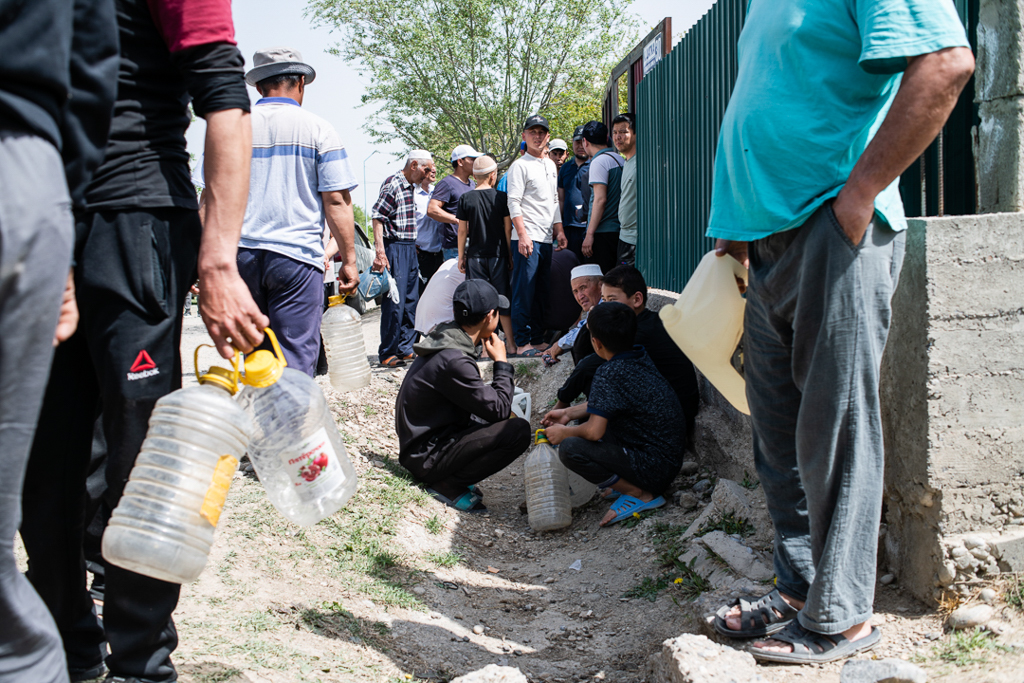 “I’ve put a canister of gasoline in the basement. If I need to leave urgently, I can refuel [the car] and leave,” one man told Eurasianet.

In the holy month of Ramadan, it is customary for people in Dostuk, as in villages across the country, to gather in the evening at the mosque for the breaking of the fast. But few congregated on April 13. Thoughts had turned to preparing to depart again for villages further away from the border amid rumors that more trouble was expected. Interior Ministry and border service representatives volunteered assurances that negotiations to restore complete calm were still ongoing. One person responded only to complain the government needed to improve the road to Margun – so that people could escape faster if the need arose. 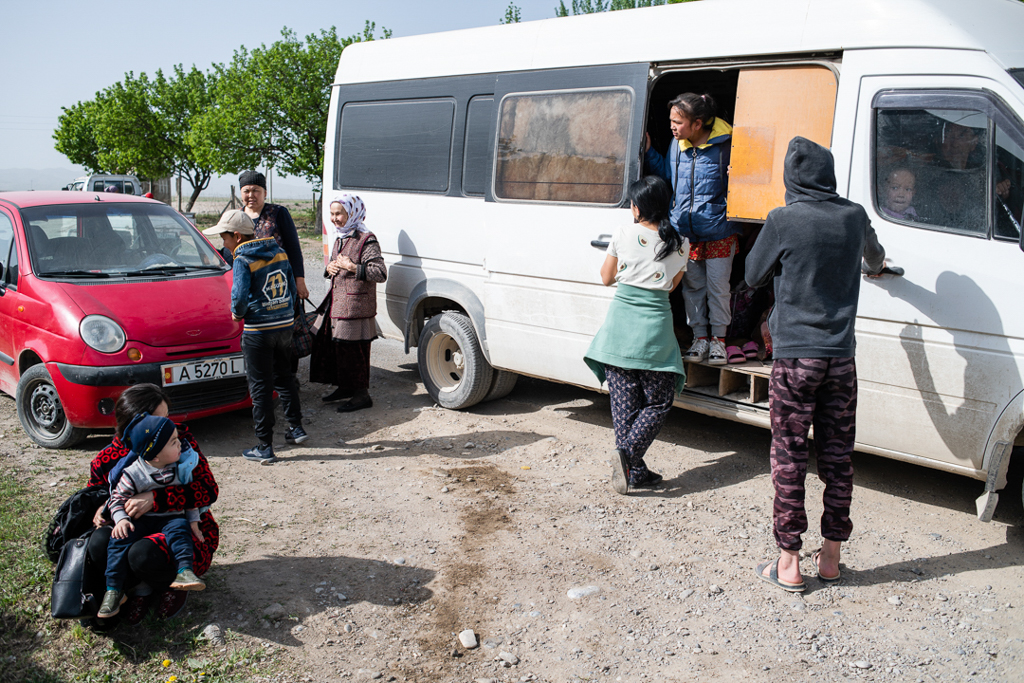 Niyazmatov spent that night alone at home. He dispatched his family to stay with relatives in the village of Kulundu, to the west of Dostuk, just in case.

“If my house is destroyed, then I will build a new house in its place. This is my land, and I will live here,” he told Eurasianet as he took sips from a glass of bozo, a beverage made from fermented millet, while watching television.

The night passed quietly though. By the morning, his family was already back at home performing household chores.

On the road to Margun, road workers were already taking measurements, apparently in preparation for the kind of refurbishment being demanded by Dostuk residents. There is no way to know how soon the work will actually be done. 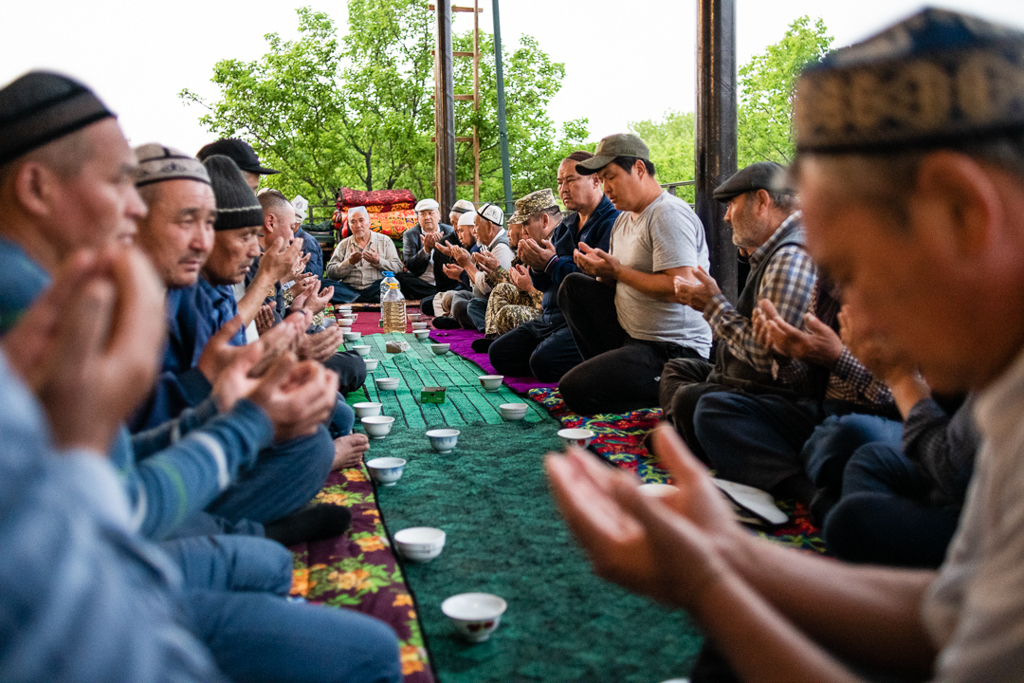 A man heading in the direction of Margun to fetch his family had parked his overheating Lada Zhiguli by the side of the road. He was livid at the Emergency Situations Ministry claims that it had helped residents evacuate from Dostuk.

“We evacuated ourselves,” he fumed.

But not everybody was so eager to return home.

Back in Dostuk, two days after the fighting had flared, the head of the village, 65-year-old Sulaiman Ergeshov, was at his office organizing the return of all the fleeing families. A pile of cigarette butts lay discarded outside his window. His WhatsApp lit up with constant incoming audio messages. He recorded an announcement to ask if anybody needed help coming back to Dostuk. Nobody answered. 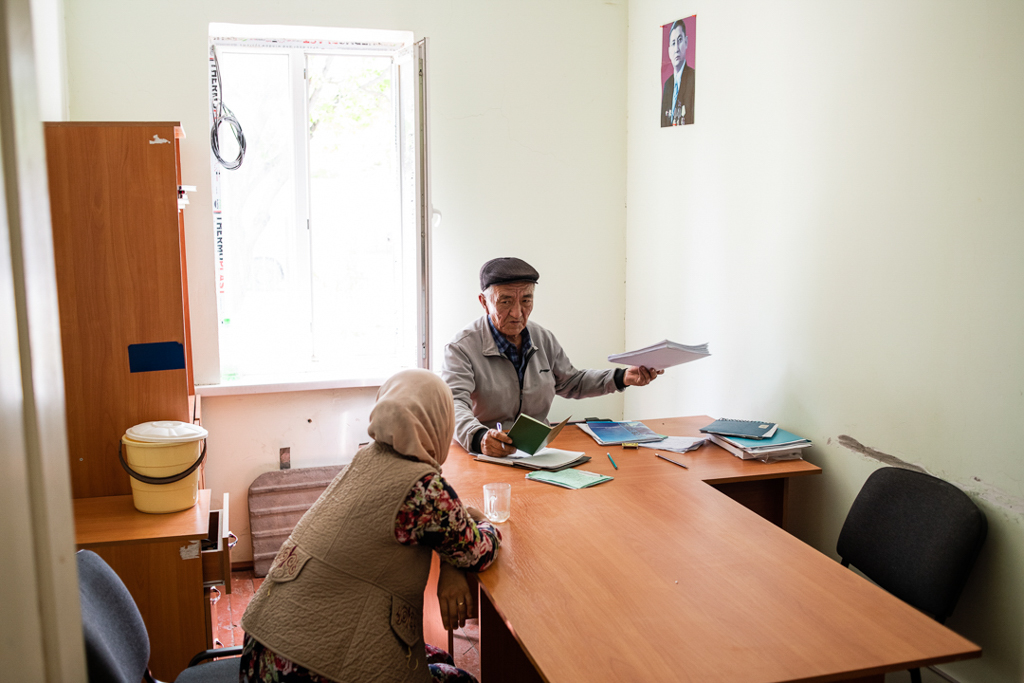