Kyrgyzstan: President Bakiyev Wants to Close US Military Base Outside Bishkek 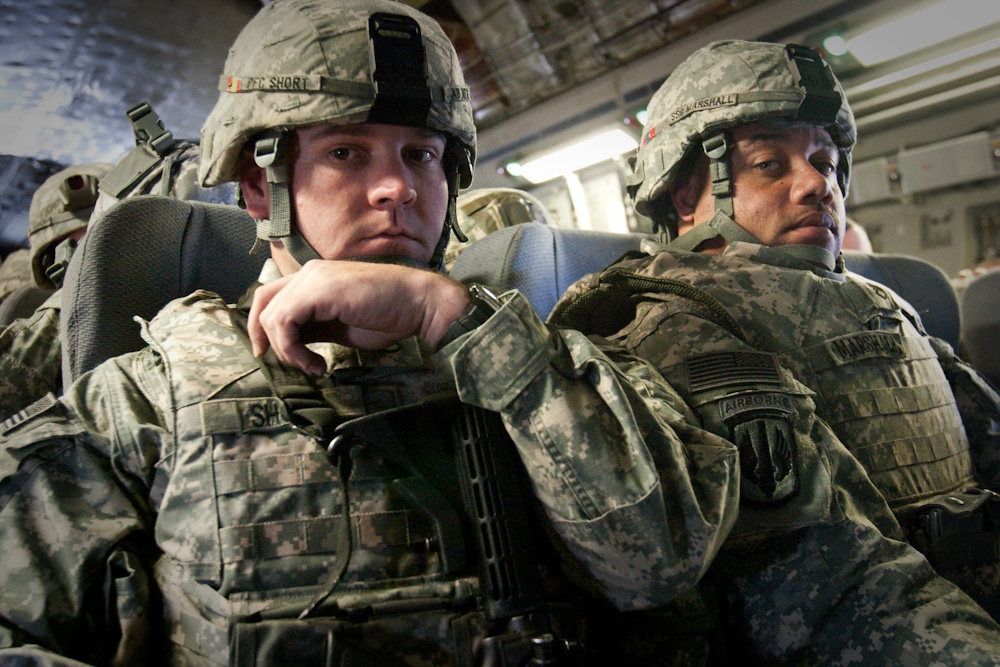 Soldiers deploying to Afghanistan prepare for the flight in the cramped quarters of a C-17. (Photo: David Trilling)

Kyrgyz President Kurmanbek Bakiyev made the announcement about the closure on February 3 in Moscow following a meeting with Russian leader Dmitry Medvedev. During that meeting, Moscow promised to give an assistance package to Bishkek worth an estimated $2.15 billion.

In announcing that US forces would have to vacate the Manas base outside the Kyrgyz capital, Bakiyev cited the repeated inability of American and Kyrgyz negotiators to agree on mutually satisfactory lease terms. [For background see the Eurasia Insight archive]. At the same time he praised the Russian government for extending a massive amount of aid to Bishkek. "These are very important agreements," Bakiyev said, referring to the Russian pledge of loans, direct grants and investment.

Bakiyev did not specify a timeframe for the base closure, indicating that the Kyrgyz government would work out the details in the "next few days," the Prime Tass news agency quoted him as saying. The vagueness of the statement is prompting some observers to question whether Bakiyev's decision is final. Several experts said the Kyrgyz president may be trying to obtain the maximum financial advantage out of two powers - the United States and Russia - that are vying for geopolitical supremacy in the country.

Azamat Temirkulov, a political scientist at the American University of Central Asia in Bishkek, said that US forces need not start packing their bags just yet. Citing the fact that US-Kyrgyz negotiations over the base have a history of brinksmanship, he suggested there may yet be a lot of negotiating still to do. "He [Bakiev] said it will happen, but he didn't say when," Temirkulov emphasized. "The last time when there was talk [about closing the base], the Kyrgyz government said 'yes, it will happen,' but never specified when." That was two-plus years ago, he added.

Both US military representatives at the Manas Base and NATO officials in Brussels declined to offer immediate comment on Bakiyev's announcement. The US Defense Department has announced that it is interested in negotiating a new lease agreement. Broadening the Central Asian transit corridor for Afghanistan has taken on increasing importance for Washington in recent months, as Taliban attacks on the key routes via Pakistan have repeatedly disrupted the flow of supplies to coalition forces.

While rumors had been circulating for weeks that Bakiyev would be willing to close the American base in return for a massive injection of Russian aid, the February 3 announcement nevertheless came like a "bolt from the blue," said Paul Quinn-Judge, a Bishkek-based expert for the International Crisis Group.

"The base has been subject to much rumor and maybe this is the opening of an extreme stage of negotiations. But if they have definitely decided to close the base, it is a very, very significant move. The effects will be very long lasting and very interesting to watch," he added.

Judging by Bakiyev's comments to date, a final decision on the base may come down to money. During a visit to Bishkek in January, the chief of the US Central Command, Gen. David Petraeus, indicated that Washington provides about $150 million in aid to Bishkek annually. Of that total, about $63 million "is connected to Manas," Petraeus said.

The Russian aid package that Bakiyev accepted on February 3 includes $150 million in direct aid that does not have to be repaid. On top of that, the Kremlin extended a $300 million loan at a nominal interest rate that makes it almost like a gift. The bulk of the aid package - worth about $1.7 billion - involves a pledge to invest in the construction of the Kambarata-1 hydro-power plant. In addition, the Kremlin indicated that it would write off $180 million in Kyrgyz debt.

Given that Kyrgyzstan's annual budget is roughly 1.1 billion, the Russian aid could, in theory, go a long way toward easing Bishkek's pain during the ongoing global financial crisis.

Some experts, however, caution that Bishkek cannot necessarily count on Russia to follow through on all of its pledges, especially the investment commitment concerning the Kambarata-1 hydropower station. Such deals in Central Asia have a track record of failure. For instance, the Russian entity Rusal entered into a $2-billion deal to complete the Rogun dam in Tajikistan. But three years later the two sides went their separate ways and the Rogun project remains unfinished. [For background see the Eurasia Insight archive]. These days, Russia and Tajikistan are barely on speaking terms. [For background see the Eurasia Insight archive].

Kyrgyzstan's intentions could become clearer over the next few days. Bakiyev was due to remain in Moscow on February 4 to participate in multilateral meetings of the Eurasian Economic Community and the Collective Security Treaty Organization.

Temirkulov, the Bishkek political scientist, said Kremlin leaders, by apparently pushing Bakiyev to oust US forces from Manas, may be letting their visceral dislike of the United States cloud their judgment concerning Russia's own best interests. The base, Temirkulov noted, plays an important support role for ongoing military operations in Afghanistan.

"I don't know why Russia would be interested in the closure of this base, because Russia is also interested in [promoting] security in Afghanistan," Temirkulov said.

David Trilling and Deirdre Tynan are EurasiaNets correspondents in Bishkek.