The health minister then drank the concoction at a press conference. 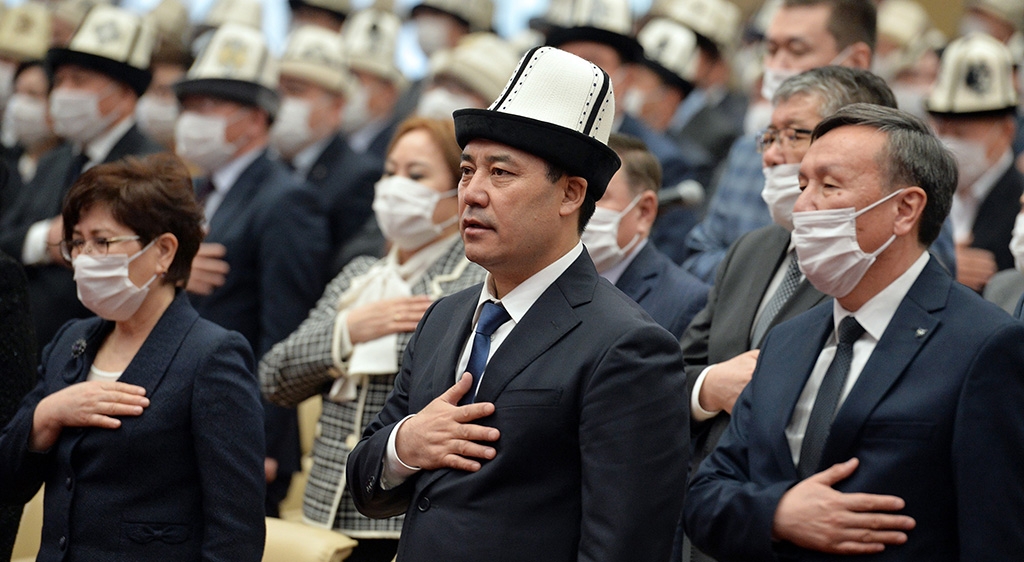 Kyrgyzstan’s president has alarmed health specialists by recommending coronavirus patients consider consuming a purported cure of a brew made with a poison root.

In a bid to quell the outcry over those remarks, the country’s health minister, Alymkadyr Beishenaliyev, gathered journalists for a press conference on April 16 and drank the concoction in front of them.

This is all playing out just as Kyrgyzstan appears headed into a new wave of COVID-19 infections – a situation that the government freely admits may overwhelm its healthcare system.

President Sadyr Japarov has largely ignored the coronavirus crisis of late, but he returned to the subject on April 15, when he offered some familiar recommendations on his Facebook page.

“Always comply with sanitary standards, wear masks,” he wrote. “If symptoms appear, go to the hospital immediately, do not stay at home.”

But he then dangled the prospect of a miraculous way out.

“Our doctors have discovered a way to treat the disease … during the initial stage of illness,” Japarov wrote.

By way of illustration, he attached a video showing a group of men, all without masks or gloves, decanting a mysterious, cloudy liquid into plastic bottles. A close-up shot showed labels on the bottles carrying the words “Uu Korgoshun,” which literally translates from Kyrgyz as “poisonous lead.” That is the Kyrgyz name for a plant called wolf's-bane, or Aconitum in its Latin designation.

The herb has been used in various ways since antiquity, most famously as poison, although also as an herbal medicine.

Japarov, who rose to become leader of the country in October after being sprung from prison, where he was serving a sentence on hostage-taking charges, swears to the efficacy of its curative properties. Last June, while Japarov was behind bars, it was said that he was consuming the wolf's-bane brew and even giving it to fellow inmates.

“Japarov has sent a letter to the president in which he proposed using this medicine in the fight against the epidemic,” Japarov’s lawyer, Sharabidin Toktosunov, said at the time. “He wrote in the letter that this medicine was used by his parents and that it can be very dangerous. If used improperly, it can harm a person, but at the same time it could cure cancer.”

The suggestion that desperate people should resort to an entirely untested and very possibly lethal solution has stunned medical experts. Evidence-based medicine specialist Bermet Baryktabasova told the 24.kg news website that recommending the consumption of wolf's-bane is theoretically a criminal offense.

“This plant belongs to a class of powerful but little-understood poisons. It has already claimed many lives. All Kyrgyz people know about this root – Uu Korgoshun. The very name contains the word ‘poison.’” Baryktabasova said.

Even the normally circumspect World Health Organization has been moved to issue a statement stating that it has no information about the effectiveness or safety of wolf’s bane.

Baryktabasova said the health minister should be made responsible for the policy of encouraging use of the plant.

Sure enough, Beishenaliyev has lived up to that demand by consuming the wolf's-bane brew in front of a packed room of journalists. The minister drank the tincture by the microphone so that the sound of gulping could be heard clearly.

Beishenaliyev then offered some tips on how to avoid the potential pitfalls of consuming a poisonous plant.

Beishenaliyev claims that 300 people have already been treated with the tincture.

The minister cited Japarov as the inspiration for this purported cure.

“Now many people are treating themselves with this medicine. Sadyr's father … taught him how to measure out the right dose for treating people usefully. And Sadyr Nurgozhoevich has been teaching us the right dose over the last 15 days,” Beishenaliyev said, referring to the president by name and patronymic.

Beishenaliyev added that he now aspires to also learn the art of dosing wolf’s brew.

“For a long time, Sadyr Nurgozhoevich’s father used it and passed on the knowledge to his son. I too want to learn, and I am asking him [Japarov] every day to come to us for an hour and teach us about dosing,” he said.

Beishenaliyev said the roots of the wolf's-bane plant grow prodigiously in the mountain pastures near Japarov’s family home. Health Ministry workers have been dispatched to that location to collect plants from which more of the potion will be produced, he said.

In the absence of tested medical treatments, many in Kyrgyzstan have been turning to folk remedies, although none have received an endorsement from so senior an authority.

Last March, messages spread like wildfire across WhatsApp groups extolling the virtues of ginger- and lemon-based concoctions as a defense against coronavirus infections. The chatter became so great and insistent that retail prices for these items surged. Dog and badger fat were likewise widely used as dietary supplements in the belief they might ward off disease.

Another folk technique that made a resurgence during the first wave of COVID-19 was a form of bloodletting known as hijama, or wet cupping. The patient has suction cups placed along certain areas of the body, and incisions are then made to those vacuum-inflamed patches of flesh, purportedly enabling some form of detoxification.

Japarov is not alone among the region’s presidents to offer spurious coronavirus-related health advice.

In December, Turkmenistan’s President Gurbanguly Berdymukhamedov spoke at a Cabinet meeting about the virtues of licorice roots, which he said have been used since old times to treat coughs and respiratory diseases. There have been countless references to the curative properties of licorice in state media since that time.

No leader is better known for offering controversial medical recommendations, though, than former U.S. President Donald Trump. In April 2020, Trump provoked much dismay when he used a coronavirus briefing to wonder whether doctors might consider administering disinfectant as a form of treatment.

“I see the disinfectant that knocks it out in a minute, one minute. And is there a way we can do something like that by injection inside or almost a cleaning?” he asked. “So it would be interesting to check that ... you’re going to have to use medical doctors ... but it sounds – it sounds interesting to me.”