Temirov says the charges against him are "absurd" and politically motivated. 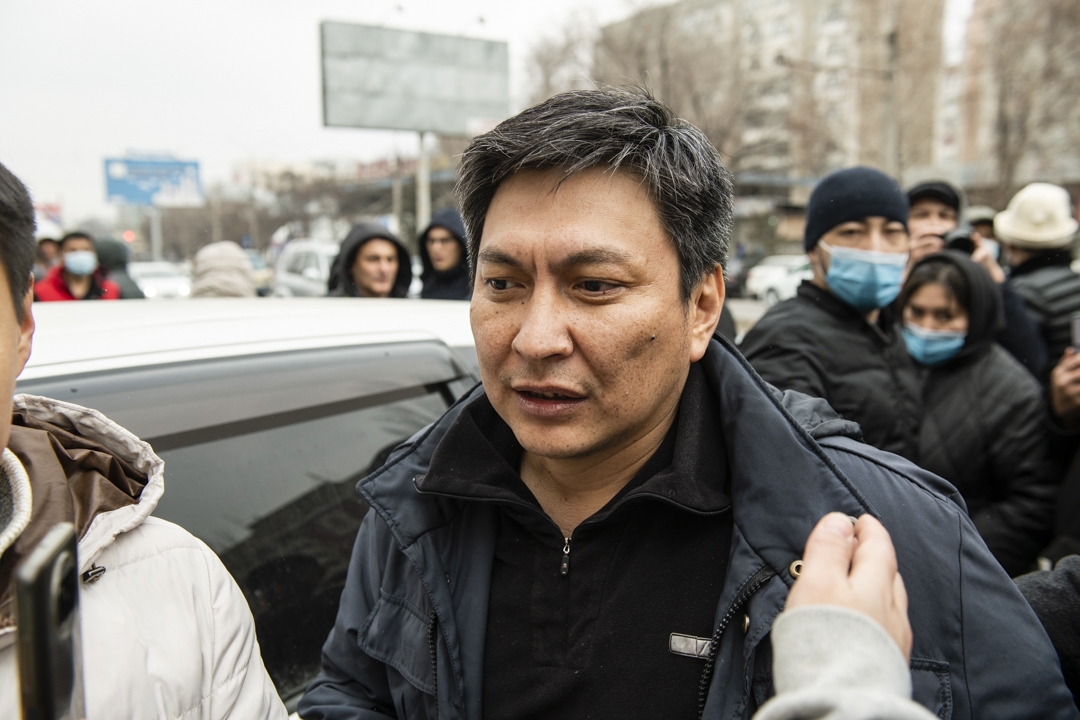 The prospects for an investigative journalist in Kyrgyzstan facing numerous criminal charges appeared to worsen on April 25, when the president placed his thumb on the scale by accusing him of forging documents.

In an interview to state-run news agency Kabar news agency, President Sadyr Japarov said Bolot Temirov, 42, who has proven a thorn in the side of the authorities, only obtained Kyrgyz citizenship by means of fraud.

“He stole someone else’s military ID, pasted in his own photo, changed his last name and, on the basis of this military ID, received a Kyrgyz passport,” Japarov said. “He used to be a Russian citizen.”

The remarks may well prejudice the likelihood of a fair trial for Temirov, who was on April 19 charged with multiple offenses, including counterfeiting official documents and illegally crossing the border.

Two days earlier, the journalist’s team had published a report alleging favoritism in the granting of fuel contracts that saw the son of the head of the security services, Kamchybek Tashiyev, securing a government contract without bidding for a tender.

Temirov says he was summoned for police questioning one day after the investigation was published online. Tashiyev, a long-time close associate of President Japarov, denies that any criminal charges are connected with the claims made by Temirov and colleagues that his son and other relatives of his have been benefitting financially from their access to powerful people in government.

“We cannot make allowances for journalists. A journalist breaks the law and you leave him unpunished, you can't do that. Every person must answer before the law,” Tashiyev told 24.kg news agency on April 25.

Temirov has described the accusations against him as “absurd” and said that these prosecutions would not stop his team from investigating government corruption.

“I repeat once again, if you don’t want to end up the subject of investigations, then live honestly,” he commented after these latest charges were announced.

The assault on Temirov has taken on more covert and sinister qualities too. Just as the police were announcing their charges, an anonymously produced video titled “Who is Bolot Temirov?” began to be circulated online by supporters of Japarov and Tashiyev. The narrator described Temirov as a “pretend patriot” who is retaining a Russian passport in order to one day escape there.

“Since Temirov spent all his childhood and youth abroad, he was naturally not brought up with the values of his country, the traditions and the customs of the Kyrgyz people. Therefore, he does not care what will happen to the Kyrgyz people. Despite the fact that Temirov is of Kyrgyz origin, his consciousness and intellect are completely paralyzed,” the commentator states.

Temirov lived with family in the southern city of Osh until they moved to Russia when he was 7. He returned in 2006 to take up a job in journalism.

This latest battery of criminal charges is worsening things for Temirov. On January 22, armed and masked police barged into Temirov's office claiming to be following up on a drugs tip. Police then claimed to have found a bundle of hashish weighing 7.8 grams in Temirov’s pants. That purported bust happened just two days after Temirov uploaded an 11-minute video report accusing the Tashiyev family of enriching itself through the resale of fuel oil produced by a state-controlled refinery.