Japarov is behaving as though he is already PM, although his position remains uncertain. 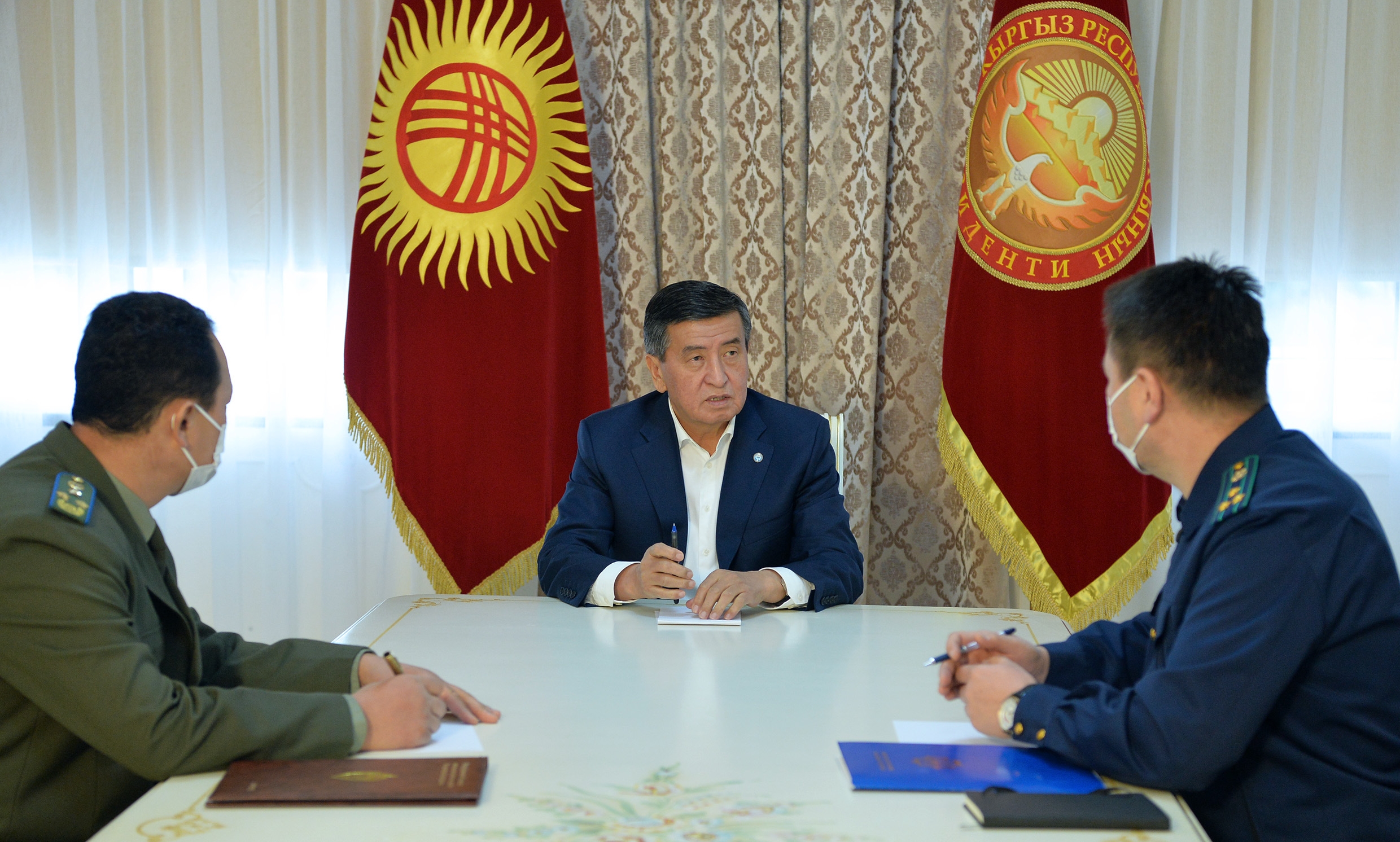 Kyrgyzstan’s president has once again introduced a state of emergency in the capital as the country remains mired in a political quagmire provoked by unrest that erupted early last week.

Sooronbai Jeenbekov’s office said on October 12 that he was forced to issue the decree after members of parliament declined to approve an earlier order to station military personnel in and around Bishkek.

Meanwhile, Jeenbekov has demurred in giving any clear indication on whether he intends to support the contentious nomination of Sadyr Japarov as prime minister. Refusal to do so could trigger more turbulence, as Japarov has shown willingness to deploy large crowds of aggressive supporters to achieve his goals.

The circumstances under which Japarov’s nomination was approved, however, are coming under sustained scrutiny and criticism. Questions are focusing in particular on whether the rump parliament that convened at the Ala Archa state residence to consider the matter on October 10 had assembled the necessary number of MPs.

One prominent deputy, vice speaker Aida Kasymaliyeva, has told media that there were far fewer than the required 61 members of parliament present at the vote and that Japarov’s candidacy could not, as a result, be considered legitimate. Kasymaliyeva added, moreover, that the deputies who were in attendance had come under pressure to give their approval. Kasymaliyeva left before the vote took place.

Japarov ally Melis Aspekov, on the other hand, has contended in an interview with RFE/RL’s service, Radio Azattyk, that when accounting for powers of attorney, 63 deputies had their votes registered at the state residence. This is higher than the number of 61 reported by spokespeople for the rump parliament on the evening of the vote.

There is no paperwork to adequately document either claim, though. And legal experts argue that proxies may not, in any case, vote on behalf of their colleagues in parliament when appointing a prime minister.

President Jeenbekov looked intent on signaling on October 12 that he is prepared and able to enforce order in the country. Although his exact whereabouts are still unknown, a photograph has appeared of him meeting with deputy head of the State Committee for National Security Talantbek Saliyev and the first deputy Prosecutor General Nurlan Dardanov.

Dardanov spoke at the meeting about ongoing investigations into the unrest that began to rock Bishkek from October 5, when protests against the result of parliamentary elections spiraled into a night of furious rioting that culminated with mobs seizing the White House government building. Japarov was released from a prison where he was serving a lengthy sentence on kidnapping charges on the morning after those disturbances began.

Saliyev, meanwhile, told the president that security bodies were working to “suppress the activities of destructive groups taking advantage of the current situation to try to disrupt the peace.” 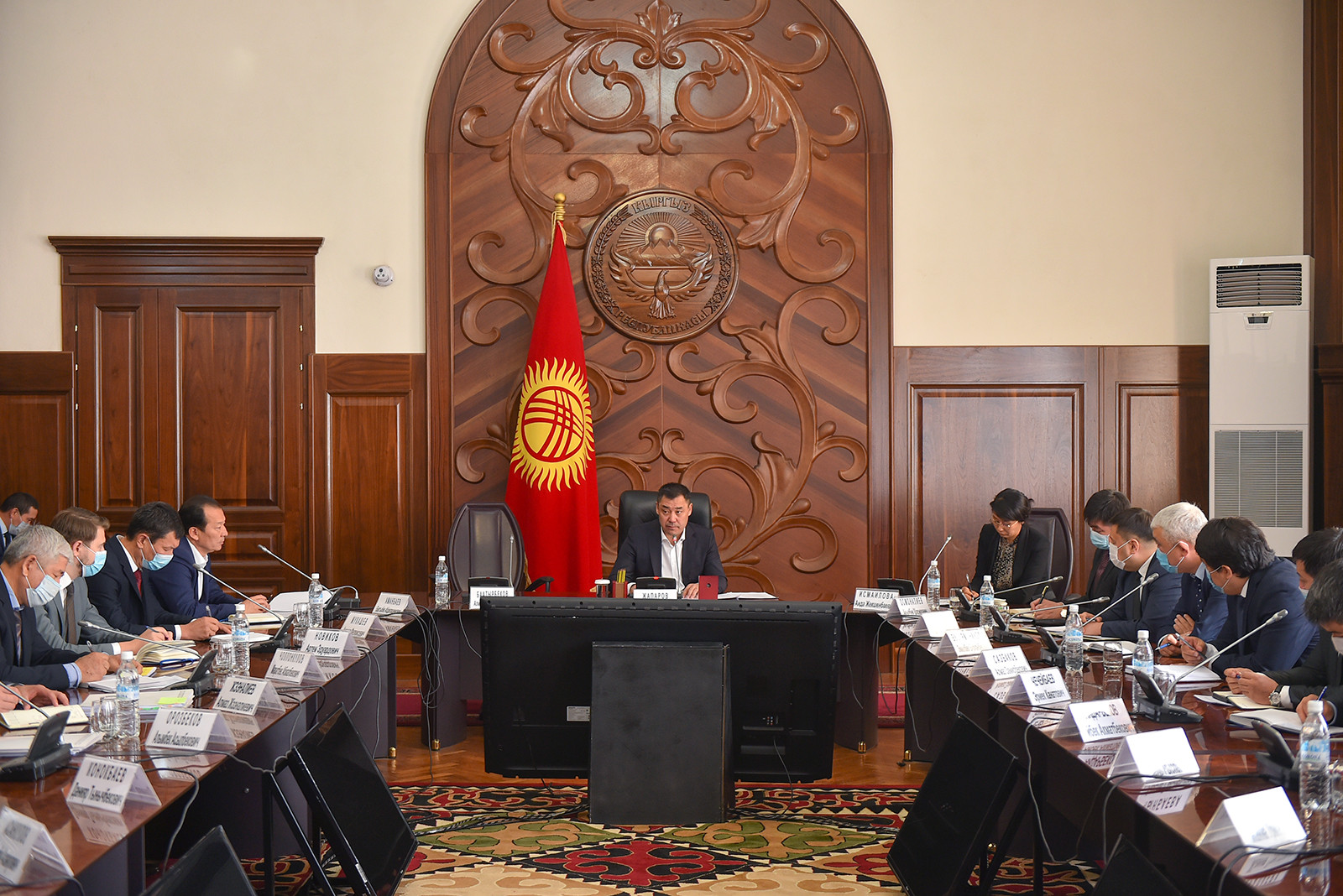 Japarov for his own part has been eager to convey the normalcy of his unconfirmed institutional role and so he conducted, to that end, his maiden Cabinet session on October 12. Japarov, whose supporters spent much of last week engaged in trying to seize government buildings, threatening reporters and assaulting political opponents, told ministers that stability was a priority for the country to pursue its development goals.

“All state bodies should operate as normal. The tasks we face, which include optimizing the public administration system, cutting back on bureaucracy, implementing measures to restore economic activity and provide support for private enterprise, must be addressed in short order,” he was reported as saying by AKIpress news agency.