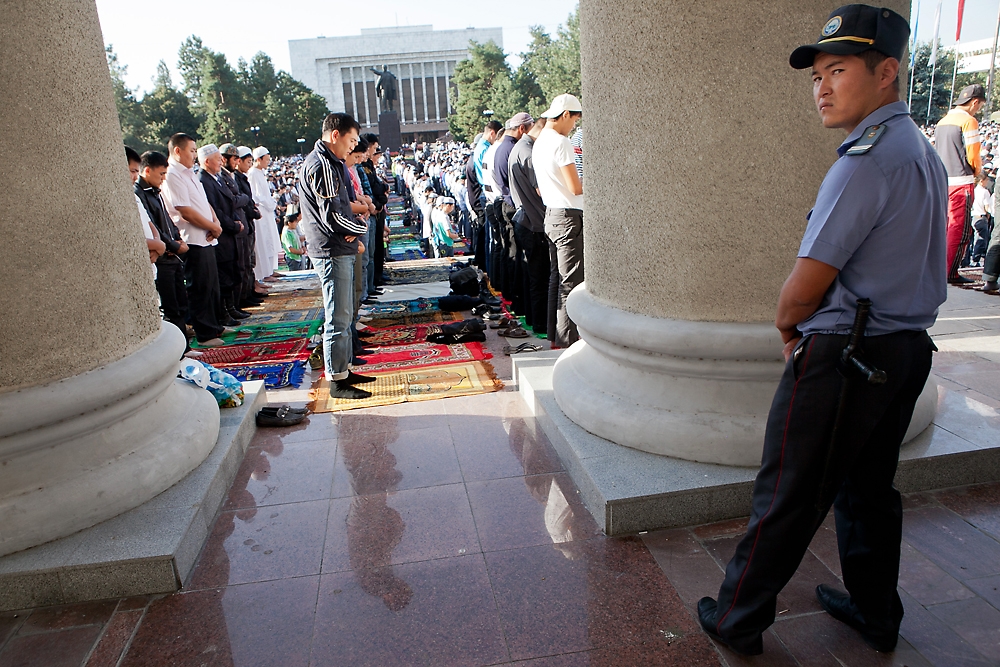 Keeping Islam under the watchful eye of the state. (Photo: David Trilling)

Political leaders in Kyrgyzstan tend to have their roots in the atheist, Soviet past, and thus are prone to be skeptical of religion. Yet unlike their counterparts in other Central Asian states, they have been relatively tolerant of Islam’s revival. But now speculation is swirling about whether President Almazbek Atambayev’s recent broadside against Islam signals a changing government stance on religion.

Criticizing the spread of “Arab culture” at the expense of “native ethnic culture,” Atambayev, speaking at a meeting of the Defense Council on February 3, lamented that “there are many people with long beards on our streets now. They force our girls to dress in black instead of light and colorful clothing. This is what widows usually wear here.”

The comments, picked up by almost every news agency in the country, quickly developed into a national talking point. The timing was seen as significant, coming in the wake of yet another scandal at the state-sanctioned Spiritual Administration of Muslims of Kyrgyzstan, or Muftiate, which is reeling after a third leader in four years was forced out.

Atambayev’s remarks would be seen as normal coming from a president in neighboring Uzbekistan or Tajikistan, authoritarian states that have little tolerance for religious freedom. But they have generated lots of buzz in Kyrgyzstan.

Many in Kyrgyzstan – the only Central Asian republic that has not banned Tablighi Jamaat, a proselytizing Islamic group, and the only one to allow Islamic dress in public schools – fear rising adherence to Islamic practices is undermining security. Changes made to the Law on Religion under then-President Kurmanbek Bakiyev in 2009 upset proselytizing religious communities, whose members complained of government encroachment. At the same time, the legislation did not go far enough for many secularists.

Emil Talantbekov, the appointed leader – or “domkom” – of an apartment building around the corner from Bishkek’s central mosque, hailed Atambayev’s tirade as a “pleasant surprise.” But he worries that the president’s words won’t lead to any changes. Describing himself as “Muslim by birth only,” Talantbekov has grown alarmed at how the mosque has transformed his neighborhood over the past 10 years. He would like to see the government ban puritanical Islamic groups and/or impose tighter control over madrassas.

“Too many [Kyrgyz] don’t understand the Koran,” he said. “They support Islam like supporters of a sports team. It is a dangerous new populism.”

Atambayev, who oversaw amendments to the Law on Religion in December 2012 that allowed for censorship and controls on the import of religious materials, also used his February 3 speech to criticize the Muftiate, which is consistently embroiled in allegations of corruption related to administering hajj pilgrimages for Kyrgyz believers. The most recent ex-mufti, Rakhmatullah Egemberdiev, who resigned on January 7, faced additional accusations of adultery when a videotape of him apparently having sex with a young woman was posted on the Internet. Egemberdiev claimed the girl was a second wife, married through an Islamic marriage ceremony. Technically, however, polygamy is illegal.

Atambayev’s speech was strategic, according to Kadyr Malikov, a frequent religious-affairs commentator in Bishkek, focusing as it did on both secularist concerns about Islamic influence from abroad and the “believers’ disillusion” with the Muftiate. Malikov fears the near-constant scandals at the Muftiate could drive Muslims toward less traditional and possibly radical beliefs.

“The words of the president show the government has its ear to the ground and is about to become a more active agent in religious affairs,” Malikov said. “That is good news in principle. The problem is usually in execution.”

Previous attempts to exert more effective oversight over Kyrgyzstan’s myriad religious groups have been either heavy-handed or ineffective, says Saltanat Musuralieva, a member of the public advisory board at the State Committee on Religious Affairs. The SCRA, as a regulator of faith-based organizations, was “designed as a bridge between the state and believers, but hasn’t fulfilled its function yet,” Musuralieva told EurasiaNet.org.

“The government tends to pressure groups it doesn’t understand,” she added. Indeed, arrests of members of marginal, banned groups – such as Hizb-ut Tahrir – are reported almost weekly in Kyrgyzstan.

In addition to officials’ skepticism of Islam, Musuralieva acknowledged that scant understanding of the faith’s tenets among believers represents a long-term security threat. “When I travel to [poorer] southern regions [of Kyrgyzstan] and see seven-year-olds wearing headscarves, I tell their parents ‘Why is your daughter wearing a headscarf? She hasn’t reached puberty yet.’ We lived under atheism for 70 years and now people are swamped by different ideas. So, they overcompensate,” she said.

Atambayev himself risks overcompensating, some practicing Muslims contend. Instead of improving the state-mosque relationship, he could widen the divide between believers and the post-Soviet elite. Aizada Jenishbek kyzy, 19, a practicing Muslim and student at Bishkek’s Kyrgyz National University, objected to Atambayev comparing girls wearing dark clothing and headscarves to “widows,” for instance.

“I am not in mourning,” Jenishbek kyzy told EurasiaNet.org. “This is my religion and the religion of my parents, which prescribes modesty for females. In the Koran it is not written that girls need to wear colorful clothing. Our president’s comments were not thoroughly considered.”

Jenishbek kyzy’s friend, who gave only her first name, Madina, agreed. “I see our officials praying in public at Orozo Ait [the prayer marking the end of the holy month of Ramadan], and hear [Deputy Prime Minister Kamila] Talieva boasting about completing the hajj. But these people only understand power and PR. I think they are godless,” Madina said.