The four parties friendliest to President Sadyr Japarov have spent more than all 17 other parties combined. 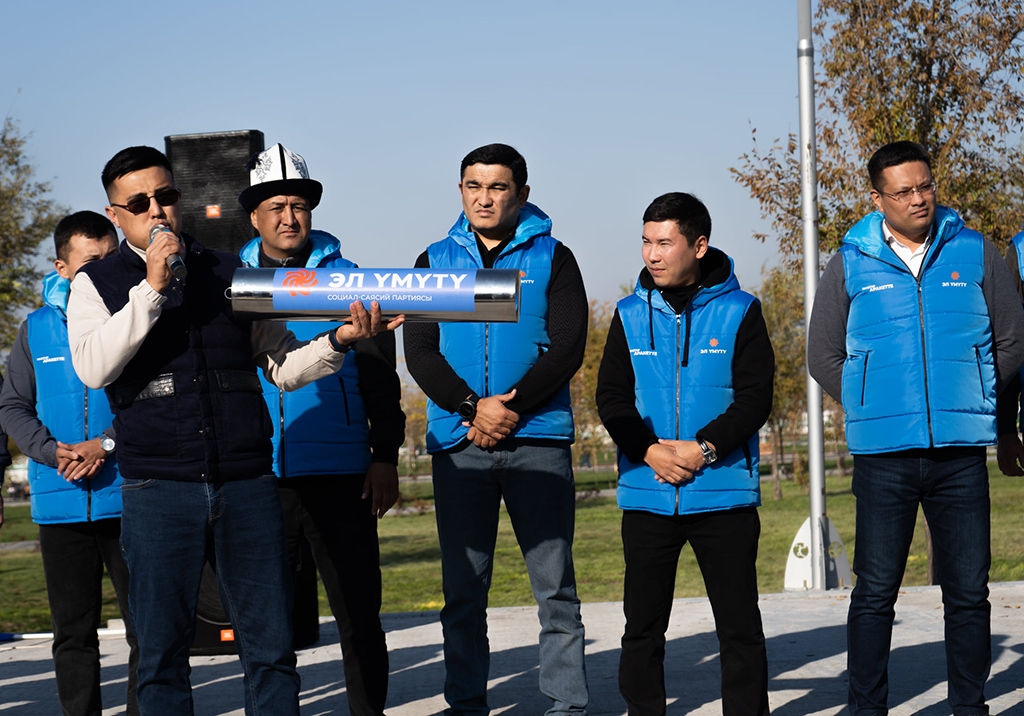 Members of El Umutu have been instrumental in the president’s drive to nationalize the Kumtor gold mine. (El Umutu/Facebook)

Kyrgyz citizens will cast ballots later this month for a new, smaller parliament with fewer powers. Oversight will likely be lax since some of the country’s best journalists have been forbidden from monitoring the vote.

President Sadyr Japarov, who seized power last autumn amid protests following blatantly falsified parliamentary elections, pushed through constitutional reforms earlier this year that downsized the legislature from 120 to 90 members and reduced its powers. Now 21 parties are vying for 54 seats, while more than 300 individuals are running in 36 single-mandate constituencies tied to districts.

Kyrgyz politics is more about coalition building than ideas and it is common for politicians to bounce between parties, or start a new party, ahead of a vote. This year is no different, and many of the parties on the ballot at first appear unfamiliar.

Mekenchil, the party of Japarov’s closest ally, security chief Kamchybek Tashiev, isn’t running. But a number of the Japarov-Tashiev ruling tandem’s supporters can be found on the lists of newly formed parties, such as Ishenim (Trust) and Yntymak (Harmony), as Kaktus Media reported. Mekenchil members and people from Japarov and Tashiev’s circle are also on the list of Ata-Jurt Kyrgyzstan, a reinvented version of their old party, Kloop reported.

Japarov and Tashiev made a name for themselves in the early 2010s agitating for the nationalization of the Canadian-owned Kumtor gold mine. Now that they’re in power and fulfilled a years-old promise to take control of the mine, they are the most trusted politicians in Kyrgyzstan, according to a September survey, even if they are reportedly struggling to operate the high-altitude facility on their own and the country is slipping into an energy crisis.

With administrative resources, and loyalists sprinkled across the ballot, it is a near certainty that Japarov and Tashiev can ensure the smaller, weaker parliament is also pliant.

Witness a standoff between their friend, current speaker of parliament Talant Mamytov, and the Central Election Commission (CEC), as it creeps toward resolution in their favor. The CEC stuck to the rules last month when it declined to register Mamytov on Yntymak’s list because he was still holding the speaker’s office. This week, the CEC approved Mamytov’s candidacy following a Bishkek court ruling. (Japarov, Mamytov and Tashiev stood trial together and served time in 2013 for a violent anti-government protest related to Kumtor).

Few are surprised to see the three parties closest to Japarov and Tashiev – Ata-Jurt Kyrgyzstan, Ishenim, and Yntymak – lead in campaign spending. Another big spender with some Japarov-friendly members is El Umutu (People’s Hope). Between the four of them, they have spent more than all other 17 parties combined, according to CEC data.

El Umutu promotes itself as “the party of untarnished and knowledgeable youth” who want to change the old, corrupt system. Most of its candidates don’t have previous political experience, and two-thirds are under 35. However, questions have arisen about who is bankrolling the new party.

Last week, a video clip began circulating from a March interview given by El Umutu leader Bolot Ibragimov, who amassed a large following for his activism against corruption in law enforcement. In the interview, Ibragimov defended disgraced ex-customs official Rayimbek Matraimov. Matraimov was the face of corruption in 2019 and 2020 when he featured in several high-profile media investigations that alleged he had stollen hundreds of millions of dollars during his time as deputy head of Kyrgyzstan’s customs service. When Japarov came to power, the new president made a show of detaining Matraimov. A few months later, in February, Matraimov pleaded guilty, and then walked free with a small fine, having previously repaid a fraction of damages to the state. Matraimov’s brother, Iskender, is running independently on his home turf, the southern district of Kara Suu.

El Umutu called allegations that it receives money from Matraimov a smear campaign and said that its own candidates were financing the party.

The El Umutu platform supports the president’s key initiatives and says the party is ready to defend Japarov from public misunderstanding, while also offering him constructive criticism. Prominent members have supported Japarov’s move to nationalize Kumtor. One was instrumental: Nariste Kalchayev – who was sentenced to prison in 2014 for taking a governor hostage during a Kumtor rally – was one of four plaintiffs behind a lawsuit this past May that allowed the government to grab the cash cow.

El Umutu was also in the news this fall when an opposition member of parliament charged that Japarov’s son Rustam was recruiting for the party. Last month the president said that members of his family “don’t interfere in politics.”

His allies don’t have such qualms. Tashiev’s brother Shairbek is running as an independent in Jalal-Abad. The brother of Japarov’s former prime minister Ulukbek Maripov is a candidate in Nookat. Tengiz Bolturuk, the state-appointed administrator of Kumtor, has a brother, Omurbek Bolturukov, running as an independent in Issyk-Kul; his nephew Daniyar Bolturukov is on the El Umutu list.

Hopes for a fair election were delt a blow on November 8 when the CEC ruled that Kloop.kg monitors would be forbidden from entering polling stations. For the past several election cycles, Kloop has recruited volunteer monitors who have uncovered scores of violations. Now the CEC cited a new rule to deny Kloop registration: Only organizations that expressly state in their charter that they specialize in elections or human rights will be allowed to be observers. Kloop has vowed to appeal. Co-founder Rinat Tuhvatshin told the International Partnership for Human Rights that “this decision has already demonstrated that transparency is not a priority for the Kyrgyzstani authorities.”

What about the winners of the 2020 parliamentary elections – Birimdik, Mekenim Kyrgyzstan, and Kyrgyzstan – which triggered the unrest that thrust Japarov into power and were eventually annulled? Most of their candidates either migrated to new parties or are not running. Former president Sooronbai Jeenbekov has maintained a low profile since handing his job to Japarov. His brother Asylbek Jeenbekov has been in custody as part of a corruption probe into Kumtor.

Other familiar names can be found in the opposition camp.

Two sons of imprisoned former president Almazbek Atambayev are seeking seats: 45-year-old Seiitbek Atambayev is running independently, while Kadyrbek Atambayev, 28, is leading the Social Democrats – the successor to Atambayev’s Social Democratic Party, or SDPK, which won almost a third of seats in the 2015 parliamentary elections.

Another Atambayev ally, ex-lawmaker Ravshan Jeenbekov, is running for parliament from jail. He is being held for his alleged involvement in the violent clash between Atambayev’s supporters and security officers in August 2019.

Also running with Ata-Meken this year is investigative journalist Ali Toktakunov, who gained prominence for his work exposing the Matraimov customs corruption in 2019 and 2020. Toktakunov has since left Azattyk, the Kyrgyz service of RFE/RL, and started his own investigative outlet.

Two other vocal critics of Japarov, lawmaker Dastan Bekeshev and lawyer Nurbek Toktakunov, are running as independent candidates in Bishkek and supporting themselves with online crowdfunding.