Authorities are using an old land agreement with Tajikistan to target the party leader. 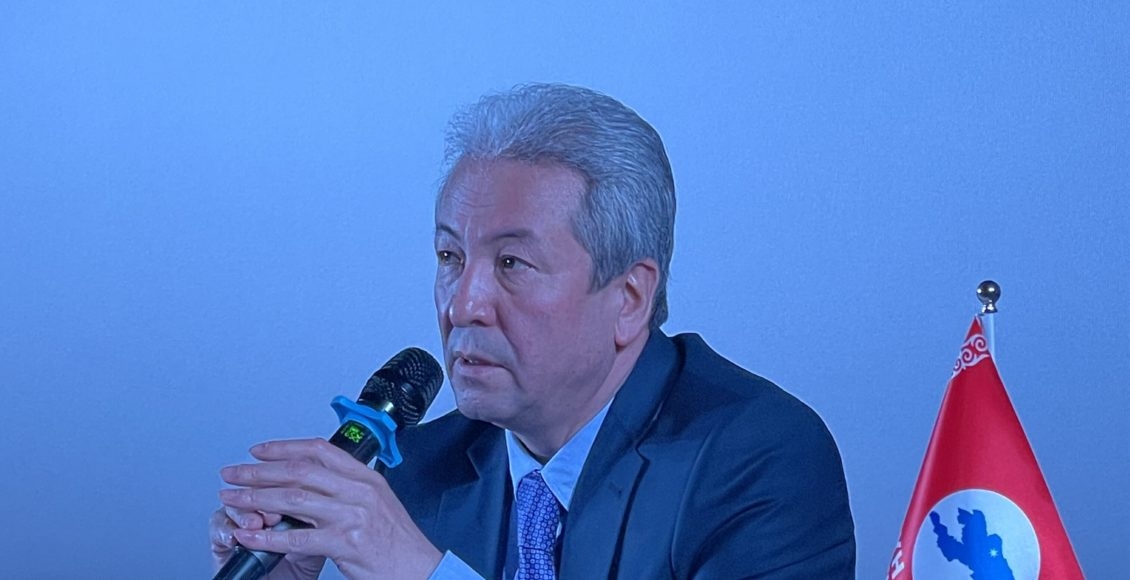 Several senior figures in a political party that won a handful of seats in Kyrgyzstan’s recent parliamentary election have been summoned for questioning by investigators over the past week.

Adakhan Madumarov, the leader of Butun Kyrgyzstan, a former top security official and a lively critic of the government, has been repeatedly interrogated by the General Prosecutor’s Office since January 14, according to his team.

At the start of this week, prosecutors called in another party member and a sitting lawmaker, Iskhak Masaliyev, for questioning.

The investigation into Madumarov is said to be connected to a period in 2009, when he was serving as secretary of the security council. The politician is said to have overseen an agreement with Tajikistan for Kyrgyzstan to take out a 49-year lease on land on the border for the purposes of facilitating a road reconstruction project.

The deal is contentious because although the land in question lies on a disputed piece of territory, the lease has the implied effect of acknowledging that the land belongs to Tajikistan. That, at least, is the case that President Sadyr Japarov has tried to make.

The entire issue was revived in October, when Japarov made a veiled reference to the lease agreement, which he described as a hindrance to fraught ongoing negotiations with Tajikistan on delimitation.

“After the election, we will … conduct a thorough investigation and bring those responsible to justice. There should be no statute of limitations for traitors,” he said in an interview.

Madumarov has rejected charges of wrongdoing. He has said, moreover, that the agreement with Tajikistan had no legal force since it was never ratified by parliament.

The question of border delimitation has become especially emotionally charged since a bloody confrontation between Tajik and Kyrgyz communities last year that drew in government troops from both countries. Swathes of Kyrgyz civil society contend in no uncertain terms that the violence was nothing more than a premeditated attack by Tajikistan aimed at resolving border disagreements by military means.

This scale of the all-out assault on Butun Kyrgyzstan suggests, however, that the actions of investigators may have less to do with historical border recriminations, and more to do with politics. The party won six seats in the 90-member parliament in November’s elections by winning more than 7 percent of the vote.

Yet another party member, Orozayym Narmatova, who is now being accused by the GKNB of obtaining a university degree through fraud, was interrogated on January 14. Narmatova said in an interview with Eurasianet that the accusations being leveled against her are false and that she is being persecuted on pretextual grounds simply because university staff lost her paperwork. Before last year’s elections, the Central Election Commission scrutinized her documents, including her university diploma, over three months and it found nothing amiss, she said.

“This can only be read as pressure being put on the opposition, because it is only our party that is telling the whole truth,” she said. “The interrogation and the nit-picking over the diploma stems from the criticisms about Japarov.”

On January 17, the GKNB tried to bolster its case against Narmatova by summoning her father, Kochkonbai Narmatov, as a witness to their investigations. Narmatova told Eurasianet that she considered it “morally unacceptable” to involve her family in this case, especially as her only sibling recently died.

Japarov personally waded into this ongoing drama by granting an interview to newspaper Vecherny Bishkek in which he spoke in scathing terms about Madumarov and Narmatova. He referred to the former as a “mankurt,” a slur often deployed in Central Asian countries to question a given individual’s patriotism, and said he had committed the most “unforgivable betrayal of the century.”

In response to that January 17 interview, Madumarov dismissed Japarov as a person who spoke ignorantly and presumed to pass judgement on someone who had not committed crimes.

“Before today, I was not aware that Sadyr Japarov have been made both General Prosecutor and a judge,” Madumarov said in a sarcastic aside to journalists.

What is curious about this confrontation is that Japarov's and Madumarov’s parties are only natural foes in that they ostensibly appeal to similar sections of the electorate. Both have built their political brand on populist nationalism and have strong followings among the migrant laborer class.

Madumarov ran in the January 2021 presidential election and finished a very distant second behind Japarov, who won almost 80 percent of the vote. The thrust of criticisms lobbed by Madumarov at Japarov and his allies is that they are seeking power at the expense of improving people’s lives.

“Instead of dealing with domestic and foreign economic affairs, they are only interested in reshuffling personnel. To clear everybody out and then put in their own people, so that everything could become theirs,” he said in an interview in October 2020. “Nothing good will come of this.”

Narmatova is an even more improbable Japarov antagonist. She first cut her teeth on the political scene supporting the current president, back when he was living in exile facing kidnapping charges in his home country.

In 2014, she joined Japarov’s Mekenchil, then a marginal party opposed to the government, at his invitation. The appeal of Japarov for her lay in his long-standing campaign to seek the nationalization of the Canadian-run Kumtor gold mine, which has been roundly criticized for its environmental practices. She has since grown disillusioned with Japarov and thrown in her lot with Butun Kyrgyzstan.

In September, a couple of months before the election, she was detained while attempting to fly out of Osh, the country’s second-largest city, to Russia, where she has lived for some years. She was then questioned on suspicion of trying to whip up anti-government sentiments during rallies with Kyrgyz nationals in Russia.

“At those events, O. Narmatova constantly voiced unfounded criticism of the country’s political leadership so as to increase the potential for protests, both among labor migrants and citizens living in the Kyrgyz Republic,” the Interior Ministry said, arguing that her behavior could lay the ground for a “violent seizure of power.”