Kyrgyzstan: Pressured ex-candidate says he wants no part of power

Babanov has been questioned twice in connection with outstanding criminal cases. 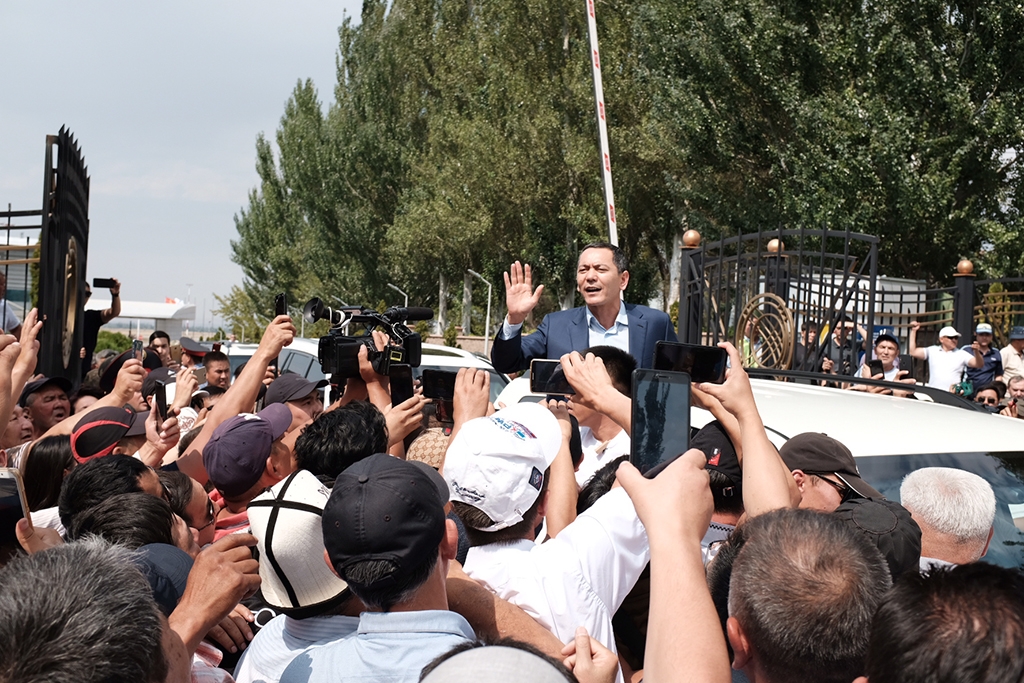 A popular former presidential candidate whose return to Kyrgyzstan has complicated a highly brittle political scene appears convinced that his self-preservation demands a career change.

In the past two days ex-presidential candidate Omurbek Babanov has twice been questioned in connection with criminal cases that his supporters say were only opened because he was current President Sooronbai Jeenbekov’s main challenger during elections in 2017.

He has responded by informing the public that he has no desire to renew that rivalry or re-enter politics at all, despite some encouragement for him to do so.

The summonses came shortly after wealthy magnate Babanov ended a near two-year exile by flying into Kyrgyzstan’s main airport from Moscow in the aftermath of former leader Almazbek Atambayev’s all-action arrest.

That drama, which left an officer dead following clashes between special forces and Atambayev’s supporters at the ex-president's residence near Bishkek might have bought Babanov some time – he was not detained on arrival.

But nor have Kyrgyzstan’s notoriously persistent investigative bodies shown any signs of dropping criminal cases against him, which Babanov’s supporters argue were cooked up by Atambayev – Jeenbekov’s one-time ally – to blacken his name and smooth Jeenbekov’s electoral victory.

The summons from the State Committee for National Security (GKNB) on August 20 relates to comments Babanov made whilst on the campaign trail in a part of Osh city that is inhabited by ethnic Uzbeks.

He faces a charge of inciting inter-ethnic hatred for those comments, which he says were deemed innocuous by an independent expert that he hired.

Speaking before the GKNB summons on August 20, one-time Prime Minister Babanov told journalists that he had decided “to help the people in a different way” than through politics. “I returned to my homeland, but I haven’t returned to politics,” he stressed.

On August 19 he was invited to the Financial Police (Finpol) for questioning related to the takeover of a bank he owns, the Commercial Bank Kyrgyzstan.

Little is known about the case, but accusations of his alleged misdeeds in the acquisition of the bank in 2008 reappeared in local media around the time of the 2017 vote.

Babanov’s claims of retirement may ring hollow for Kyrgyzstan’s powers that be, who have their sights trained on a key parliamentary vote next year.

When Babanov announced he would return to Bishkek, he did so via his main political vehicle the Respublika party, which called for a cooling of tensions after the fatal clashes in the village of Koi-Tash.

Babanov had intended to return home in April of this year only to back down, citing fear of "provocations," presumably prepared by the state.

He may have felt the heightened political crisis this month offered more favorable conditions.

Pessimists were warning of deepening political maelstrom – possibly beyond anything the rattled authorities might be able to control – if authorities detained him.

Optimists meanwhile speculated that Jeenbekov might offer him the chance to be prime minister again, chiefly in order to prevent him allying with an intractable Atambayev, who had all but begged Babanov’s forgiveness for the smears in 2017.

But Babanov has been at pains to stress the differences between himself and the former president.

While Atambayev resisted three police summons prior to the clashes at his residence, Babanov has said he will cooperate with the authorities' investigations.

Atambayev had made his opposition to Jeenbekov official months ago and took to publicly insulting his former protégé.

Babanov, in turn, has rarely come out in strong opposition to any Kyrgyz government, and was even criticized for pulling his punches during the 2017 campaign.

This preference for conciliation over conflict, observers note, may be instructive of the former oil trader’s real priority – securing his significant business interests inside the country.

For the moment, the financial pain of his return has been relatively minor.

Traffic police revealed on August 21 that they had fined him the equivalent of $75 for arriving at the GKNB interrogation in a car sporting tinted windows.