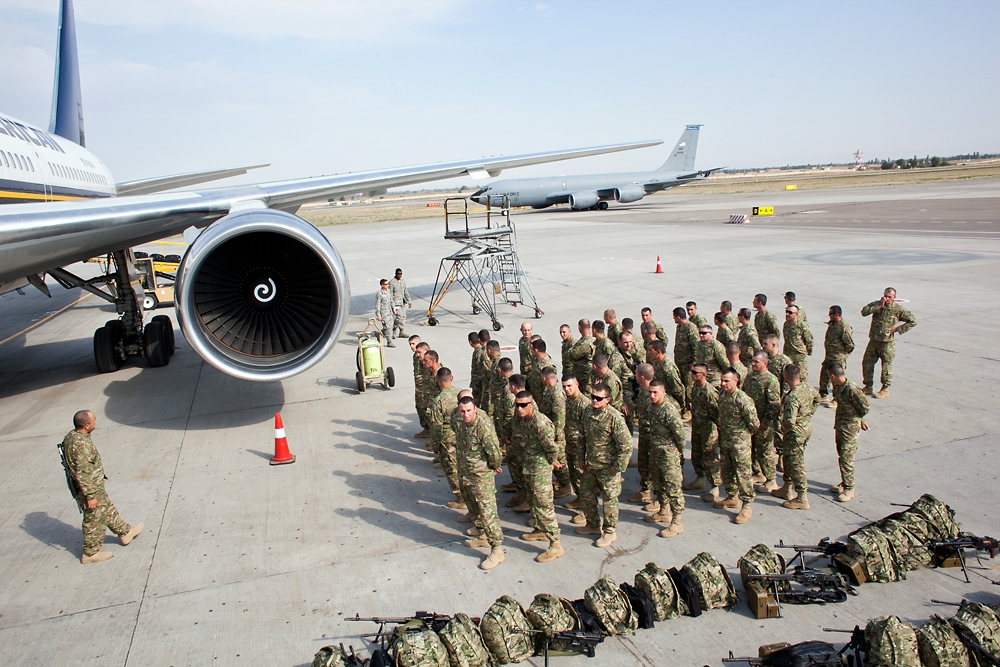 Georgian soldiers disembark at Manas Transit Center, in Kyrgyzstan, after a charter flight from Tbilisi in late September 2013. Bishkek stands to lose three percent of its budget when the base closes next year. (Photo: David Trilling)

When Turkish Airlines started transiting through Bishkek on its new thrice-weekly flights from Istanbul to Ulaanbaatar in mid-2012, the move was hailed in Kyrgyzstan as the start of a transition to a “civilian transit hub” that would replace the controversial American airbase at Manas International Airport.

Over the past year, Kyrgyz officials have repeatedly said that when Manas Transit Center, as the base is called, closes next July, they will convert the facility into a hub for air cargo crossing Asia – a caravanserai on a Silk Road of the skies. But few details have emerged and the idea, some fear, dodges an urgent question: where will Bishkek make up the budget shortfall after kicking out the rent-paying Americans?

Since opening in December 2001, the base has been a cash cow for the impoverished Central Asian state. In 2012, the base contributed $142 million toward Kyrgyzstan’s economy, including $60 million in rent, or roughly three percent of the government budget. It also generates about 700 jobs for local residents.

The International Monetary Fund has warned the impending closure will have an adverse effect on the economy and the country’s donor-dependent budget. “The closure of the Manas Transit Center in 2014 is creating headwinds for medium-term fiscal adjustment,” the IMF said in a statement that circulated on October 7.

Asked about the shortfall, Prime Minister Jantoro Satybaldiyev avoided specifics. “Of course, the $60 million [in rent] will have to be covered by other income. The government is working on it. I hope that by the next year we will be able to cover these expenditures with economic development, the creation of new jobs, and by launching new factories,” Satybaldiyev told EurasiaNet.org in an interview last month.

Of persistent rumors the Pentagon was seeking to extend the lease on the base, despite Russian insistence it close, Satybaldiyev added: “From the American side, there have been no offers that would interest Kyrgyzstan.”

US officials are tight-lipped about the future of the base, but they do point out that the American military has spent almost $82 million upgrading facilities at the airport, in addition to landing fees, rent payments, and local procurement.

It seems that no major visitor arrives in Bishkek without mentioning the hub project, which President Almazbek Atambayev, in a January 21 decree, declared of “strategic importance” to Kyrgyzstan. During Chinese President Xi Jinping’s visit in September, Kyrgyzstan’s Economics Minister Temir Sariev said the Chinese were eager to help with the project; but details were scarce. During a visit to Bishkek in April, Turkish Premier Recep Tayyip Erdogan said Turkey was eager to share its experience; but, again, there were no concrete proposals. And last September, during a visit to Bishkek, Russian President Vladimir Putin promised support – without delving into details.

The Manas Airport website says the airport, with its “unique location,” could be “one of the largest multimodal aviation hubs in the Eurasian region.” A map on the website shows flight paths from Bishkek to dozens of diverse locations, including Casablanca, Singapore and Oslo.

Kyrgyzstan’s airports have seen impressive passenger growth over the past few years. According to the National Statistics Agency (which does not break down numbers by airport, but Manas is by far the country’s largest), annual passenger numbers doubled between 2008 and 2012 to 800,000. Travelers at Manas today find more efficiently run facilities, more international flight options, and even a choice of duty free shops.

But on the cargo side, there is little to show for all the hype. No major contracts of note have been reported. The Transport Ministry, responsible for implementation, refused to answer EurasiaNet.org’s questions.

In an interview last December with Fergana News, Emil Karymbaev, Manas airport’s vice president, urged investors to hurry, admitting competitors – airports in Baku, Almaty and Navoi, in Uzbekistan – are ahead of Bishkek. He said a hub could nearly double Kyrgyzstan’s GDP with a modest investment of $300 million, by, for starters, luring business away from Almaty to Bishkek.

Marat Kazakpayev, a political scientist at the Kyrgyz-Russian Slavic University in Bishkek, is not convinced the project merits investment. Airlines transiting from Europe to Asia do not need a place to stop, he says, especially in a small country like Kyrgyzstan where, unlike in booming Almaty, there is little demand for cargo.

“There are already many civil hubs in the region: Urumchi [China], Navoi, some in Russia, like Novosibirsk, and in Kazakhstan, Almaty and Astana. This is nothing new. They work well and it will be difficult to compete with them,” Kazakpayev said. “The creation of a hub should be driven by business, not politics. Atambayev and his team don’t seem to understand that. Yes, Russia may help build some infrastructure, but that’s not enough to attract international businesses to use it. Maybe at first Russia will find some money but then it will see how difficult it is for this hub to function with all the alternatives.”

Another concern for financiers may be Kyrgyzstan’s volatile investment climate. For most of the year, the fate of the country’s largest taxpayer, the Kumtor gold mine, has been plagued by uncertainty as parliament and the government fight over a restructuring deal.

When Putin promised support for a transit hub in September 2012, he conditioned it on the American withdrawal. Should that happen, Fergana News quoted him as saying at the time, “we will be ready to join in providing it with concrete economic substance.”

A year later, Kyrgyz officials might be asking themselves: How does Vladimir Vladimirovich define “concrete”?