Kyrgyzstan: Protests flourish as crises mount on all sides

Acting President Japarov came to power on the crest of rallies, but will he know how to deal with them as leader? 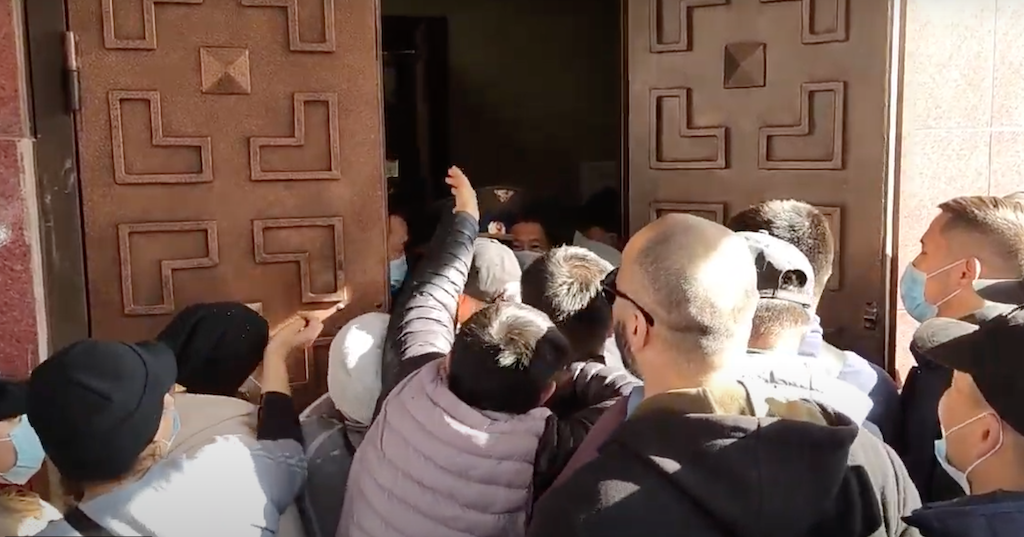 Participants of the Dordoi rally attempt to barge into the Government House. (Photo: YouTube screenshot)

Sadyr Japarov came to power in Kyrgyzstan by exploiting and directing street anger.

But the prime minister-cum-acting president may learn before too long that testy crowds are a sword that cuts both ways.

There was some evidence of that on Bishkek’s streets on November 2 as a bewildering number of simultaneous low-level demonstrations unfolded over a matter of hours.

Seemingly the most consequential one involved traders from Bishkek’s colossal Dordoi bazaar, who assembled in front of the Government House to complain that they have for weeks been unable to take receipt of goods arriving from China. They blame Kyrgyz customs and border personnel for the holdup.

“We are making phone calls to China. There they tell us that the borders are open, but Kyrgyzstan isn’t letting things through,” one trader was quoted as saying by Kaktus news website.

Kaktus has reported previously, on the basis of reports from freight companies, that some trucks are being held at the Torugart crossing for periods of up to three weeks. The cause has been attributed variously to last month’s political unrest, and the confusion provoked by the subsequent behind-the-scenes scramble for government posts, and the ongoing COVID-19 pandemic.

"Entrepreneurs already suffered a loss of income during the pandemic. And nobody at the customs office can give any explanations," one entrepreneur told Kaktus.

The State Customs Service, meanwhile, insists everything is in order.

But even the Chinese ambassador in Bishkek, Du Dewen, has put lie to that, stating that bilateral consultations are planned for November 6 to review how to bring activities at Torugart and at another crossing, Irkeshtam, close to capacity.

Participants of the Dordoi demonstration at one point reportedly attempted to barge into the Government House through a side entrance in scenes reminiscent of the mayhem that prevailed in Bishkek for almost 10 days in October.

A smaller rally, also convened at the Government House, addressed another pressing quality of life issue. A couple dozen people attending that meeting demanded the resignation of National Bank chairman Tolkunbek Abdygulov and called for an amnesty on outstanding personal debts.

“Let the banks not deprive us of our homes. The coronavirus pandemic has left a deep mark. We are simple people who are unable to pay unbearable debts, because we have a crisis going on now, but still the banks are demanding we pay off loans,” one protester was quoted as saying by 24.kg news agency.

Japarov spoke about amnesties last month, but not for small-time debtors. The beneficiaries of his proposal were people who earned their money through corruption or evaded taxes. The idea being to generate a windfall for the state coffers by forcing some illegally acquired money out of the shadows.

One apparent early beneficiary of this still-unenacted policy was Rayimbek Matraimov, an elusive, former top customs service official whose name has for anti-corruption activists become a byword for graft. Matraimov decided to hand himself over to the authorities on October 20 to face some light questioning over allegations he has presided over a vast smuggling operation.

To much dismay, a judge ruled to immediately release Matraimov and allow him to remain under house arrest. The State Committee for National Security, or GKNB, said he had already begun paying back $24 million in damages it said he owed the state. That sum is markedly lower than the $700 million that investigative journalists claim he has siphoned out of the country over the years.

Abdygulov, the National Bank chairman, meanwhile, has other pressing concerns. The national currency, the som, is feeling upward pressure against the dollar in the wake of similar tribulations in Russia, to whose economy Kyrgyzstan is deeply connected. The National Bank last week sold $42.4 million worth of its dollar reserves – the largest intervention it has undertaken in the last half year – in an attempt to stabilize rates.

Another rumbling controversy has to do with management of Severelektro, the entity that runs the Bishkek power plant and provides electricity to the city. The company board, seemingly as a result of political interference, late last month dismissed Doskul Bekmurzayev from his job as general director. This sparked protests from employees angered by the sense that the company has become just another morsel being fought over by figures close to the new ruling elite.

“At the moment, people without any experience in the electricity industry are being appointed to positions of responsibility on the recommendation of members of parliament, deputy ministers or officials,” Tolumush Kozhomkulov, a member of the Severelektro board, told reporters last week.

A group of Severelektro employees again came onto the streets on November 2 with demands to see the original copy of the resignation letter that the company’s senior management claims was signed by Bekmurzayev.

Rumbles of discontent at the utility company come at a particularly delicate time as the country’s capital enters the coldest months of the year. The city had a brief scare on October 29, when entire areas of the center suffered hours-long power and heating system outages as a result of what officials say was an automatic shutdown provoked by a system failure of high-voltage transmission lines.

There were also rallies of a more specifically political nature.

A small group of members of something called the Women's Movement mustered outside the White House parliament and presidential offices, which has been out of use since it was gutted in a fire set by rampaging mobs on the night of October 4, to express their opposition to planned changes to the constitution.

"We are opposed to the fact that everyone who comes to power wants to change the constitution to favor their own interests,” one participant was quoted as saying by Kaktus.

Yet another crowd, of several dozen people, formed outside the premises of the GKNB to urge the release of an imprisoned former deputy Interior Minister, Kursan Asanov.

Asanov has had a tumultuous time of late.

In August 2019, he was fired as deputy interior minister and then arrested, all in the space of a few days, for his handling of the armed standoff that culminated in the arrest of former President Almazbek Atambayev. He was then charged with abuse of office.

In the wake of last month’s unrest, however, Asanov reclaimed his status as a top security official by appointing himself the commandant of Bishkek, in effect taking control over the city’s safety.

He quickly fell out of favor with the new people in charge, however, and was re-arrested on charges of instigating a bout of street violence that occurred on October 9.

While these scenes were playing out in Bishkek, Japarov was in a whole different part of the country worrying about other things altogether. Speaking during a visit to the southern Batken province, he talked about the need to merge the Border Guard Service with the GKNB. The border service was spun off into a separate body in 2012.

The GKNB’s new chief and long-time Japarov comrade, Kamchybek Tashiyev, went along for the trip to Batken.

“The standard of living of the local population, the problems connected with the border – these are issues that cause me worry. Batken is a strategic region. It is located far from the capital and it borders two neighboring nations. For that reason, we must give it particular attention,” he said.